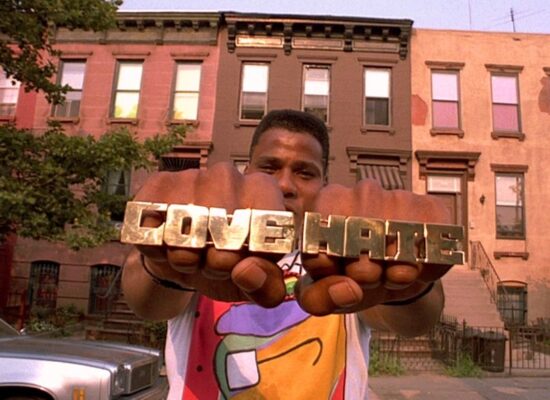 Do the Right Thing (1989), a provocative piece set in 1980s Brooklyn, is an audacious directorial dive into the underlying forces of racial tensions. Bound to stimulate generations of heated discussions, Spike Lee’s film retains its resonance even decades after the film first appeared on screen. It is a film that screams and roars, startling and even upsetting in its outspokenness.

The film follows Mookie (Lee) delivering pizza in the Bedford-Stuyvesant part of Brooklyn. The racial tension is further exacerbated by an overbearing heat wave. The Italian Pizzeria owner Sal (Danny Aiello) debates with his son Pino (John Turturro) about keeping the restaurant, the latter being intolerant of the majority-black customers. When Buggin Out (Giancarlo Esposito) argues with Sal about not including African Americans on the Hall of Fame of the pizzeria, the racial hatred reaches its first of many boiling points.

Spike Lee’s filming techniques give each act of racism an intentionality. The montage zoom-ins of actors spitting out monologues of racial slurs is enough to make one wince. The crude terms that are thrown out jokingly shows how commonplace racism is. In scenes of confrontation, closeups of the actors’ faces deliver a feeling of oppressiveness.

Chaos is spilling out everywhere in the film. It’s in the dialogues, the flashy outfits, and saturated backgrounds. A casual remark is circulated in a crowd until its meaning changes and withers into a sobering thesis for racism: a stereotype. It’s horrifying to see how one simple misinterpretation jumps to outright aggression.

As Radio Raheem (Bill Nunn) shows, the cycle of life is of love following on the heels of hate. Except that Bed-Stuy makes too little effort to defend love. Spike Lee shows how cowardly people look away when hatred sparks into the fire of violence. Consider Sal’s avoidance when his son bullies the mentally-disabled Smiley (Roger Guenveur Smith), or the locals’ obliviousness when the Korean market couple is attacked.

Spike Lee uses snippets of these unresolved conflicts to foreshadow the dramatic ending. But is the ending surprising? Not at all, considering all the other racial injustice in history. When injustice regularly occurs, the community finally snaps. This is what Lee tries to show here—characters slowly losing control of their senses and descending into chaos.