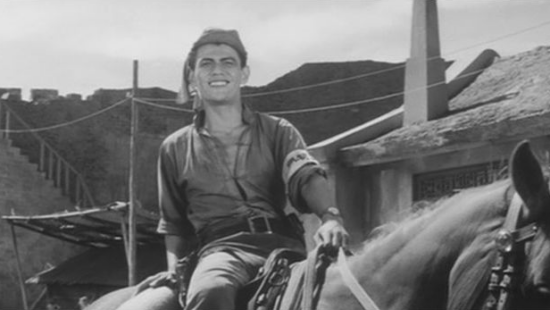 Desperado Outpost (Dokuritsu gurentai, Japan, 1959) starts with shots of a man on horseback in a landscape reminiscent of a Western. This hero is Japanese, and the action is set in the wide-open spaces of the Manchurian steppe in the summer of 1945 near the end of the Sino-Japanese War. Okamoto’s approach to the war includes aspects such as the “comfort station” (ianjo), where women were exploited as sex slaves. He does not dwell on this topic, taboo in post-war Japan, but it does become clear that former military nurse Tomi (Izumi Yukimura) became a prostitute simply in order to survive. Desperado Outpost deals with the desperate situation of the Japanese troops in Manchuria at that late stage in the war and with their retreat. However, it presents history in an entertaining genre mix in which the Western meets the detective story, the war film, and the comedy.

The storyline is constructed like a police investigation, with the central character, Okubo (Makoto Sato), posing as a journalist and determined to find out the truth about his brother’s death in the garrison in Northern China. What he discovers is intrigue and corruption. Fearing exposure for their embezzlement of funds in order to smuggle opium, the deputy commander Fujioka (Tadao Nakamura) and two accomplices have killed Okubo’s brother and his lover, disguising the murders as a double suicide. Okubo also finds out that there is enough food in the garrison, whereas the soldiers at the so-called Desperado Outpost are starving.

These facts are presented in an almost casual way that mixes thrill and adventure with laughter. This is particularly obvious in an early sequence in which Fujioka uses human targets for shooting practice. However, what looks like a brutal act by an oppressor soon turns into a farce. Okubo, who witnesses such a shooting, then intervenes to prevent Fujioka, immediately identified as a villain, from shooting at a young woman. She escapes, and the elderly Chinese, who had appeared to be shot dead, gets up and runs off. A killing is thus travestied into a comic moment, revealing the impotence of this mighty Japanese officer and ridiculing him.

Okubo, by contrast, is presented as an excellent marksman with almost superhuman skills who survives shootings and bombings. Makoto Sato plays the character with juvenile charm as an easy-going and good-humoured man whose credo is to escape when he senses danger (“Whenever my palm gets itchy, I run like hell.”). He is the lonely rider who, not unlike many heroes of the American West in film and literature, tries to avoid the complications of a love affair. He is, however, shattered by the death of his fiancée Tomi, who has followed him against his will. Unlike the typically silent hero of Westerns, he is talkative, and his ever-smiling face and Sato’s exaggerated acting also contrast with the model imported from Hollywood. 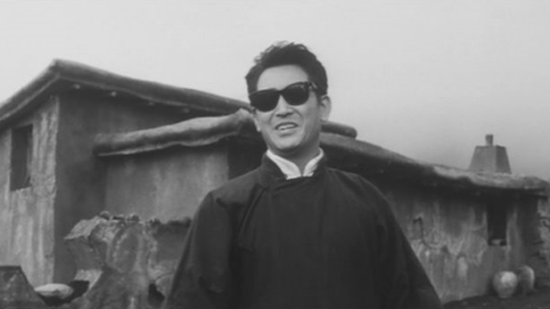 Okubo is an open-minded man and befriends the Manchurian bandit Yang Yadong, played by Koji Tsuruta, the Japanese star of many samurai and gangster films. This bandit chieftain – a kind of Asian Robin Hood – is a glamourous figure who wears a long Chinese robe and fancy sunglasses. Like Okubo, he too is an adventurer, but one with a romantic aura. Realism is revisited not only by characters familiar from other genres but also by the recourse to comedy and satire. In the scenes in which the soldiers march with dancelike movements, humour comes close to slapstick. 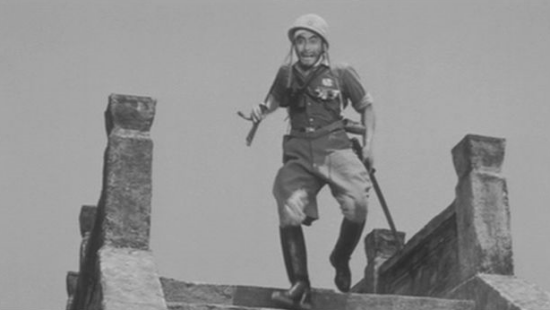 Sachio Sakai’s and Mickey Curtis’s clownish expressions and gestures contribute to this humour, which challenges the violence of other sequences. Shots of two members of the Desperado unit who are always gambling and quarrelling become a running gag in the second part of the film. Toshiro Mifune is cast in the small supporting role of the garrison’s commander, who went mad after he had been pushed from the ramparts by one of his deputy’s accomplices. In one sequence – voice cracking and eyes rolling – he warns of air strikes and shouts absurd orders to two prostitutes who are washing clothes in the river and whom he mistakes for soldiers.

There are some original formal devices that also go well beyond realism and war film conventions. Extravagant camera angles, as in the scene in which the two prostitutes are filmed through the commander’s legs, and frequent close-ups create unsettling moments. Masaru Sato’s soundtrack, interspersing oriental tunes with musical references to the Western, is another way in which the war film genre is subverted. The atmosphere of strangeness created by the framing and the music together with the humour imbue Okamoto’s representation of war and violence with a strong sense of absurdity. A dice falling accidentally from a roof leads to the final catastrophe during which hundreds of men, including all the remaining Japanese soldiers, die, except for the protagonist. The dice rolls slowly, creating a moment of suspense, but the Chinese soldiers realize that there are still Japanese hiding in the apparently deserted garrison. This leads to the death of the two gamblers and a sudden end to their comical contributions to the film. 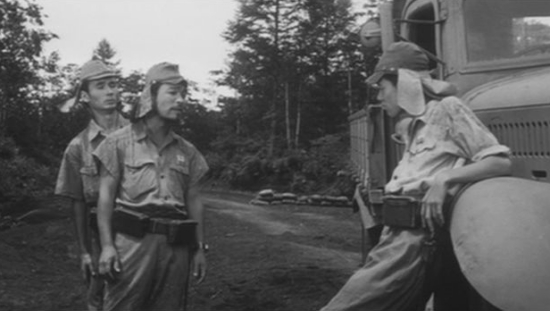 In Desperado Outpost, death is anything but honourable. The film targets a corrupt military system whose victims are also its own soldiers, in particular the Desperado unit, which is abandoned behind enemy lines. This is an allusion to the victimization of Japanese soldiers after the war in a great number of films but – despite acknowledging this victimization – Okamoto avoids celebrating the sacrifice of lives. Heroism in combat and sacrifice are challenged by humour and sarcasm that highlight the absurdity of war. This use of humour and sarcasm also creates distance, undermining any identification with a hero. Even Sergeant Ishii’s (Ishiro Nakaya) fearlessness (when in desperation, he charges the Chinese troops, fifty times superior to the handful of Japanese soldiers) is presented in a matter-of-fact way, with no hint of glorification.

The battle is treated in a cartoon-like manner that precludes emotional involvement and underlines the ultimate absurdity of such violence. In doing so, it also prepares the ground for reflection on the meaning (or the meaninglessness) of violence and war. Okubo, the only Japanese who no longer has a reason to live, miraculously survives the carnage and decides to join the bandits, a happy ending as in a fairy tale and pointing to illusion at the core of filmmaking. The humour in the film repeatedly supports this impression, underlining Yang Yadong’s statement that war is ridiculous. Desperado Outpost effectively shows that war is indeed absurd.