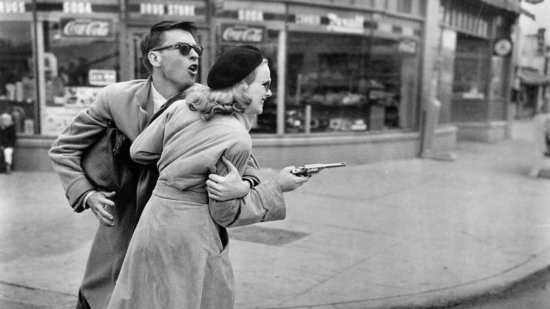 As the clocks turn back and the weather turns cold, I turn back to my favourite genre, film noir, transforming “Noirvember” into one of my favourite months.

Joseph H. Lewis’ Gun Crazy (1950) came after two other noir couple-on-the-run films, Fritz Lang’s You Only Live Once (1937) and Nicholas Ray’s They Live by Night (1949). Unlike the other two, which present their amour fou couple within a sentimental framework, Gun Crazy is much more ambiguous and anything but sentimental and rejects any romanticism and suggestion that its protagonists, Bart (John Dall) and Annie Laurie (Peggy Cummins), have a constraining society hostile to the individual to blame for their crimes and destiny. In They Live by Night, Bowie (Farley Granger) and Keechie (Cathy O’Donnell) are an innocent couple in their early twenties. They are poor and they have few options for a better life, but they do hope to attain it in earnest only to find out that their young love is hopeless and that their attempt to escape from a cheap and insensitive reality is doomed. In You Only Live Once, Eddie Taylor (Henry Fonda) is an ex-con about to marry Joan Graham (Sylvia Sidney). They are a decent couple and Eddie is determined to have a better shot at life as an honest man, but is forced back into an illicit life after a frame-up.

There is nothing forced-upon or innocent about the couple in Gun Crazy. And there is no obvious explanation for Bart and Laurie’s violent behaviour. They left behind any sentimental theme that somehow often managed to permeate even the bleakest of classic American film, film noir, and instead looked towards Arthur Penn’s lethal couple in the neo-noir Bonnie and Clyde, 1967, a movie that would be so much appreciated for its antiestablishment politics, brutal realism and mesmerizing beauty, all in one. Warren Beatty and Faye Dunaway may form a more scintillating couple, but Laurie and Bart are the most blatantly sexual couple (“I saw the two of you, the way you were looking at each other tonight, like a couple of wild animals. Almost scared me,” says one of the characters, Packett, to which Laurie replies, “It should. He’s a MAN.”), pushing the Production Code as far as it would go, and it is Peggy Cummins’ Annie who is not only more aggressive and venomous than Faye Dunaway’s Bonnie, but she is also, decidedly, one of the deadliest femmes fatales. “You can see the quiver in Laurie’s lips; and you know what this demon is about to do. This kid hasn’t got a chance,” the director, Joseph H. Lewis, said about his female character and her influence on her male counterpart. 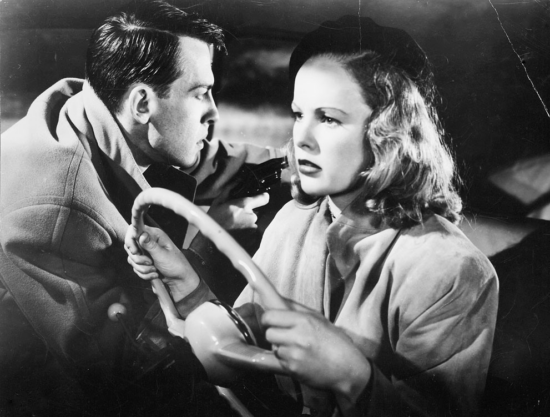 Annie Laurie Starr is a sharpshooter in a traveling carnival. Bart Tare has had a love-hate relationship with guns since childhood. “For Bart Tare, the gun’s appeal is metaphysical and beyond rational explanation,” writes Geoff Mayer in the book Film Noir: The Directors. “Holding it makes him feel good. For Annie Laurie Starr, its appeal is direct and literal. The gun offers excitement and power.” Annie seduces Bart to marry her and join her in a life of crime – that seems to be her only reason for living. Laurie is certainly the dominant one in the couple, both emotionally and psychologically, and director Joseph H. Lewis makes that clear in every possible shot. From the opening scene, where she is filmed from a low angle as if exerting an inescapable power of attraction over a Bart that is watching her transfixed as she swirls two firing pistols over her head, to the motel scene, where Laurie, dressed in a bathrobe, sits on the bed putting on her stockings while Bart cleans his gun, and he once again succumbs to her desires and commits to an outlaw life to please her, and even when he becomes morally conflicted, not sure of what is real anymore, and she pulls him right back in (“You’re the only thing that is, Laurie. The rest is a nightmare!”) – she is always in command.

What drives her? Newly married, Laurie and Bart soon run out of money and, bored by ordinary life, she wants “things”. The desire for “money and all the things it will buy” is what motivates her and her addiction to violence. Money drives her, but also the means to get it. She is attracted to the danger of getting it because that’s the only way to get it. And she wants to go side by side with Bart to get it. They choose to be criminals. But what first is purely physical attraction, surprisingly evolves into a more deeply emotional connection, leading to one of the most thrilling scenes in the film. After deciding they must part, they drive off in opposite directions. But after going a short distance, they both simultaneously stop, look back at each other, turn around and rejoin each other, a sign that they will remain together against society, against all odds, and then drive off in one car, Bart behind the wheel, with Laurie clinging to him. Her love for him had only seemed less obvious. This condemns them to an early end, but, once again, there was nothing sentimental about them, from the very beginning. 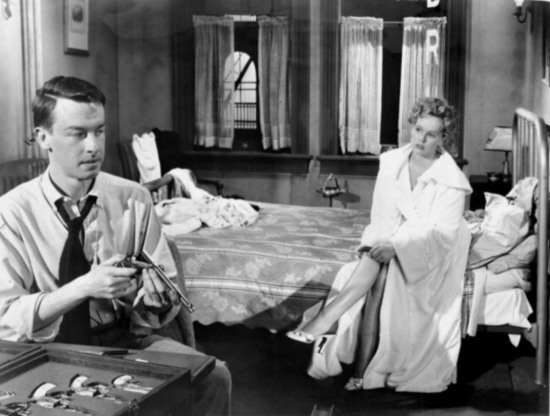 Peggy Cummins’ Laurie may be one of the definitive femme fatale characters, but her wardrobe is anything but, a far cry from the look of the classic film noir character and looking into the future, once again to Faye Dunaway’s Bonnie.

Faye Dunaway made her character synonymous with the beret, it was what gave Bonnie identity, confidence and sex appeal. But Arthur Penn actually put her in a beret in an homage to Peggy Cummins in Gun Crazy. There is no silky gown in Laurie’s wardrobe (costume design by Norma Koch), but her trench-style coat, wrapped around and tightly belted, is all she needs to indispensably place her in film noir. All her clothes, from her plain sweater (a signature item of the 1940s and 1950s) and her trousers (which leads to her being asked “Why are you wearing slacks?”) are more function than glamour, yet another element that enhances the liberation and unconventionality of the character and the realistic feel of the film, proving that Gun Crazy was ahead of its time. 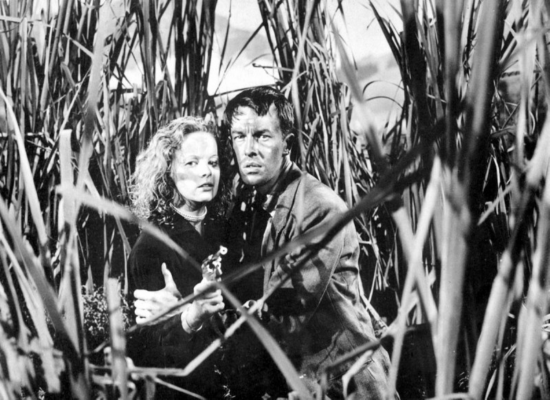