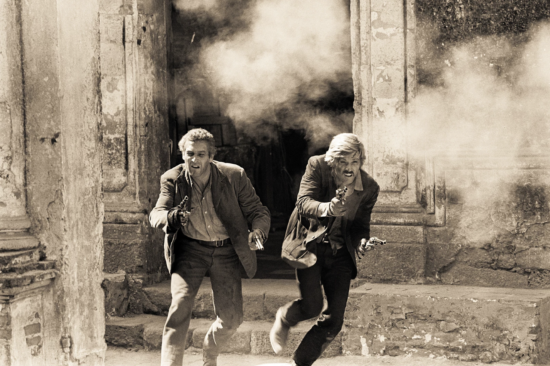 Henry Fonda gone bad, one of cinema’s most memorable endings with two of the greatest outlaws on screen fading into a photographic memory, and Montgomery Clift bringing in a new type of manly ideal and rivaling the man who was no less than the epitome of American manhood. These are the anti-heroes from three of the westerns that challenged the romantic notion of the West and brought in a new Western character archetype. They all wore black. 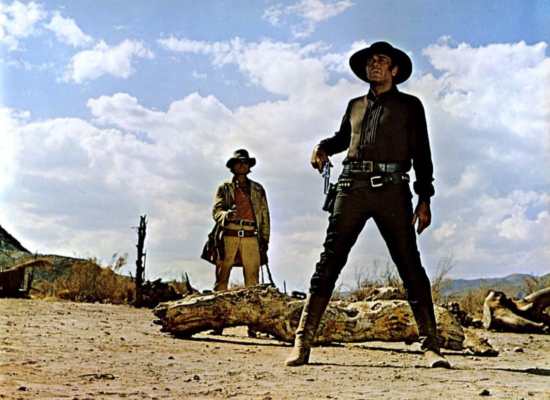 When Henry Fonda reveals his face in Once Upon a Time in the West (1968), a big American movie cliché was capsized. Fonda had thus far been associated with the family man, with the good guy, with the classic hero, with Wyatt Earp, and that’s what the audiences were expecting to see. But there is nothing good about his stone-faced, piercing blue-eyed Frank in Sergio Leone’s film, and that was one of my most satisfying experiences as a cinephile. Fonda declared that Leone had chosen him specifically “to heighten the anticipation of his character’s entrance,” as Ennio Morricone tells Alessandro de Rosa in the book Ennio Morricone: In His Own Words. “The viewers were supposed to see a strange figure stooping over the little boy paralyzed by fear. At that point, the camera would pan around the actor’s back and with a circular movement it would reveal his face.” Only then would the audience realize that was Henry Fonda.

The distorted electric guitar that introduced the theme of the character was used to further heighten that suspense. Sergio Leone was painstakingly attentive to the balance between music, noises and effects, and he stretched out to the limit the long and cautious silence that opens the film into an operatic crescendo, by filling it gradually with a different sound (from the wind, to a creaking mill, or a buzzing fly), and then slashing it with the guitar sound that was “intended to wound the audience’s ears like a blade the first time” they hear it. It was as shocking as the kid seeing his family killed and being himself killed thereafter. And as shocking as Henry Fonda playing the villain. Clad in black, his presence not only portends bad things to come, but represents death itself.

Sergio Leone wanted Once Upon a Time in the West (from a story by Bernardo Bertolucci, Dario Argento and Leone) to be his last western, and there is a sense of melancholy in the film, a film that is as much about a world vanishing in the face of rapacious civilization as it is about the end of a film era. The times were over, for the Wild West and for the Western, and even Fonda’s cold-blooded killer knows his times are over. 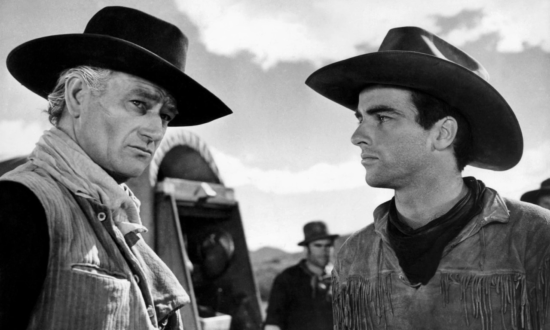 Based on the story “The Chisholm Trail”, by Borden Chase, Howard Hawks’ Red River is about the nation’s first major cattle drive. Tom Dunson (John Wayne) takes the road with the scope of setting up his ranch in Texas and after the Civil War he leads his ten thousand cattle out of an impoverished Texas to the richer markets of Missouri. Matthew Garth (Montgomery Clift) is his foster son who rebels against the tyrannical Dunson and steers the herd West by a safer route. The screen story however suffered major changes, the biggest of all being that, to Chase’s disapproval, Hawks did not let Dunson die in the end, averting an epic finale. I was disappointed, too, when I rewatched the film recently, because it is forced, a disruptive note in the narrative and a wrong ending to an otherwise great film. In a departure from his 1930s films, Hawks had started to go for happy endings, keeping alive the characters he liked, a move that undoubtedly had its commercial reasons. Both Wayne and especially Clift objected to the ending in Red River. By not allowing that emotional climax, Hawks questions the entire careful build-up of the character of Matt Garth and of the psychological story.

Red River is a quintessential American film not only because it is a story of perseverance and of pioneers, and because it has a bad (meaning forced happy) ending, but because it describes America through two opposing characters and two contrasting masculine presentations. There is Wayne on the one hand, who represents the old views and an unbridled manliness, ruthless, solitary, imperious, for whom the only things that count are his work and the road to be travelled. He was also the product of the Old Hollywood system. And there is Clift on the other hand, who represents the new views, more sensitive, vulnerable and tolerant, who ushered in another kind of hero and man, introducing a new kind of masculine beauty on screen and signaling the manly neurosis that would start with the 1950s and would reach far higher levels in the following decades. Furthermore, Clift was among the first actors who questioned and changed the power balance between actors and studio chiefs, playing a major role in breaking up the major studio system. He can rightfully be called an antihero.

John Wayne’s Dunson is a man who has lost the woman he loved because of a mistake that he made and now, more than ever before, he would stop at nothing to go through with his plans, free from other men’s laws and free to make his own law. “Because a man who has made a great mistake to get somewhere is not going to stop at small things,” Hawks explained, as noted in Todd McCarthy’s book “Howard Hawks: The Grey Fox of Hollywood”. This kind of character that is also played by a physically imposing man like John Wayne is difficult to overpower, especially by a “compact, refined-looking, five-foot-ten” kid, as Wayne described Montgomery Clift. Because it was not his acting abilities, which, although at his first major film role, he soon enough proved, and so naturally too, that were questionable, but how believable he would appear on screen as the rival of John Wayne. So Hawks guided Clift in a new direction, going for a subtle, pensively cool approach. In was all in the attitude.

The costumes helped, too. Howard Hawks was a director who payed a great deal of attention to the clothes of his characters. He gave the Red River actors, men and women, “Red River D” belt buckles made by a silverman in Nogales and based on the design Tom Dunson draws in the ground. He also wanted distinctive hats (including derby and stovepipe in addition to the regular cowboy hats) for the characters, “because he believed that this was the easiest way for audiences to recognize otherwise undifferentiated characters, such as the cowboys”. Hawks was so impressed by Montgomery Clift’s dedication to getting into his cowboy character that he gave him a weather-beaten hat Gary Cooper had given him. He also dressed Monty mostly in black to allow him to cut a stronger profile and make him believable alongside Wayne. And he was. If only Hawks had let him be until the end. 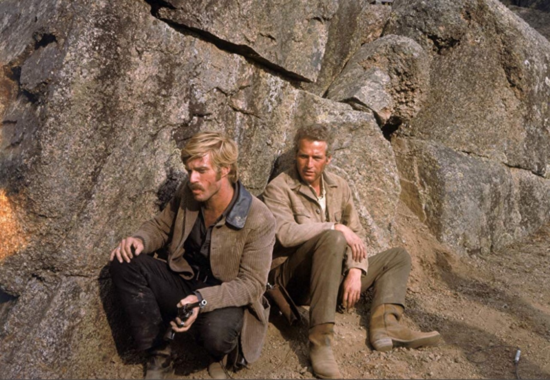 With the arrival of the 1960s and of films like Butch Cassidy and the Sundance Kid (at its 50th anniversary this autumn), American cinema left behind the sharp morality of Old Hollywood films and especially classic Westerns and dared to deal with people as individuals and their rebellion against society and against the norm and introduced more ambiguous characters and the outlaws as antiheroes: Paul Newman’s Butch Cassidy and Robert Redford’s Sundance the Kid robbed banks for fun and they won the audiences over with their charisma. The teaming of Paul Newman and Robert Redford was so magical that this kind of buddy chemistry has been attempted to replicate in vain ever since (the recent pairing of Leonardo DiCaprio and Brad Pitt in Once Upon a Time… in Hollywood came closer than anything before).

Bathed in cinematographer Conrad Hall’s sepia hues, George Roy Hill’s comically elegiac Western offers more visual interest than the two handsome, well-defined, contrasting characters, and more narrative substance than the good humoured situations and damned-fool heroics of its characters. It has to do with the depiction of real bonding and real friendship. Because despite common belief, that doesn’t come off that easily on screen or in real life. It also has to do, as Paul Newman was saying in a 1994 commentary on the film, with the way he and Redford gave each other space on screen, the way they gave each other the stage in turn. Paul Newman was the one who wanted Redford as his co-star (and George Roy Hill fought for him with the producers) and screenwriter William Goldman was recalling in an interview how everyone who hadn’t wanted Redford in the picture in the first place told Newman not to allow Redford to have so many close-ups. But Paul had no problem with that, because he always wanted to play opposite good actors, because only that way he could better himself. They both let each other have their moments and that’s true friendship and that’s chemistry and that showed in the film.

Edith Head was the costume designer, but the costumes for Redford and Newman were pulled out of stock at Universal and Western Costume Company. And truth be told, you never knew how much credit Head was due on any given film, as she often had no real design responsibilities and her real job was to make sure everyone was satisfied with the costumes and to sell the film to the press, often by making up stories from behind the scenes. She supposedly made one up from the set of The Sting, the second and, surprisingly, last film that brought Redford and Newman back together, four years later. As noted in the book “Edith Head: The Fifty-Year Career of Hollywood’s Greatest Costume Designer”, by Jay Jorgensen, the two supposedly both wanted a blue shirt and blue tie that would bring out their eyes and Head alternated blue between them in each scene. I doubt that either Redford or Newman showed the slightest interest in outshining the other or playing up their star personae card in the detriment of their characters. And the reality is that only Redford wears blue in The Sting.

He doesn’t wear anything blue as Sundance the Kid. He repeatedly wears black instead although not entirely in those respective outfits. One of them is head-to-toe black (shirt, trousers, belt and boots), except for a brown corduroy jacket with black leather shirt-style collar. His hat is also black, and his clothes are for sure used for hinting at his dark side. Unlike the reckless and daredevil Butch, the leader of the notorious Hole in the Wall Gang, an enthusiastic bank robber with a vision, Sundance is the golden boy with darkness within, quiet, ironic and cool, and the voice of reason. Their adventure does not end well, after all, but it is an ending that carries their memory in romantic legend.