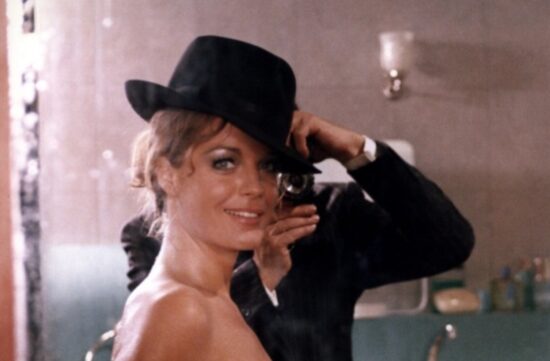 A bleak, dark detective story that taps into noir, Claude Sautet’s Max et les ferrailleurs (1971) is more than a “policier” film. It draws two fine character studies: Michel Piccoli’s Max, a former judge converted into a cop, and Romy Schneider’s Lily, a prostitute linked to a gang of hard-luck, two-time crooks whom Max wants to catch in order to restore his recently tarnished reputation in the department.

But he is “no ordinary policeman”, as his superior says. Independently wealthy, he renounced being an examining judge because he wanted to be in the midst of the action. His job is more than a job. He is a solitary, no-family man, a dedicated, methodical police detective, even amoral in his willingness to catch the criminals at all costs, even if this means planning the crime himself. Catching them red-handed becomes an obsession and his job is more like a rite to him, nothing deters him from his mission, and this monastic feeling that seems driven by an inner calling rather than policeman duty and righteousness, is evident in the way he dresses, too. His pin-striped black suit, white shirt, black tie and fedora are like a uniform (he is always buttoned-up, even when at home, playing cards), very much in the vein of Alain Delon’s Le Samouraï, or, as a matter of fact, a few others of Jean-Pierre Melville’s anti-heroes. The look in Max’s eyes, when filmed in close-up, is so blank and unflinching that he may very well be carrying a gun in his hands (you are almost surprised that he doesn’t when the camera moves away), that, indeed, he may very well be one of the criminals. Sautet inverts in fact the moral dilemma of the crime film and makes the criminals more sympathetic than the lawman. Nothing can disturb Max’s icy exterior, nothing distracts his attention, not even Lily. She is no ordinary prostitute either. She is the brain behind the gang of small-time criminals and it is her ambition that will get them all into trouble. 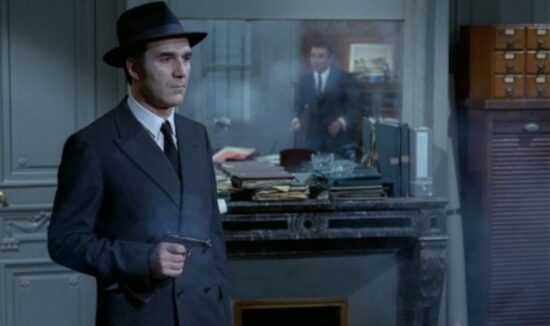 I would like to return for a moment to this association with Jean-Pierre Melville. Melville’s films are his own, an individualistic genre, infused by understatement and a sense of cool, an idealised world of mobsters and thugs, living and dying by a certain code of honour – “Melvillian” is part of the dictionary of cinema just as much as “Fellinian” and “Hitchcockian” are.

Claude Sautet however, with films such as his sublime first feature, Classe tous risques, from 1960, and Max et les ferrailleurs (“an unavoidable detour through the crime movies”, Truffaut named them), had much to bring on his own to the genre. Melville created a universe completely stylized, a world of men stripped by emotions, families, wives and lovers, and in his films it is undeniably this imaginary world that takes hold of you. Sautet’s stories, on the other hand, even those of cops and crooks, do not lose the human grip, as elusive as it may be (just as his other films, even the most lighthearted, have a dark vein running trough them). In Classe tous risques, Lino Ventura, terrific in his role, is a doomed man on the run, he has a sad, lived-in face. His clothes look lived-in, too. His trousers and jacket reflect his turmoil and disrupted life. Only when he goes off to settle matters with his former partners does he put on a trench coat. He has to look like he means business, because he does, and his children are his only drive. He cannot escape his fate, but he must do right by his children. You may not condone his criminal past, but you understand the actions that drive him now. In the same sense, you may not understand or approve of the life of characters such as Max or Lily, but Sautet has the ability to create these moments when you root for them, and which seem anchored in everyday reality. 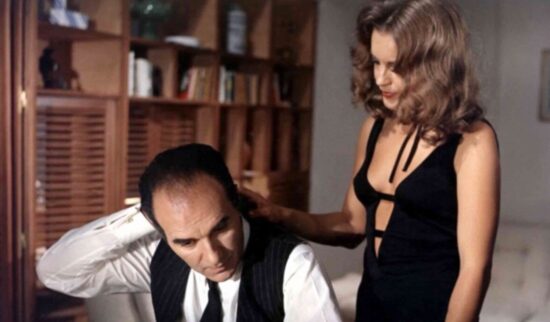 There is a scene when Lily takes a bath in Max’s apartment. He throws her his hat and takes pictures of her naked and wearing his hat. It is Max who is playing her, paying her not for sex but for spending time with him, toying with her body and her emotions to scheme his plan. But using her for criminal thought inception won’t leave him unscathed. He does have a breaking point but it remains unseen right until the end. And the end will take you completely by surprise. This impenetrable character is all the more surprising, brilliantly conceived and played, as he is playing opposite one of the most beautiful women in the history of cinema, Romy Schneider.

“She was not only a magnificent actress, she was a star,” is how Michel Piccoli spoke of Romy in an interview for L’Express in 2000. They were friends and had a wonderful rapport on the screen, and worked together on a few Claude Sautet films – Piccoli was in fact reticent to accept the role of Max because he considered Sautet shouldn’t have brought him and Romy back together on screen so soon (they had made Les choses de la vie a year earlier). “I called her ‘la schleu’. I said to her, ‘You are ugly today, badly made up.’ It reassured her that I spoke to her like that. People are so suspicious of these exceptional people. It is terrible to be a star. All the more so when one is a woman. Of course, there are more painful things, but it is a permanent aggression. Sometimes people ask me if I suspected this tragic fate that Romy was going to have. I had no doubt about it. Since I met her, her life had been a tragedy … On the one hand, she represented this splendid and happy woman. On the other hand, she always had this terrible pain that she carried with her.” 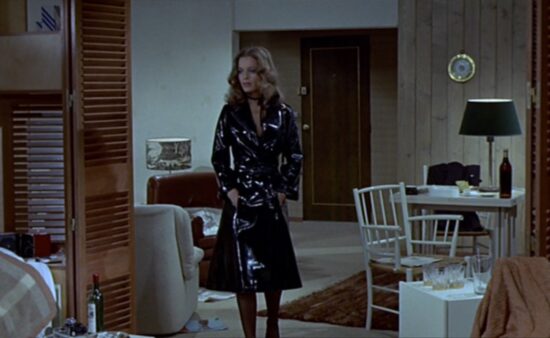 She is again wearing Yves Saint Laurent in Max et les ferrailleurs. But this in no way distracts us from the plot. Because Yves Saint Laurent had an “immediate and astounding sense of costume”, in the words of Roland Petit. The designer chose a very sexy wardrobe for Romy in this film. Violet or red low-cut dresses, form-fitting black dress with plunging neckline, ribbon tied around the neck, and the black patent trench coat – the revival of the vinyl trench five years after Catherine Deneuve wore hers for another prostitute role, that of Severine in Luis Buñuel’s Belle de jour.

Saint Laurent’s spring-summer collection from 1971, dubbed “The Forties” or “Liberation” collection, was surrounded by controversy as the square shoulders, bouffant sleeves, platform shoes, shortened dresses, seductive make-up alluded to “the women of easy virtue” in Paris during the occupation. “This collection, which everyone is calling kitsch, was a reaction to the absurd direction fashion was taking… So I conceived my collection as a humorous protest which everyone took seriously,” Saint Laurent remarked. He was already thinking of giving up haute couture, because his real public were “young, working women” and he wanted to make garments to reflect them and the women he personally liked. “I don’t see the point of changing garments from one season to the next if they are right, whether it’s a pea jacket or jeans, a tuxedo or a trench coat. This was so true that I wound up making the same things for couture and for ready-to-wear. The more perfect the garment, the simpler it is.” Yves Saint Laurent not only changed fashion, but he left a particular mark in cinema, too. He had this great ability to understand a personality and an era, therefore a movie character, too, and translate them into clothes that were an expression of the women beneath them. That’s why so many directors, from Truffaut to Buñuel and Sautet wanted to work with him.

Lily is wearing jeans, a plain t-shirt and a bomber jacket in the last sequence. It’s a completely different look than what she wears until that moment. Finally, this is she, her real self, the woman behind the clothes, that we see, because, as a prostitute, she’s only playing a role. How more eloquently than through clothes can this separation be made? 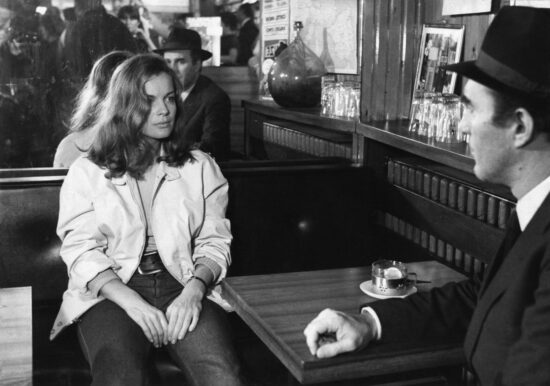