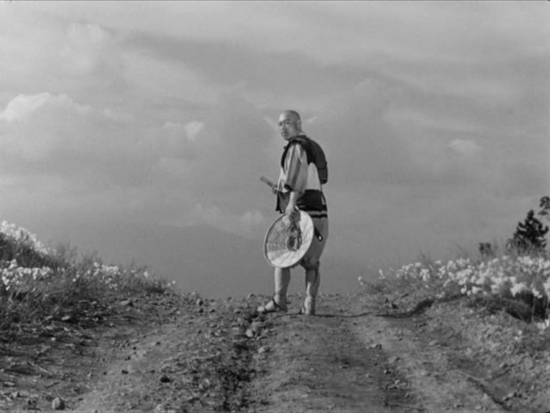 Seven Samurai (Shichinin no samurai, 1954) is one of those rich and complex films that one never tires of watching over and over again. Much has been written about Akira Kurosawa’s masterpiece, but the emphasis has rarely been on music. This article is my very humble attempt to have a closer look at Fumio Hayasaka’s haunting score, showing how perfectly it matches the film’s multi-layered structure. Hayasaka (1914-1955) started working with Kurosawa in 1948 for Drunken Angel (Yoidore tenshi). From then on and until his death a year after the release of Seven Samurai, Hayasaka wrote the scores for all of Kurosawa’s films except The Quiet Duel (Shizukanaru ketto, 1949).

Hayasaka’s score supports the changing pace of the narration marvellously and also contributes to the portrayal of some of the characters. Seven Samurai is set in the so-called sengoku jidai (1467-1600), the “Age of the Warring States”, a tumultuous period in Japanese history marked by almost constant civil war. Kurosawa’s depiction of this chaotic time is a means to deal with the recent past and with a present in which the wounds of World War II had not yet healed. Avoiding the use of stringed instruments (except for the interlude and the use of a cello and an acoustic guitar in two scenes), Hayasaka’s symphonic approach puts the emphasis on violence. The music also reflects the way Kurosawa combines action and human tragedy with humour and, by celebrating human inborn energy and the potential for regeneration, shows that life and death are two sides of the same coin.

The film’s credits appear against a black screen and are accompanied by repeated rhythmic drumbeats. The first shots are of a landscape at dawn with a group of riders appearing as dark silhouettes set against the morning sky. These are the bandits planning to sack a village. The rumbling, unnerving sound reflects the menace they represent and corresponds to the on-screen focus on fast movement. The film’s main theme, related to the seven samurai, is heard in several orchestral variations (strong and confident, slower and more dignified, triumphant). The drumming associated with the bandits is one of the most important of the other motifs in the score, occurring with rhythmic variation throughout the film. Others evoke rural life – a plaintive wordless male choir expressing the misery and despair of the peasants and more light-hearted rhythms accompanying the pastoral scenes – the planting and harvesting. There are also motifs associated with Kikuchiyo (Toshiro Mifune), one of the film’s central characters, with the young lovers Katsushiro (Isao Kimura) and Shino (Keiko Tsushima), and with the villagers’ search for samurai to protect them from the bandits.

The “Samurai Theme” (wind instruments, low-register piano) is at first a reference to Kanbei (Takashi Shimura), the leader of the seven masterless samurai who are willing to defend the village, but it is then extended to the whole group. It is played in an optimistic march-like manner, to underline the pride of the samurai when Kanbei continues his wandering (after having rescued a small child taken hostage by a thief) and young Katsushiro, the witness of this elderly samurai’s noble deed, follows him to become his disciple. A darker version of this theme is heard when Kanbei refers to his unfulfilled dreams and the transience of human life. This same melancholic variant turns into a lament when the first of the seven samurai has fallen in battle. 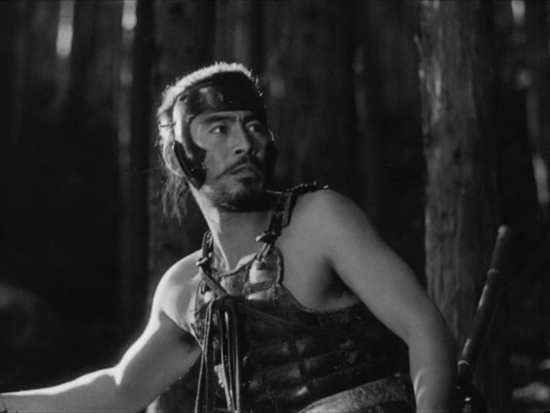 The dramatic and psychological function of the music is also at work in the very lively melody inspired by the rhythm of a mambo and played on baritone saxophone, piccolo and bongos that is associated with Kikuchiyo. This peasant who wants to be a samurai is a tragic-comic figure, played by Mifune with a mixture of comic exaggeration and naturalism. The mambo rhythm matches his performance in a number of very funny scenes, including the one in which the drunken Kikuchiyo is chased around in the inn by one of the six samurai, and in the famous scene in which he catches a fish with his bare hands. This mambo theme is played for the first time when Kikuchiyo tries to attract Kanbei’s attention with wild gestures and movements. Kanbei ignores him and leaves, and this rejection is underlined at the level of sound by the proud march-like variation on the “Samurai Theme”. Once Kikuchiyo has nevertheless been admitted to the group as the seventh samurai, this theme is associated with him too. Its melancholic version is heard in the background after Kikuchiyo’s monologue in which he accuses the samurai of being responsible for the tragic fate of the peasants, thereby revealing his peasant origins. Joining the peasant Rikichi (Yoshio Tsuchiya) in the stable (“I won’t sleep with them [the samurai]”), he expresses his disgust for the social status he was longing for.

The mambo theme figures again in scenes in which Kikuchiyo acts autonomously without Kanbei’s knowledge or authorization, for example when he sneaks into the bandits’ camp. The lively character of the mambo theme is challenged for a brief moment when Kikuchiyo steals the leather armour of one of the bandits, who has been executed for desertion by his chief. Kikuchiyo’s slightly exaggerated facial expressions and body language are those of a child discovering a new toy, and he seems to regard violence as a big adventure. When he takes the armour and the helmet from the dead bandit, the light-hearted mood of the mambo theme is distorted by dissonant chords, as if pointing to the dark side of Kikuchiyo’s childlike character. 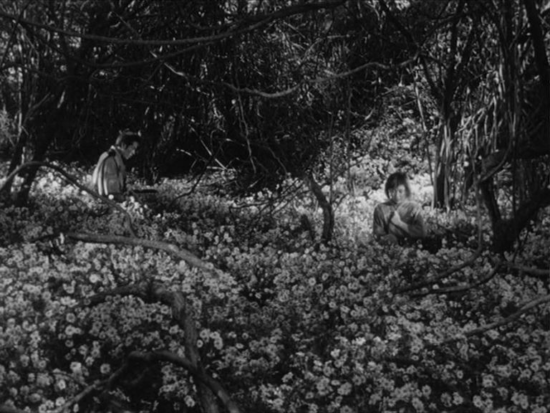 The “Love Theme” is a gentle melody, first played on flutes and bells in the romantic scenery of a meadow with flowers in bloom. When Shino, the peasant girl, lures the young samurai Katsushiro into a hut the evening before the final battle, a less gentle version of this theme features an acoustic guitar and a flute. Now it is associated with the flames of a campfire that cast disturbing shadows on the figures of the two lovers before their first sexual encounter, infusing the scene with emotional intensity. Woodwind instruments, low-register piano and bamboo stick percussion produce very rhythmic music for the harvest scene, in which the activity of the peasants and of Kikuchiyo, who joins them, is reinforced by camera movement and editing. In this scene, a playful melody complements the scene’s witty dialogue and comic elements. The music accompanying the first recruitment scene is similarly light-hearted, with woodwind and horns supporting the visual impression of self-confident men strutting around like peacocks. Here again, the lively character of the music matches the animated rhythm of the scene – the samurai in close-ups or medium shots passing in front of the camera quickly, their movements supported by the editing. The lively music comes to an abrupt end when one of the samurai is offended by Rikichi’s offer and angrily pushes him to the ground.

It is, however, the “Samurai Theme” which occurs most often and in different variations, each with its own dramatic, moral, and psychological implications. When Kanbei learns that the peasants eat millet instead of rice, which they reserve for the samurai, a low-register version of the theme is heard in the background. The volume increases when the ashamed Kanbei accepts being hired by the peasants and Rikichi bows gratefully. The same theme, played in a triumphant manner that is emphasized by the use of a trumpet, is heard when Kikuchiyo plants the samurai’s banner on the roof on one of the huts in the village. The screaming of the peasants, mourning their first victims, stops and Kikuchiyo’s gesture rouses their fighting spirit, underlined at the level of sound by the trumpet call. 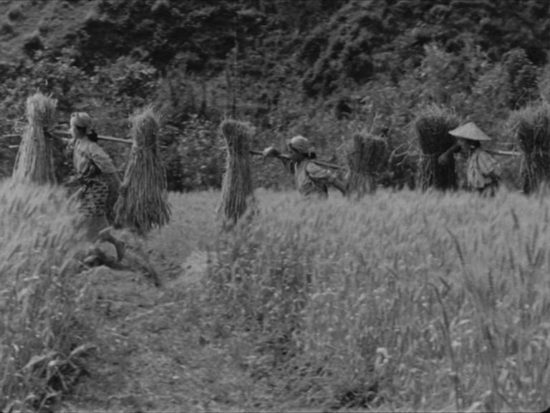 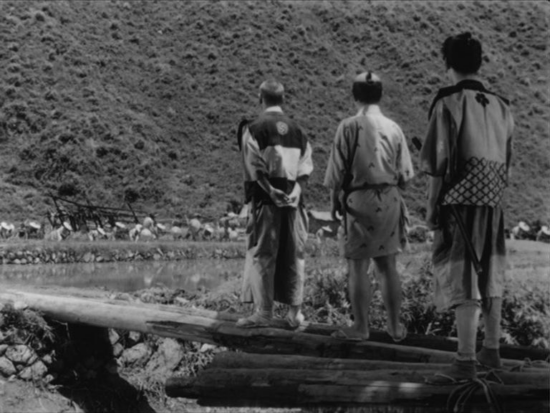 However, in the final sequence there is no expression of triumph. The music is now used diegetically: the women, planting the shoots in the rice paddies, sing a joyful song. Their singing is accompanied by Rikichi and other villagers motivating them with flutes and drums. The peasants work in unison, absorbed by their task. The three samurai – excluded from the group of villagers – observe the scene from some distance, Kanbei saying: “So, again we are defeated. With their land, the peasants are the winners. Not us.” Kurosawa celebrates his ideal of the samurai as protectors of the weak and as individuals who take responsibility. He also expresses his regret at the loss of this ideal, recalled only by the graves shown in the final shot, which is accompanied by the slow, solemn version of the “Samurai Theme” crescendoing to a last flourish through which resonates the sadness of Kurosawa’s farewell to a culture which has vanished.

One reply on “Self-Isolation Soundtrack: The Music of Seven Samurai”

Yes, thank you for essaying through the music, which keeps me fascinated how come this particular composition for the film? The theme music keeps coming back mostly through the movie with different variations. For sure, to my ears, it sounds as an aspect of the movie to self-immerse one, as the movie is layer of facets next to facets, creating a complex that mathematicians may call it a composite simplex. Thanks. Ali