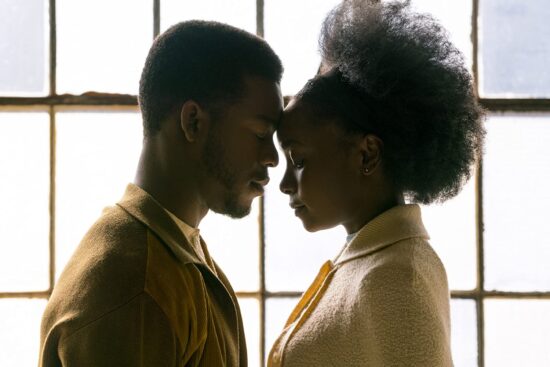 So much of Barry Jenkins’ James Baldwin adaptation If Beale Street Could Talk (2018) looks and feels like Love. All its wonder and joyous trepidation and all its pain and fear. The intensity with which the characters of Tish and Fonny stare at each other, and by design, us, is palpable. The energy pierces the screen and hits us directly in our hearts. That energy is carried to us on the sound waves of Nicholas Britell’s miraculous score. It is music that sounds like Love. I find it a deeply moving, inspiring and propelling piece of music, full of delight and power, built around a series of elegiac and trembling motifs.

Similar to their preceding collaboration on Moonlight (2016) the approach feels akin to Opera, or classic Hollywood musicals, where motifs and suites are built around individual characters and the relationships between them. The music recurs, changed each time based on situation, drama or character changes and hearing the first notes guides the listener to where emphasis is being placed in a scene. For as glorious as Jenkins’ grasp of dialogue is, he’s smart enough to know that for his characters so much has to exist in subtext due to the restrictions on speech, or free speech at least, that are societally placed on those whose stories he is telling. This is where Britell comes in.

Ever since I saw the film the score has been on heavy rotation and it has accompanied many writing stints during lockdown. The track “Mama Gets to Puerto Rico” juts out for me, sounding like a not-so distant cousin to Bernard Herrmann’s final work, Scorsese and Schrader’s Taxi Driver (1976). Britell’s track captures all the anxiety that is on screen, and also in the minds and hearts of the audience, as Regina King travels to try and persuade the victim of a brutal rape to recant her fixed testimony that implicates her son-in-law. It’s a feeling akin to the alienation, hopelessness and barely contained violence that Herrmann’s music gives Scorsese and Schrader’s portrait of Travis Bickle.

The use of cellos is a masterstroke. The vibrations and tensions of trembling vulnerability juxtaposed with stubborn power push the music beyond danger, always towards a Love defiant. A Love that echoes and resonates. The score has become a great comfort and guiding light for me. I can both disappear into it and be powered along by it at the same time, which is exactly the underlying message of Tish and Fonny’s Love. During these times of deep anxiety, it has given me hope and comfort that whatever the world is going to look like on the other side of this trauma, Love will help in some way and be necessary for rebuilding and reimagining.