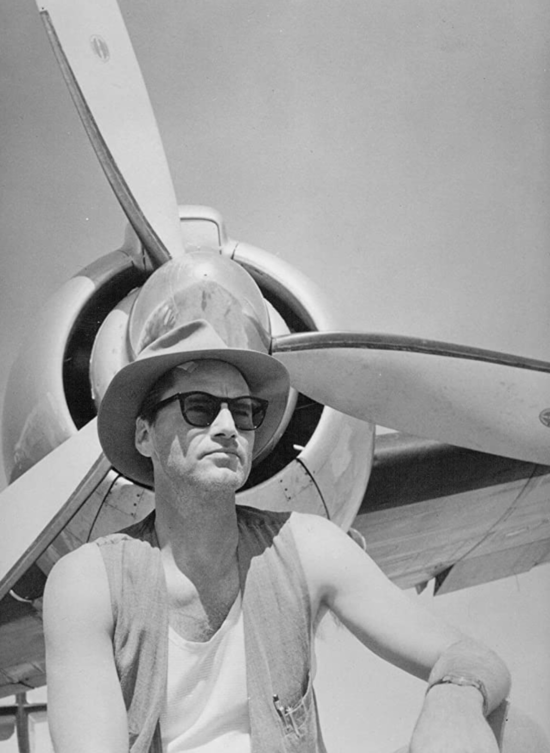 Giorgio Armani’s menswear, and womenswear, aesthetic defined and ruled an era, giving birth to a new form of democracy, a new modernity, a new elegance, by going against the grain and proposing diffused lines, a less severe allure to the male figure, and a less constricted allure to the female figure. It was an aesthetic that photographer Aldo Fallai, who started to work with Armani in the early 1970s, before Armani established his own label, and the designer “developed together step by step, as it came from simply observing what was happening around us”, but not by copying what they saw but by portraying something aspirational, a social class that was missing, “a non-existing Italian bourgeoisie – a sort of Nordic bourgeoisie, an enlightened bourgeoisie. A civilised population. […] I mean, especially when there’s a period of general crisis, we should deliver dreams to people instead of helping to lower their general taste,” the photographer further concludes in this interview. Armani wanted people to live differently through the way they dressed.

It was an aesthetic that went against the formality of the times. Talking about his impoverished childhood in postwar Piacenza and his father in his book, Armani writes: “My father was someone for whom it took very little to look elegant – as people would say back then – whenever he didn’t have to wear a uniform. But I always picture him, even now, in that Fascist uniform” (his father had no choice when he was hired to work at a Fascist local headquarters): “a black jacket made of course wooden cloth, baggy blue grey gabardine trousers, a black tie over a black shirt. How curious: isn’t there something about the description that makes us think of the way people dress today?”

It was an aesthetic that Aldo Fallai noted to have originated in Fellini’s I Vitelloni.

Giorgio Armani has had a long relationship with cinema and he has worked on many films, from American Gigolo and The Comfort of Strangers to The Untouchables. In his fashion designs, he preserved an aesthetic of “elegance and distinction” and the idea that attractiveness should not be too revealing. He made people sexy by dressing, not by undressing them, and the epitome of that was the unstructured jacket.

Aldo Fallai continues: “There was also the narcissistic element of the person wearing the clothes, right? Showing off a bit. If you look closely at the images, the models are almost always looking straight at the camera – this was premeditated. Of course, there were images where they looked to the left or right but in the end we always chose the ones that looked straight at you. That’s the relationship between the image on the poster and the viewer. It looks at you and centralises everything. I remember when the first Armani billboard went up. It was a small, slow, low-intensity revolution of having black-and-white fashion imagery in the streets.”

This narcissistic element, some argue, makes its presence felt in many of the characters Armani dressed for the big screen. Designing for film, as a fashion designer, has had its controversies over time, as it is an ambiguous process of preserving their fashion house look and immersing the designs in the narrative. “Cinema allows me to work with clothes in a way that upholds my vision of style, in that I help to build a character. It’s the kind of operation that, when it really works out well, rewards you in the most satisfying of ways: eternity.” 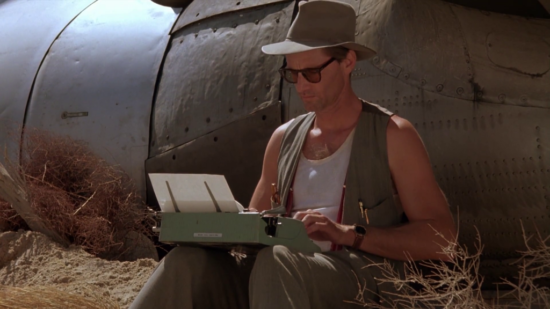 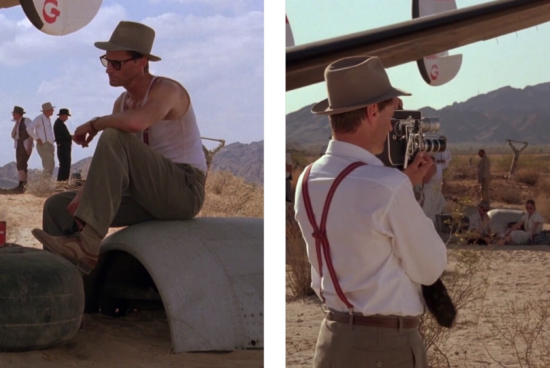 Even when working within the confines of film costume, Armani retains a strong aesthetic identity. That is easy to observe in films such as American Gigolo and The Comfort of Strangers, films set in 1980 and 1990, respectively, thus displaying contemporary Armani designs, but in The Untouchables (released in 1987 but with a story set in the 1920s) or Voyager (original title Homo Faber, from 1991 but set in the 1950s), he had to deal with period reconstruction, and he did it in his own individual way. Films draw on complex codes of authenticity in order to convince and attract their audiences, and Armani knows that. “Film costumes not only relate to the characters who wear them, but also to the audiences who watch them,” writes Sarah Street in Costume and Cinema: Dress Codes in Popular Films. Costume appropriation depends not only on the period of the story, but on the period when the film is released, and, most importantly, on the director’s vision.

“The Magnificent Seven wear Armani,” was the title of an American critic’s piece about The Untouchables when it came out in 1987. Film journalist Lars Penning wrote that that remark “wasn’t far from the truth. The Untouchables is more like a Western than a detective story. In interviews, De Palma repeatedly stressed that the story was really about the young and old revolver heroes.” For sure, whenever a relaxation of the differences between contemporaneity and costume period occurs in film, that is clearly a vision upheld by the director in collaboration with the costume designer or fashion designer. Another example would be New York, New York, where the exaggerated suits and clothing that Armani did were an overnight sensation retail-wise, but they were suits and clothing – about which a friend of mine who studied film recalls vividly from a talk Martin Scorsese gave to her class – that were brilliantly thought out to reflect the heightened emotions of a crumbling marriage. Sometimes liberties are taken to make a film a bit more comprehensible to modern times and that’s something I am always open to, especially if changes are carefully considered and thoughtfully altered from reality and work for the film and for the audience.

“A successful character surpasses the barrier of time; he or she becomes a legendary figure and not just because of the way they act, but because of the way they’re dressed,” Armani said. Cinema is primarily visual, and Giorgio Armani knows that clothes enhance the cinematic experience, recalling to mind that relationship between his billboard posters and his audience he focused on when creating the image of his fashion house. That being said, Armani’s clothes in Voyager (and before that, in The Untouchables) are not necessarily easily identifiable as Armani style, but as a style that easily navigates through the fashions of the 1950s and 1990s, a repertoire of sartorial items of the fifties that are lent a modern sensibility – therein lies their appeal. Stylisation is the key word here. “Giorgio is a perfect stylist, he knows absolutely everything there is to know – where to put the pins, how to place the jackets in the best possible position, how to shape the waistline,” Aldo Fallai resolved. He is a craftsman, too, one who likes to feel the line of his designs from the moment he draws them by hand to the moment when they follow the movement of the body. “People underestimate the importance of drawing in fashion,” the designer says. “But to those who insist that all you need is a computer, I reply that then the essential human factor is missing; the hand that traces the width of a pair of pants or how low a neckline on an evening dress should be.”

“I enjoyed being out of reach.”
-Walter Faber

When I first came across a publicity still from Voyager (image at the top of this article), I didn’t know that Armani had worked on the film. But when I saw Sam Shepard in his tank top, vest, suspenders and Trilby hat, the image instantly reminded me of Giorgio Armani’s 1980s and 1990s campaigns. It also reminded me of this portrait of Armani’s father – in his shirt, tie and vest and with his spectacles on, one of those elegant looks he wore on his days off uniform. It was not just the clothes that brought Armani’s campaign imagery to mind, but the feel of the shot, and Sam Shepard’s body language, and the gaze on his face. It is a detached look.

Walter Faber is an engineer who travels from New York to remote sites in Latin America, and from one corner of Europe to the other – Schlöndorff has acknowledged that the content of Voyager in a way reflected his own personal situation: “Somehow, I sort of have a suitcase existence,” as cited in the book Volker Schlöndorff’s Cinema: Adaptations, Politics, and the “Movie-Appropriate.” Faber’s work has always come first. He is detached from everything, tepid and analytical, a voyager through his own life. Even when the plane he is on is about to crash, he remains composed and unemotional, simply absorbed by the mechanics of the accident rather than by the possible outcome – however, the experience makes him remember that there was a time when even he was in love (“With the eternal dream to settle down with a home,” Schlöndorff concludes of his resemblance to the character). It’s that detachment, the intentional projection of a certain image that I first associated with the Armani aesthetic. More than representing the times and the fashions of the times, it creates a point of identification with the character, to his transient traveller’s existence, while subtly assimilating Armani’s designer identity into the costumes. 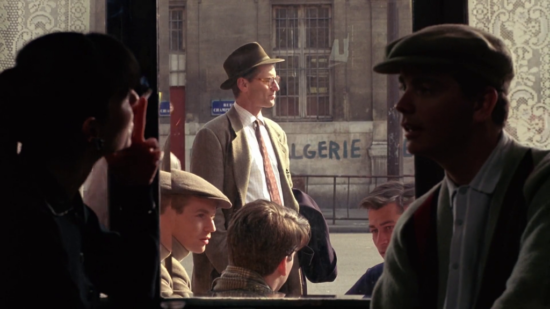 Walter Faber always wears a Trilby hat, even in bed. 1950s accurate? Yes. Functional for that particular scene? No. But it makes sense because it’s a distinctive trait of his character. It is, however, interesting to notice that the hat is clearly meant to be a reflection of the times. He always wears one in the present, which in the film is 1957, but in the flashbacks that show him in the 1930s, he wears a cap, which was much more appropriate for those times. Faber’s pleated, light weight trousers and his loose shirts with big breast pockets also echo the 1950s fashions, but it is a style that also reverberates the fashions of the 1990s – I perfectly remember how my father used to wear those same kinds of clothes in the 1990s.

But the details, the one size too big of the black coat, the way he wears his hat (just so), the gracefully draped and rumpled supple materials, the insouciant nature of that vest over tank top and suspenders, and attitude are undoubtedly Armani bywords. By offsetting the functionality of his clothes with a modern stylishness, a stylishness that confers Faber a universal appeal, Armani “surpasses the barrier of time”. 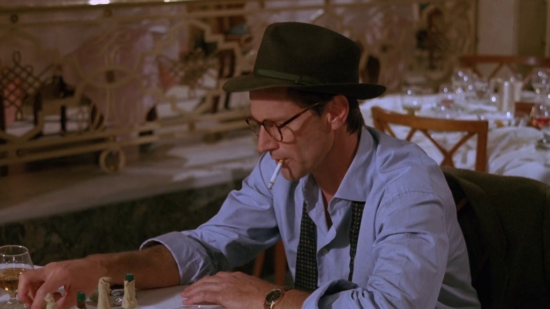