When I first watched The Big Lebowski (1998), I didn’t like it. The viewing took place sometime around 2011, while I was a wet-behind-the-ears film student at the University of Georgia. I can’t tell you exactly why I didn’t like the film, I just felt that it wasn’t for me. I knew beforehand that The Big Lebowski was considered a cult classic and one of the Coen Brothers’ crowning achievements. Yet I found it underwhelming, to say the least. Fast-forward about a year and I’m quoting “The Dude” with hundreds of other fans at Lebowski Fest 2012 in Louisville, Kentucky.

Lebowski Fest began in Louisville in 2002, thanks to cofounders Will Russell and Scott Shuffitt. It started as a small gathering of like-minded “Achievers” (AKA Lebowski fans), but it wasn’t long before the event took off nationwide. Annual Lebowski Fests are now held in over 12 major cities in the United States, as well as one event in London.

Jeff Bridges (i.e. The Dude himself) even attended Lebowski Fest 2014 in Los Angeles. Other stars have also graced the event with their presence at various times. With each passing year, the event and surrounding fandom become more and more mainstream, with new Lebowski Fest locations cropping up all over the place.

Thousands of new Achievers are introduced to Jeffrey Lebowski every year, while experienced Achievers continue to show their love for film. I guess that’s the way the whole durned human comedy keeps perpetuatin’ itself down through the generations.

Becoming a Fan of The Big Lebowski

So, how did I come to be in Louisville for Lebowski Fest 2012? For one reason or another (likely the insistence of my elder brother), I watched the film a second time, then another, and another. With each subsequent viewing, I grew to love everything about The Big Lebowski. Like most “Achievers,” I could quote the film backward and forward. The script felt so perfectly executed, with almost too many great one-liners to choose from.

As my budding interest turned into full-blown fandom, my brother and I decided to drive up to Louisville in the blistering heat of summer for the 10th Annual Lebowski Fest. Despite fancying myself a film connoisseur, I had never attended any kind of movie festival before. However, Lebowski Fest isn’t exactly a movie festival as it is a festival about a movie. The distinction is important.

In any case, we booked our hotel, filled up the tank, and got out on the road. We didn’t really know what to expect. I’m usually not a spur-of-the-moment person, so I was reticent from the start. I don’t like to be out of my element in unfamiliar surroundings. But my brother, never one to say no to a new adventure, convinced me to take her easy and just go with the flow. So, that’s exactly what I did.

My First Impressions of Lebowski Fest 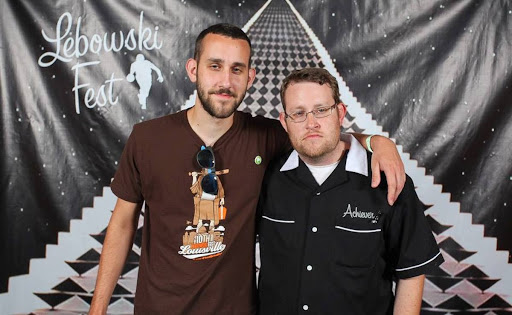 After driving over six hours from Atlanta, Georgia, I was a little disappointed to see the venue. The Executive Strike & Spare is a pretty run-of-the-mill bowling alley. It sits across the street from a few different hotels, where most Achievers lay their heads at night during the Fest. While there was nothing wrong with the bowling alley, it didn’t seem like the kind of thing you would drive six hours to see.

The building is adjacent to a large parking lot, guarded on one side by a dingy, chain-link fence. On the other side of the parking lot lies a grassy area where many of the Fest’s events take place. I saw a tent set up near to a beat-up car that resembled The Dude’s vehicle from the movie. All in all, I was not impressed.

The next day, Lebowski Fest officially began. We slept in (as any self-respecting Achievers would) and moseyed over to the bowling alley to see what it was all about. A few dozen cars were already parked, with some people tailgating. A handful of attendees were dressed as characters from the movie, like The Dude, the Sheriff, Walter, the Stranger, and Jesus — just to name a few.

As the first few hours passed, I couldn’t shake the feeling that I had been duped. There were very few events going on during the afternoon. People just walked around, quoting the movie, sipping on beers, waiting for more people to arrive. I grew agitated, thinking that I had driven so far and dedicated my weekend to something that felt less like an event and more like an impromptu get-together.

However, things changed as day turned into night. More people appeared and we began socializing with some of the other “Achievers.” In a short span of time, we met with people from all walks of life, each with their own unique backstory. The more people we met, the more we came to realize what was so special about the event. It wasn’t about spectacle or appearances — it was about a shared passion for The Big Lebowski and its central protagonist: The Dude. 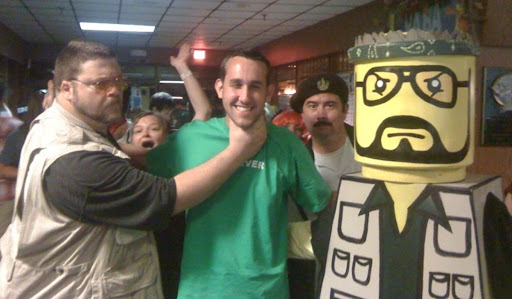 Lebowski Fest is typically a two-day festival, with different events taking place each day (and night). To be completely honest, I couldn’t tell you exactly when everything occurred. The beer and — of course — White Russians were flowing freely. However, at some point in the two-day blur, there were opportunities for Lebowski-themed photo ops, a booth for Lebowski Fest merchandise, an outdoor screening of the film, a bowling competition, a costume contest, and probably dozens of other miniature attractions that I wasn’t even aware of.

Regardless of the event and its organization, it was the people that really brought Lebowski Fest to life. The median age was probably around 40, but you had people of just about all ages attending the event. There were conservatives and liberals and everything in between, though nobody seemed to mind if you smoked a J. Some people traveled from across the country to be there, while others just needed to walk a few blocks to enjoy the festivities.

There were hardcore cosplayers and casual movie fans alike. Many of the people who dressed up really got into their characters, for better or worse. Sometimes, you just wanted to have a normal conversation with someone, only to have them speak entirely in movie quotes. We even had one or two fake sheriffs who took their fake sheriff duties a little too seriously.

As the official home of Lebowski Fest, Louisville also draws a few actors from the film. Most notably, the non-actor actor who played Liam (Jesus’ mustachioed bowling partner), frequently attends the event. As the only person directly involved with the film, Liam (played by James Hoosier), was our own celebrity and a way for everyone to feel even closer to The Big Lebowski.

At just about any moment during the two-day event, you could see and hear every Lebowski reference imaginable. Did someone say something a little risque? Over the line! Was the queue for the bathroom too long? Fuck it, Dude. Let’s go bowling. Had someone raised there voice a little? This aggression will not stand, man!

That’s just the tip of the iceberg. Most of the people who attended the event had seen the film dozens of times and could recognize even the most obscure of references. I remember staring, in a somewhat inebriated stupor, at a woman who appeared to be wearing a fake pile of excrement as a hat. It took me longer than I care to admit to figure it out. Where’s the fucking money, shithead?!

What Makes Lebowski Fest So Special?

I may not have sold you on Lebowski Fest and that’s ok. But Lebowski Fest really is so much more than the sum of its parts. On the surface, it’s a casual get-together in and around a bowling alley. Much like the film itself, I was not sold upon my first viewing of Lebowski Fest. It took time for me to appreciate the true beauty of both the film and the event.

As previously mentioned, for myself and many others, alcohol (and the occasional J) fueled the event. However, most events that involve copious amounts of drinking almost inevitably devolve into chaos and drunken brawls. Fortunately, Lebowski Fest was different.

Everyone who attended the event had a shared love for The Dude. Deep down, we all wanted to be him. It didn’t matter if you were male or female, young or old, some part of you wanted to be like the master of all Zen masters.

Even if it only lasts for 48 hours, Lebowski Fest gives every Achiever the chance to forget about the outside world and just chill for a while. You’re not worried about the rent that’s due on the 10th or your car getting stolen. Because, you know, The Dude abides. 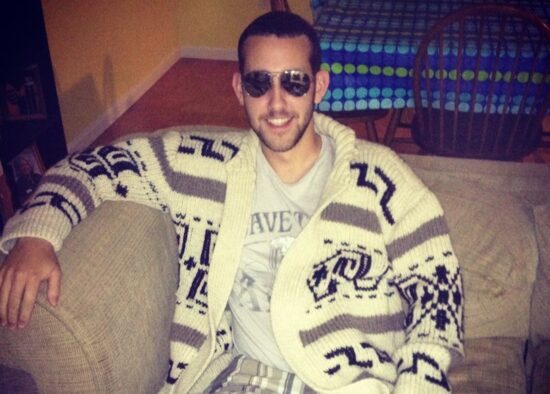 That’s exactly why I would return for Lebowski Fest the following year. I saw many of the same friendly faces and made some new friends along the way. By that time, I had even convinced my mom to knit a Lebowski sweater for me (pictured above). Unfortunately, my life since has kept me away from Lebowski Fest, but it’s comforting to know that there are still thousands of Achievers out there, still takin’ her easy for all us sinners.

As previously stated, I really didn’t like The Big Lebowski when I first saw it; I would come to find out that even some of the most diehard fans felt the same way. It must be something of an acquired taste. The same held true for Lebowski Fest. At first glance, it’s just a bunch of people gathering to drink, chat, bowl, wear costumes, and quote an old Coen Brothers’ movie ad nauseam.

Underneath this humble exterior, Lebowski Fest is so much more. It’s a way for people to get in touch with their inner Dude. As a result, the Fest brings out the best in people. Everyone just wants to kick back and have a good time with like-minded fans. Nobody’s putting on airs. In fact, the more casual you are, the more you fit in with the rest of the bunch.

Matthew Jones is a freelance writer who specializes in blogging and copywriting. After graduating from the University of Georgia with a B.A. in Film and Philosophy, Matthew worked in the Atlanta film industry for over two years. After his tenure in casting, Matthew traveled around the world, writing and teaching English along the way. If you'd like to see more of Matthew's writing, check out his blog at https://philosophyinfilm.com/