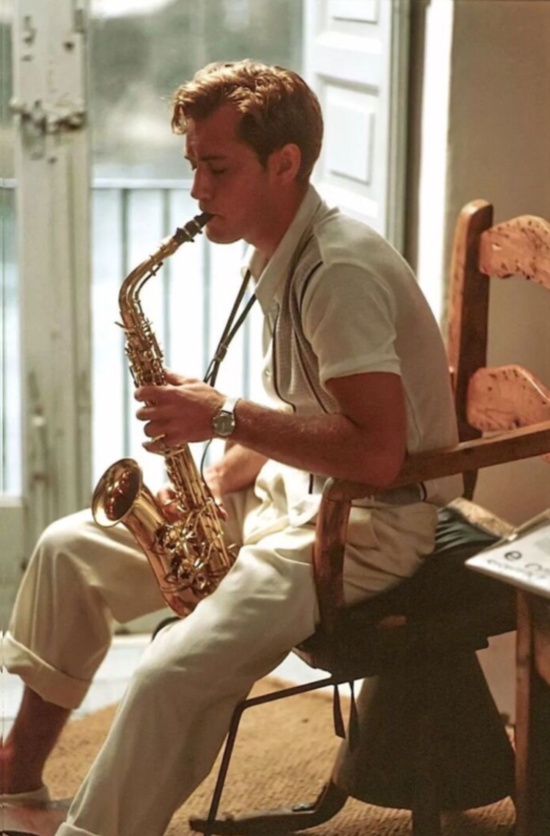 It begins with a Princeton jacket and an innocent identity mix-up. Tom Ripley (Matt Damon), a working class young man, wears one when he fills in for a friend who has had an elbow injury and can’t play the piano at a high class party. The party is given by shipping magnate Herbert Greenleaf and his wife. They see Ripley in the jacket and assume he is a former college colleague of their son’s, Dickie Greenleaf (Jude Law), who has decamped to Italy, living la dolce vita. His father wants him back home, so he offers to pay for Ripley’s trip to Europe and an extra $1,000 if he persuades Dickie to return to his obligations in New York. Ripley agrees and, dressed in a well-worn and ill-fitted corduroy jacket, sets off for Europe.

The Talented Mr. Ripley, directed by Anthony Minghella, is the second adaptation of Patricia Highsmith’s novel by the same name, after René Clément’s 1960 Plein soleil, with Alain Delon as Ripley and Maurice Ronet as Philippe Greenleaf in the leading roles. The beauty of these two films is that they are different and the viewer is rewarded in different ways when watching them. Minghella’s film is a classic in its own right, and by that I mean it is that kind of film that is character-driven, that kind of film that gives you the possibility and means to get to know the characters and see them evolve, that kind of film where photography, lighting, composition, costume, mise-en-scène are carefully considered and employed to the tiniest detail to ensure a complex cinematic experience, that kind of film that will sustain and reward many viewings over time and that will have later generations turn to again and again. That kind of cinema has been almost completely lost in the last few decades. But maybe the greatest achievement of The Talented Mr. Ripley is that, in the true vein of Hitchcock’s movies, it provides equal parts elated pleasure and simmering tension.

Tom Ripley soon meets a sun-soaked, golden-haired, insouciant Dickie Greenleaf, his no less beautiful girlfriend Marge Sherwood (Gwyneth Paltrow), and his lifestyle in the idyllic coastal town of Mongibello, a fictional location in the south of Italy, and deception takes on new proportions, evolving into a disturbing tale of social climbing, as Ripley’s destructive desire to both acquire and assume the character of Dickie quickly becomes apparent. It isn’t hard to aspire to being Dickie Greenleaf and to his life of Italian leisure. Jude Law’s charismatic Dickie is confident and cool and so comfortable with the good life. Tom Ripley is not, and the only way he sees to create his own identity is to steal Dickie’s – completely outshining the weak and maladjusted and poorly dressed Tom, who looks and feels so out of place in his square glasses, chinos, knitted ties, oversized button-down shirts and the ever-made-fun-of corduroy jacket – an Ivy League look, supposedly a paragon of neatness, gone wrong. 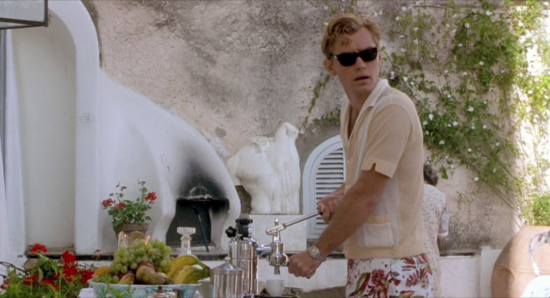 It was the 1950s, and, as Gary Jones, who teamed up with Ann Roth as costume designers, said in an interview, “it’s really difficult sometimes for us to realize how innocent times were then – the clothes weren’t showy. There was no sexual innuendo – all that came later, in the ’60s.” Indeed, the sixties would be a time when a postwar Italy revelled in a consumer boom driven by film, music, fashion and scooters as the vehicle of choice, an Italy that was “the culture of la bella figura, a belief that appearances, comportment and graciousness are overwhelmingly significant in the well-managed life,” as it is described in the book La Dolce Vita: The Golden Age of Italian Style and Celebrity, by Stephen Bailey, and American actors and socialites, or their privileged children, travelling to Italy were undeterred in embracing the glamorous and decadent life. They brought along the fashions and music and rebelliousness and met with a European sensibility and their own radical demographic shift.

Dickie’s wardrobe does have a rebellious element to it. Things had started to change in the mid-50s, when the action is set (a change that Federico Fellini was already able to capture in 1960, in his La dolce vita), on both sides of the Atlantic, the new youth culture movements led by the Beat Generation were taking over, mingling styles, tastes and world views, dropping out of society and rejecting traditional touchstones. Dickie’s clothes are a reflection of his self-confidence and his leisurely and luxurious lifestyle, and his whole way of frivolous living is a form of distancing himself from the previous generation, his parents, especially his father. Summers by the sea, skiing holidays in Cortina d’Ampezzo, jazz clubs in Rome – “Jazz is just insolent noise,” is how his father dismisses Dickie’s tastes in music. Dolce far niente. He makes friends easily and discards them even more easily. He makes plans and then ditches them when something better comes along. He plays the sax, but he may become bored with it and take up the drums. Few things last in Dickie’s life. But his clothes are a mainstay.

He wears beautifully made clothes, adopting the Italian sartorial ways with nonchalant vitality. Italian knits with just the right amount of buttons undone, rolled up white linen trousers, deconstructed linen blazers, colourful patterned shorts, and loafers or plimsolls: the finest quality summer wardrobe. They are made to look like they were tailored to perfection in Italy, which they were in the film – Dickie tells Tom his suits are made at a sartoria in Rome – “Let me get you a new jacket. When we get to Rome, there’s a great place, Batistone.” In reality, the clothes were made by John Tudor, a bespoke tailor in New York. “My job was to show this very well-off boy, Dickie, in Europe, on a very strict allowance, but with a sensational lifestyle,” said Ann Roth. “I had him in a jacket and some shorts, or a jacket and some linen trousers, and that jacket had to reflect a very rich background. And if he had one or two made in Rome, it had to look that way.”

By contrast, Tom’s clothes were all vintage pieces remade by tailors in NY and Italy, after an assiduous research work in magazines, photographs, into the fabrics and garments of the time, so that they didn’t fit the character. The clothes he wears later on, when he “becomes” Dickie, were bespoke. “Just wear some of my clothes. Wear anything you want. Most of it is ancient,” Dickie tells Tom. It is just what Tom wants and this preoccupation of his is obvious in the scene in the train when Tom juxtaposes his reflection in the window with Dickie’s, which I find even more creepy and disturbing than the scene in front of the mirror when Tom is impersonating Dickie, dressed in his clothes, unknowingly being watched, because it is the former sequence that alludes to the fact that Tom does not just want to look like Dickie, he wants to be him.

But it’s the clothes nonetheless that prove most efficient to Tom to smudge the lines between appearance and personality, because it is through clothes, the supposedly superficial attributes of one’s self, that one character can pass for another so easily and that also can make himself recognize the other in himself. But there is more to Dickie’s beautiful clothes than superficial outward looks. They are more than a privilege of his social class. Yes, he pays attention to clothes and he buys them well. Yes, looks are important to him – “Without the glasses, you’re not even ugly. I don’t need them. Because I don’t read,” he casually confesses to Tom. But his clothes are not brand new. Actually, they appeal so much precisely because he doesn’t flaunt his dressing style, his clothes are not just for appearance, they seem to have a story, and his style is consistent and authentic, and it has to do with individuality just as much as it has to do with necessity. He is happy with his life in pursuit of pleasure, living on his allowance. But it is a strict allowance nonetheless, so he chooses his clothes well to serve him long, and makes them his own. Actually, his wardrobe is surely made up of things he already had from New York and some new stuff he has purchased in Italy, which would best explain his flamboyant style, with a penchant for hats and rings and an overall look inspired by the New York jazz scene of the 1950s just as much as it is by the easy Italian elegance. He can not completely shun his past, but he makes the best of the present. And maybe that’s the most enviable thing about Dickie Greenleaf.