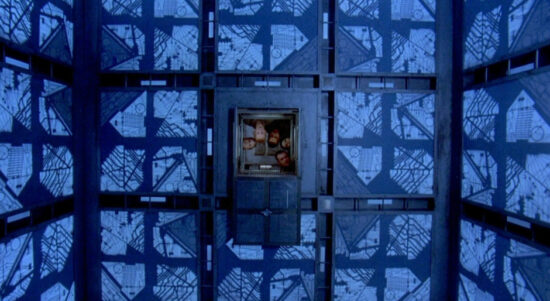 Weaving horror techniques with philosophical undertones, Cube (1997) navigates the dark recesses of humanity in a mechanical enigma. In a bright start for his career, Vincenzo Natali co-wrote and directed the movie while still a student in film school. It is perhaps due to this creative freedom – and a low budget – that a most chilling premise was born in the simplest set.

The entire set for the movie was a 14 by 14 feet cube that changes into five different colors, to give the illusion of five different rooms. A separate cube was built for the shot of looking into one room from another. Despite this direct construction, the film abounds in psychological and physical terror.

Two men wake up in a cubic room without any memory of being sent here. They are soon joined by three other people from the adjacent rooms. Everyone has his or her own speculations on the purpose of the cube. Led by the police officer Quentin (Maurice Dean Wint), the group traverses the mechanism of the structure, conscious of fatal traps in some of the rooms. Informed by Leaven (Nicole de Boer), a mathematics student, the team has some success avoiding the rooms with traps. Yet, as further features of the cube are revealed and the exit is at hand, the visceral vices of the characters become apparent. 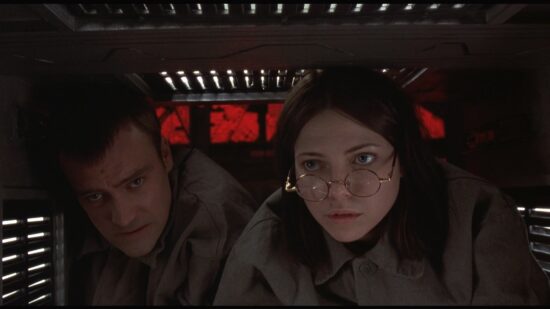 Like many of his later films, Natali’s Cube examines humanity in the most abstract technological circumstances. Cube is a film that grapples with compassion and purpose in the direst circumstances. In some sense, it is a more extreme form of reality. Worth (David Hewlett), the silent follower of the group, describes the cube thusly: “It’s a headless blunder operating under the illusion of a masterplan. Can you grasp that? Big brother is not watching you.”

And an existential despair follows, as the others react differently under the seeming pointlessness of their struggles for freedom. It is also the film’s invitation for the audience to reflect on the philosophical significance of the cube. Because like the disorganized chaos of the world, it reflects how easily lives are changed by circumstances.

As a side note, the disruption of routine by the pandemic is very much like the shock the characters felt upon waking up inside the cube. The “Twilight Zone” scenario and existential intrigue will keep generations of viewers coming back to Cube, wondering what lies beyond those walls or behind the façades of those faces.