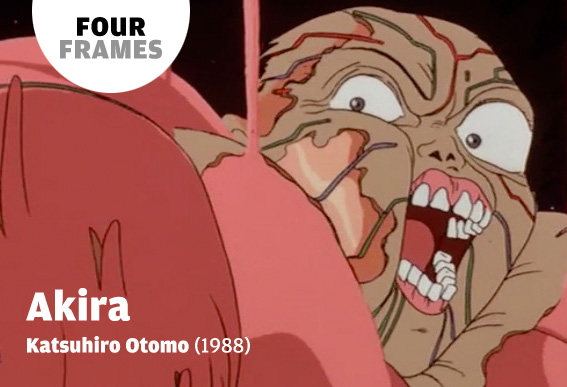 A cautionary metaphor for the dangers of unchecked power, or just a slice of Japanimation at its most ass-kickingly spectacular? Whichever way you look at it, the influence of Akira, the 1988 anime cult favourite, endures persistently. A nightmarish sci-fi yarn of motorcycle gangs and child psychics, of terrorists and telekinesis, amidst an imposing post-apocalyptic ‘Neo-Tokyo’, it concludes in appropriately fanciful fashion with a memorable sequence that would inspire animators for years to come.

Working from an $11million budget (unheard of in anime at the time), the production was almost quixotically ambitious, and this climactic final scene is perhaps the appropriate culmination of that ambition. Following battles between government forces and dissidents in Neo-Tokyo’s neon-lit backwaters,  teenage gang member turned unhinged psychic Tetsuo loses control of his powers and starts mutating into a gigantic sprawling monster.

Perhaps affected by the proximity of omnipotent psychic Akira (by now confined to a few test tubes buried under the Olympic stadium), Tetsuo’s transformation is fast and brutal. Within seconds, the unassuming 17-year-old becomes an immense, grotesque beast, limbs sprouting from limbs, enough to make John Carpenter’s Thing blush. Tetsuo’s former friend and fellow gang member Kaneda can only watch on in horror.