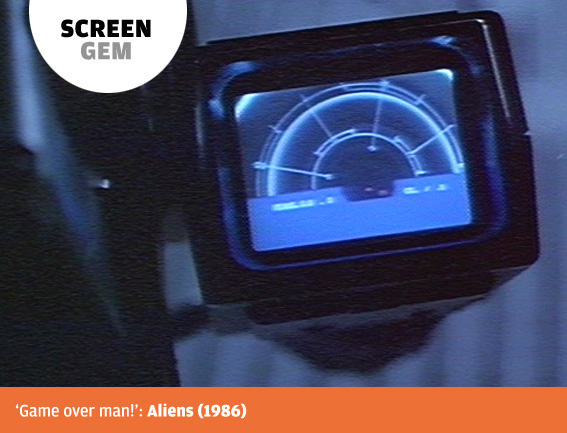 Directors often rely on composers to provide key signature passages in their film scores to aid the audience’s journey through a narrative – think John Williams’ iconic themes for Indiana Jones or Superman ­- but objects, and the sounds they make, can often become just as effective in helping to support character recognition, thematic progression and emotional manipulation. Some become so iconic that they transcend the source material to become ensconced in the everyday popular consciousness, such as Star Wars‘ thrumming lightsaber or Darth Vader’s asthmatic breathing device.

Sound, and the occasional lack of it, has always been a vital part of the Alien film franchise. From the onboard computers flickering to life and gentle glide of the incubator-like hyper-sleep pods to the industrial clatter of each film’s vast array of machinery and weaponry, sound design is repeatedly used to reinforce a mood of heightened suspense and anticipation. Chest bursting scenes aside, the first Alien film has often been described as a haunted house movie set in space, Ridley Scott using the slow and steady approach to ratchet up degrees of tension to almost unbearable levels before each subsequent crew member meets their grisly demise. But whereas Alien‘s absence of sound works so well to quicken the audience’s pulse-rate, James Cameron would use the heartbeat itself (or a version thereof) as a primary fear inducing device in his testosterone fuelled 1986 follow up, Aliens.

The handheld motion tracker used by Sergeant Apone’s gung-ho band of space marines to detect, first human, then alien movement during their ill-fated rescue mission on planet LV-426 is an essential bit of kit, and one which acts as a pivot in key scenes throughout the film. The sonic pulse emitted by the machine closely resembles that of a heartbeat, and was a masterstroke on the part of the sound designers who use it simply to manifest audience anxiety. Comparable to John William’s minimalist piano theme used to alert us to the shark’s ominous presence in Jaws, the motion tracker in Aliens gradually becomes a pulsating omen of bad things to come – either when craftily toying with our expectations in a number of false set-ups or when all hell’s about to break loose.

Aliens, aside from being a cracking combat romp, is also a film about searching; the rescue team searching for survivors, Ripley searching for a surrogate daughter, Bishop searching for human approval – so it’s fitting for a tracking device to become more indispensable as the crew’s impressive arsenal of weaponry becomes increasingly ineffectual against an army of slavering space beasties. True, Ripley needed a flame thrower, pulse rifle and hulking loader to ensure her and Newt’s final escape, but it will be the motion tracker’s thrumming heartbeat that leaves the most lasting impression.