Scorsese fans will be quick to notice that very same thrilling cycle of isolation, rage and climax recurring throughout his oeuvre: Mean Streets (1973), Raging Bull (1980) and Goodfellas (1990) all finish with a great big, satisfyingly conclusive bang. Not so with The King of Comedy (1982), though, Scorsese’s vastly underrated, most vicious work, which follows a borderline psychotic who stalks and kidnaps his idol, talk show host Jerry Langford (played by Jerry Lewis) in a bid to get his own stand up routine aired on TV.

Travis Bickle asking his own reflection “…you talkin’ to me?” is desperately lonely, but there’s none so chilling as Rupert Pupkin (Robert de Niro) practicing his comedy routine alone in his mother’s basement. His mom screeching at him to ‘lower it’ might squeeze an uneasy laugh from you. So too might the scene of his showbiz wedding fantasy, but it’s Rupert practicing his stand up act in front of a ‘laughing audience’ wallpaper that really wipes the smile off your face. Arms opened wide to the wall, his routine is drowned out by canned laughter as the camera pans out down an empty white room. 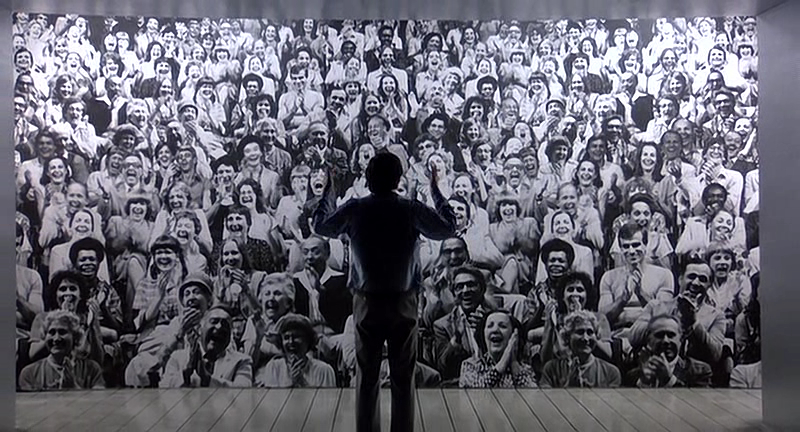 Is the idea of an overenthusiastic fan turning up at a celebrity’s house unannounced, or even kidnapping their idol for a while, so shocking these days? Hardly. Not when we hear how some woman broke her own leg to look more like Jessie J, or how this guy spent $100,000 to look like Justin Bieber. Obsequious slavering over two-bit celebrities seems to have reached an all-time high, and to watch Scorsese’s film now is to see it as all the more prophetic, all the more depressing.

The King of Comedy is bitterly funny, but there’s no final punch line. Pupkin’s stand up routine as we finally see it in the film’s final act isn’t a glorious performance, or even awful – it’s just OK; the police and cafe patrons are unsatisfyingly indifferent as Rupert is escorted out. It’s an infuriatingly empty end to a story full of loneliness and frustration. It’s a bitter ‘fuck you’ before the bow and curtain call.