Ferris Bueller’s Day Off may have as its star the titular character who’s laissez-faire attitude to bunking off makes for an entertaining thrill ride, but the beating heart of the film belongs to Ferris’ long suffering best friend Cameron. A neurotic, self-loathing pessimist who only seems to come alive when telling Ferris what a goof he is – Cameron is beset by the kind of angst that will forever keep him on the margins, outwardly reviling the popular ‘set’ for their meaningless frivolity while secretly envying their effortless transition through life.

Cameron is Super-ego to Ferris’ Id, the two needing and feeding off each other but constantly coming into conflict over the appropriate and desirable way to live. Ferris’ insatiable desire to seize the day is what keeps fear at arm’s length, while fear is what keeps Cameron rooted to the spot.

“Ferris can handle everything, I can’t handle anything” Cameron says while his errant friend woos half of Chicago singing Wayne Newton’s ‘Danke Schoen’ on a parade float. His envy of Ferris is only eclipsed by the hate he has for his parents, who prioritise material possessions over human emotion, leaving him a mess of insecurities that result in illness and rock bottom self esteem.

One such material possession features heavily in the film and symbolises two very different things to Cameron and Ferris.

The 1961 Ferrari 250 GT California which Cameron’s father ‘loves more than life itself’ – and which will fatefully lead to a long overdue ‘chat’ between father and son at the end of the film – is symbol of freedom and desire on the one hand and object of family dysfunction on the other.

While Ferris sees the car as a fitting match to his ostentatious character (and a pretty cool way of impressing his girlfriend Sloane), Cameron sees it as the root of his misery; a prized possession that will forever highlight Cameron’s inadequacies to his father and will always receive the attention he so desperately craves. The immaculately tended car, housed in a modernist glass box, is in stark contrast to Cameron’s infirmary-like bedroom seen at the start of the film, all doom-and-gloom lighting and deathly mood music. 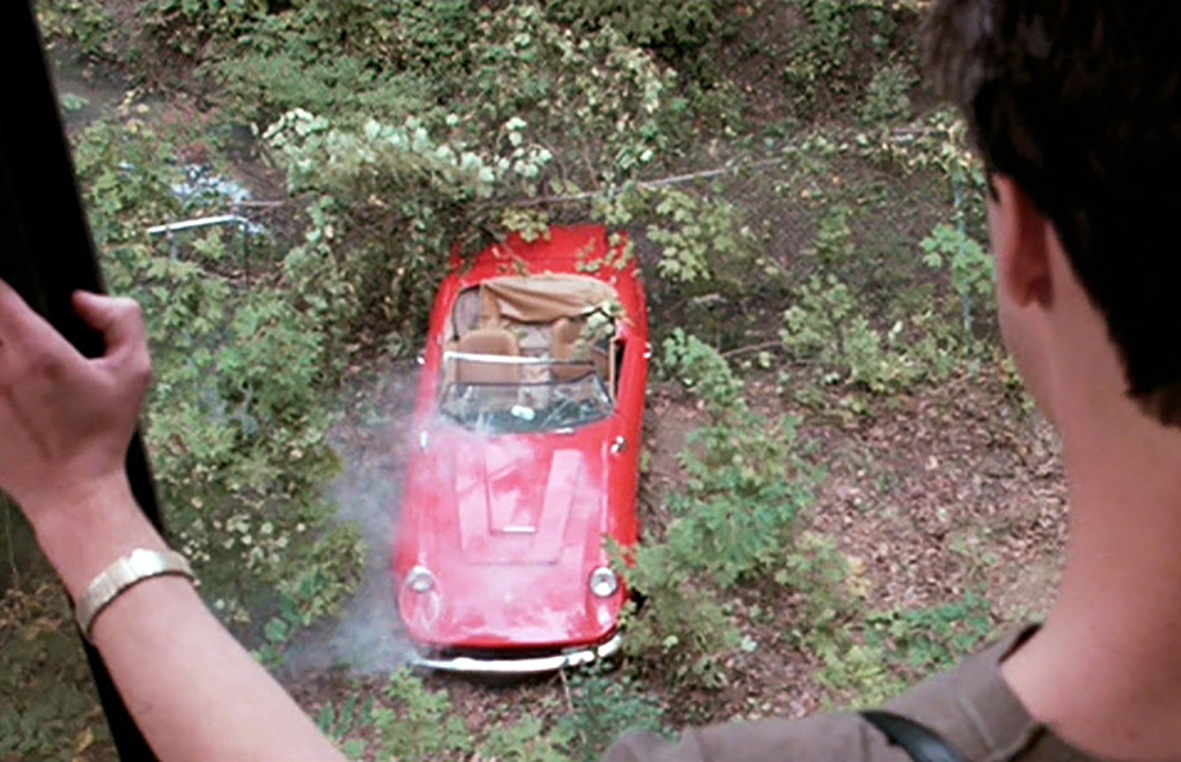 We never see Cameron’s father, but his presence looms ominously throughout the film, and each minute the car is out of its glass box is another minute for Cameron’s stress levels to hit the roof.

When the day’s shenanigans are at an end and the car makes its fateful descent into the abyss below courtesy of a few well-placed kicks on Cameron’s behalf, we know that things are set to change.

The ‘death’ of the car breathes new life into a kid who’s ready to take the heat for it, and may finally result in a real interaction between father and son.

Either that or he was grounded for life.