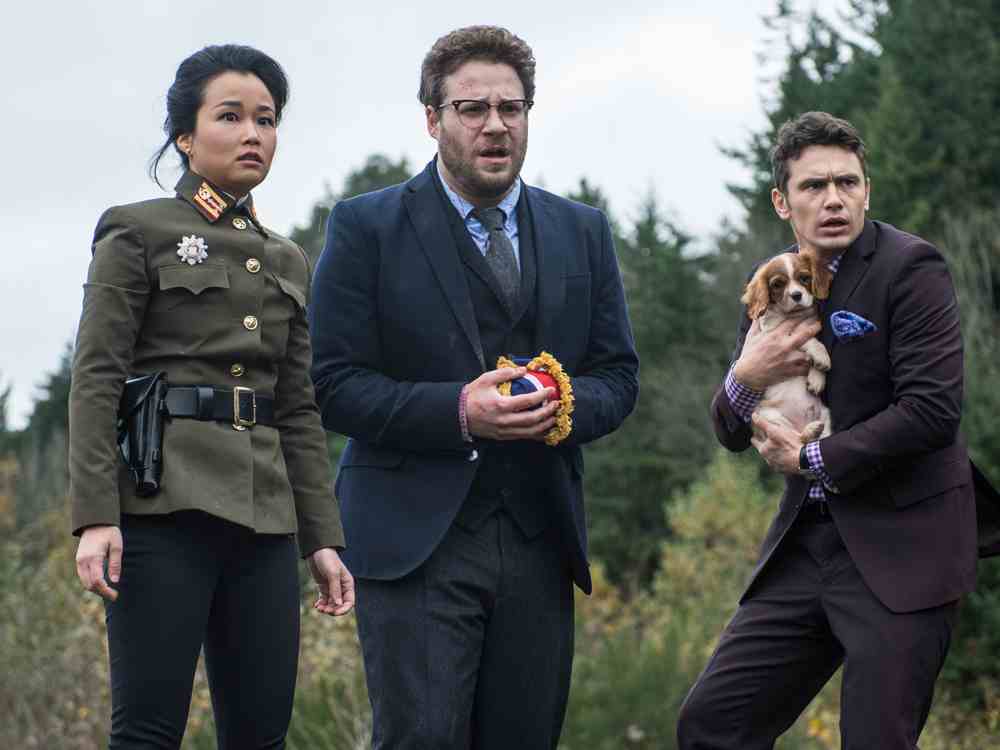 Anyone following the saga that is Sony’s fumbling late 2014 release of The Interview may have thought they were watching a follow up to Barry Levinson’s underrated 1997 satire Wag The Dog. The great movie satires have many commonalities and among them is the discomfort that comes from a story that seems at once utterly preposterous and dangerously plausible. A good satire is a reminder that, however idiotic or terrifying the events on screen, they can never top the surreal horror of real events. 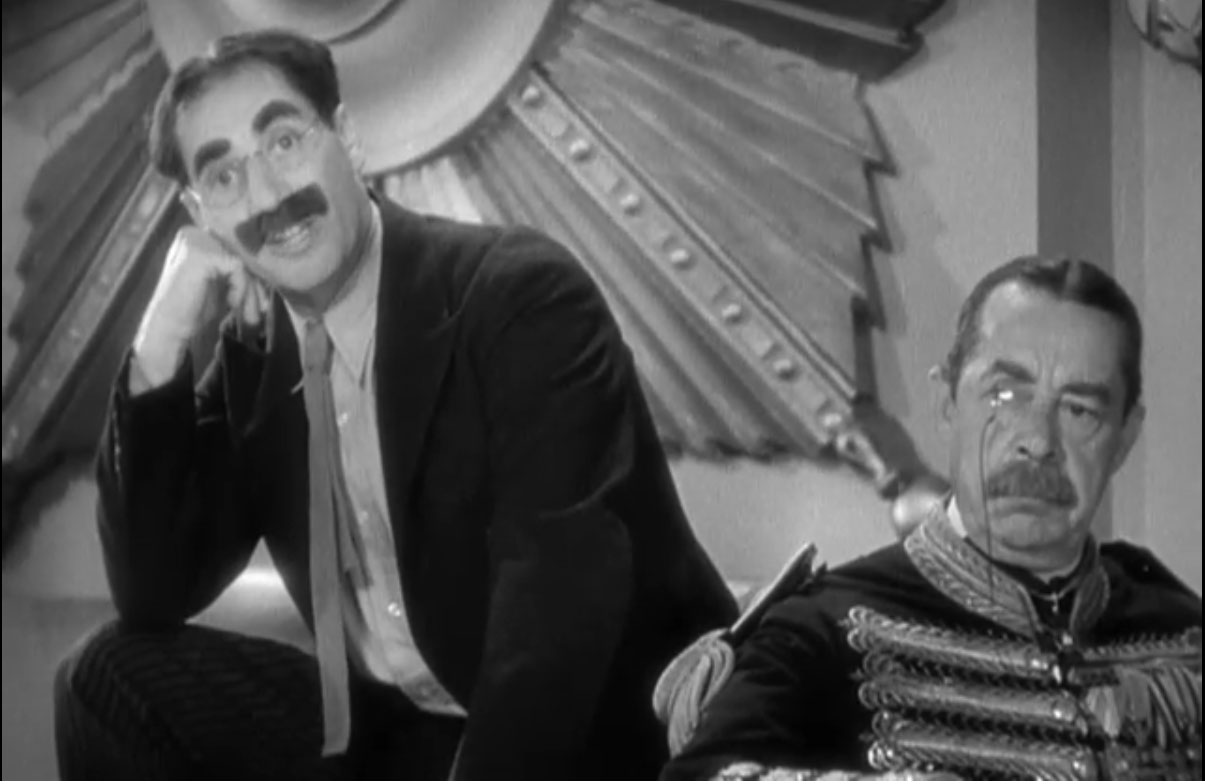 The upcoming Marx Brothers season at the BFI will see extended light shone on Duck Soup (1933), a masterpiece renowned for its razor tongue and moments of surreal visual magic, particularly the famous mirror scene. However, it is also a smart satire that nails some of the fundamental truths surrounding the relationship between those in power and those with the money to control those with said ‘power’. Margaret Dumont’s widowed aristocrat persuades Freedonia to employ Groucho’s Rufus T. Firefly as Head of State only for chaos to naturally ensue. Aside from the chaos however, the film is superbly incisive regarding the role of capitalism in politics, particularly the funding of governments by old money, pressuring politicians into making decisions that benefit the puppeteers. The themes of the film play as strongly as the direct slapstick and sharp dialogue interplay between the brothers. The film also captures the paranoia and subsequent presumptuous egotism of nations and those at their helm. This presumption has become the cornerstone of the global nuclear defence argument.

One of the most memorable elements of Duck Soup is the lasciviousness of the Brothers as they abuse their stations, in particular Groucho and Harpo. The role of sex in movie satires is prominent, sitting side by side with themes of male ego and entitlement. Sex is often the cipher through which these themes are played for comic effect. Early on in Stanley Kubrick’s sublime cold war satire Dr. Strangelove (1964), George C. Scott’s General Turgidson tries to avoid responding to the pretty serious global nuclear situation so he can continue relations with his secretary. There’s a beautiful callback further into the film when Miss Scott interrupts important business in the war room, reducing ‘Buck’ to a quivering, whispering teenage boy. 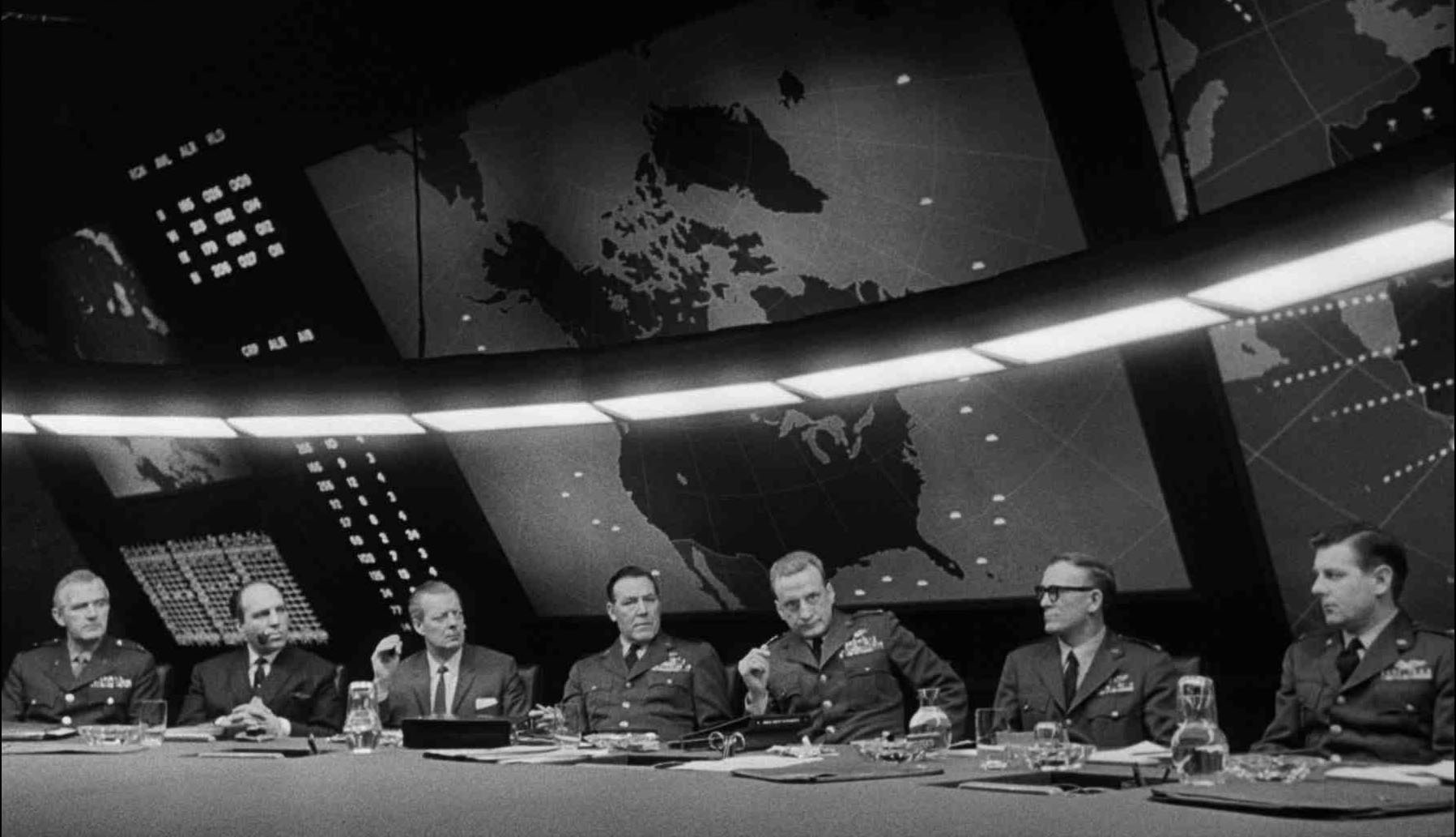 The suggestion, taking Duck Soup as a starting point, that movie satires are saturated with sex and paranoia is given greater credence when Dr. Strangelove is added to the discussion. The film is one of the ultimate films about paranoia, exemplified by Scott’s hyper-deranged General itching to take on the Russians and the slowly deranged, fluoridation conspiracy-fearing General Ripper (Sterling Hayden) who sets the whole catastrophe in motion. The shifting influence of the military in the political debate makes them show the only hand they can play – world annihilation. Peter Sellers’ expression when Turgidson informs him what Ripper has done is a masterclass in simultaneous fear and helplessness.

Paranoia is not at the forefront of Robert Altman’s M*A*S*H (1970) but sex certainly is. The film arrived at the height of the Vietnam War debacle and, though set at an army hospital just behind the frontline during the Korean War, it’s clearly a comment on events concurrent with the film’s release. However, it’s also a deeper satire on war in general, particularly ‘commercial’ wars, and the behaviour of those in the military. It captures the cacophony of conflict, the sexism and salaciousness of unabated male ego and deftly undercuts religious ideology when married to a military one. It’s a film about how to survive war and the answers seem to be – delegate to those lower in rank, have sex, play golf, and do your job, but for goodness sake don’t take it at all seriously. 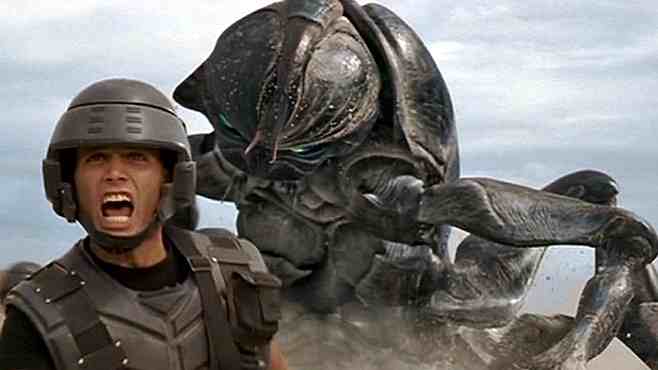 Much like M*A*S*H, Paul Verhoeven’s lurid sci-fi schlock-fest Starship Troopers (1997) is a shrewd commentary on military behaviour with much to say about who actually does the fighting. Unlike M*A*S*H, the film deals directly with conflict as humanity takes on a race of huge insects. The military hierarchy is as clear as the message that exterminating bugs is ‘your duty, your destiny’. Paranoia here is present indirectly through its direct absence. The way Verhoeven weaves propaganda throughout is a comment on the way the media manipulates emotion and controls (mis)information, presenting its and the state’s ideology as news. If the paranoia angle is subtle, little else about the film is. Sex is again front and centre, and of the films discussed, the sense of male entitlement and rampant libido is on its most vehement display here. Whereas the other films discussed use comedy to diffuse the thematic tension they are seeking to play around with, here it is ultra-violence and the propaganda that drives it, alongside defiantly archetypal characters, that is used to hammer home the underlying message of the horrors, manipulations and futilities of war.

What Starship Troopers has in common with the other examples is brashness, a confidence in stupidity that is ultimately exhilarating and terrifying. British cinematic satire, particularly contemporarily, takes a different tack with the likes of Armando Iannucci’s In The Loop (2009) and Chris Morris’s Four Lions (2010) choosing to focus on clumsiness and the very British trait of avoiding embarrassment by continuing a lie or a mistake instead of coming clean and admitting that you may be out of your depth. 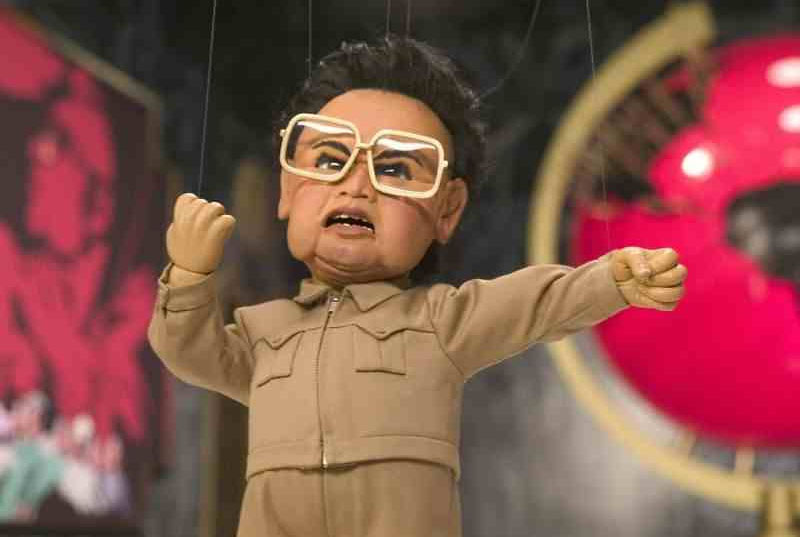 Seth Rogen and Evan Goldberg’s The Interview is not satire, but the release of the film plays like real life satire. There is an existing satire focusing on North Korea – Trey Parker and Matt Stone’s merciless Team America: World Police (2004), which succeeds alongside the most potent satires, including those mentioned here, by ensuring that no side is left deconstructed. Team America has in its sights North Korea and states of its ilk, America and similar supposedly democratic Western superpowers, celebrity activists, celebrities and activists. The best film satires remind us that on all sides of the fight, in all seats of power and influence, it’s mostly just idiots.