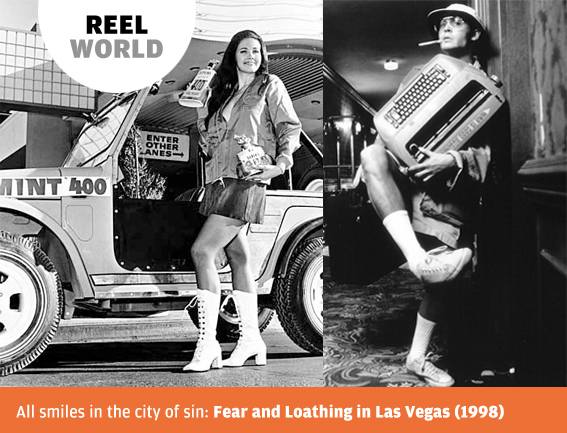 Terry Gilliam’s adaptation of the late Hunter S. Thompson’s ‘unfilmable’ novel Fear and Loathing in Las Vegas is a suitably deranged vision of the 1971 gonzo classic. Originating from two separate assignments, one for Rolling Stone focusing on a narcotics and dangerous drugs convention and the other for Sports Illustrated to cover the legendary Mint 400 off-road race, Thompson largely abandoned the remit and supplied 25,000 LSD and mescalin fueled words that tore at the heart of the American dream. Traveling with the equally debauched lawyer Oscar Acosta, the drug buddies became Raoul Duke and Dr Gonzo in print and were played with enthusiastic relish by Johnny Depp and Benicio Del Toro respectively in the movie. Their lurid, chaotic and often nauseous experiences were captured in thrillingly skewed fashion by Gilliam whilst retaining much of the satirical power of Thompson’s source material.

Whilst their manic escapades during the convention feature prominently in Fear and Loathing the race garners only a brief mention, but the Mint 400 is intrinsic to understanding the overblown, decadent, and celebrity tinged culture Thompson’s writing so often dealt with. In the late sixties Norm Johnson – P.R. Director for Vegas’ Del Webb Mint Hotel & Casino- organised an off road race that grew over the next two decades to capture the imagination of champion drivers, race fans and stars from the entertainment industry. Open to motorcycles, cars, buggies and trucks, and with a prize pot eventually reaching $100,000, the race’s famous entrants included comedian Mort Sahl, James Garner and fully fledged race enthusiast Steve McQueen. With a yearly team of ‘Mint 400 girls’, including one Lynda Carter of Wonder Woman fame, the race in it’s heyday attracted crowds of up to 100,000; drawn by the heady combination of automotive power, celebrity glamour, big money prizes and of course Las Vegas itself. Throw Hunter S. Thompson into the mix and the result was always going to be uniquely unpredictable.