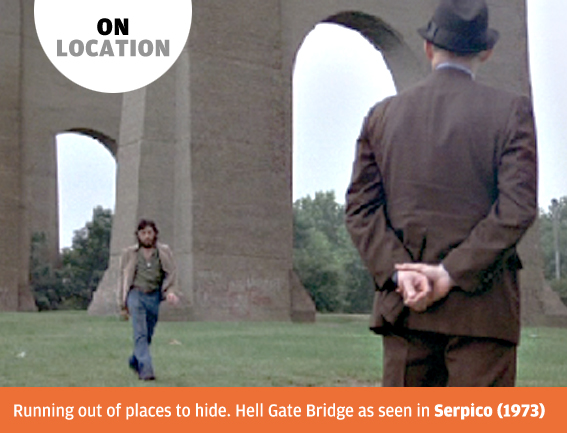 Continuing our tie-in series of articles to celebrate the launch of the World Film Locations book series in July – and as a tribute to director Sidney Lumet who sadly passed away on April 8th – we look at how New York’s Hell Gate Bridge (which connects Queens, the Bronx and Manhattan), provided the perfect imposing backdrop in a crucial scene from Lumet’s masterful 1970s biopic Serpico.

Frank Serpico (Al Pacino) is the counter-culture oddball of the NYPD. His ideals earn him the disdain and jokes of the force. But ridicule is a petty thing. It’s the corruption Serpico can’t ignore. Every precinct is loaded with shakedowns and payoffs. He refuses to participate, and constantly has his arm twisted by every cop he works with. He tries to report it, but his complaints vanish under platitudes and promises. In desperation, Serpico threatens to go to the press. He meets Captain Inspector McClain (Biff McGuire) under Hell Gate Bridge, presumably the safest location Serpico can think of. No ears. No eyes. Just grass, trees and the pillars of the bridge.

It’s one of the only expansive scenes in a claustrophobic movie. Throughout the film, Serpico is constantly filmed in dim hallways, tight streets and dark cars. It emphasizes the scrutiny on him and the increasing terror and pressure to conform. It’s a delicious and ugly irony that when the line is inexorably drawn between Serpico and the NYPD it occurs in the one shot in which we can truly breathe. Perhaps that’s the idea. Serpico knows his dangerous intentions are now out in the open. So do they. As he screams in anger, the camera pulls back, making him a tiny and pitiable figure on the ample landscape, and emphasizes his isolation. His pleas fall on the deaf ears of McClain and Hell Gate Bridge, and the film plunges back into narrow and sweaty gloom.