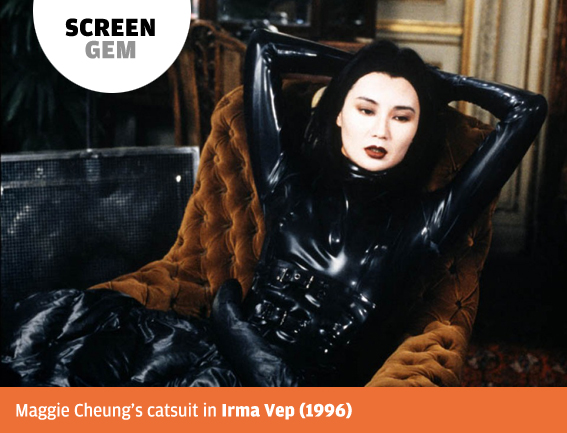 In the French film industry satire Irma Vep, the Hong Kong actress Maggie Cheung plays herself, an Asian movie star who has arrived in Paris to star in a remake of Louis Feuillade’s classic silent film serial Les Vampires (1915) as eccentric director Rene Vidal (Jean-Pierre Léaud) believes that no France actress can match the performance in the original serial. Therefore, he has cast the agile and exotic Cheung, much to the chagrin of others involved in the production, even though she cannot speak a word of French.

The set is chaotic, with Cheung making few friends, although she does attract the attentions of lesbian costume designer Zoe (Nathalie Richard). Although the star is eager to please, her efforts are lost in translation as she struggles to ingratiate herself with the ramshackle French crew and admits to being unable to understand the character of Irma Vep, a criminal who carries out her heists whilst clad in a skin-tight black leather catsuit. The director does not quite have the budget to match his vision for his version of Les Vampires, so Cheung is fitted for her costume at an S&M store.

Seeking guidance from her director, Cheung asks why he has chosen her for the role of Irma Vep; he shows her a scene from her Hong Kong action hit Heroic Trio (1993) and insists, ‘You are mysterious like Irma Vep, you are beautiful like Irma Vep, and also you are magic like her’, only for Cheung to admit, ‘That’s not me, that’s a stunt person.’ Eventually, the actress discovers her character through what could be described as an extreme exercise in ‘method’ acting; while alone in her hotel room, Cheung pulls on the catsuit and poses in front of the mirror, as if she is trying on a new identity. She then leaves her room and prowls the corridors of the hotel in costume, sneaking into an open room where the guest is in the bedroom, arguing with her lover over the telephone. Cheung slips unnoticed into the bathroom and absconds with a piece of expensive jewellery, then escapes to the rain-swept roof where she throws the jewellery away. The value of the stolen item is meaningless to an international movie star, but the creative freedom offered by the catsuit is immeasurable.

Irma Vep was written and directed by Olivier Assayas, who previously contributed to Cahiers du cinema and was particularly critical of the then-shambolic state of the French film industry. As such, the catsuit worn by Maggie Cheung is significant on several levels. Firstly, it enables the actress to shake off the insecurities caused by working in a foreign country and to behave in the stealthily sexy manner that is expected of a 1990s incarnation of Irma Vep. Secondly, it is an image that makes direct reference to an earlier era of French cinema that allowed high art and sheer entertainment to unashamedly meet, without fear of criticism from the cultural elite. When a journalist – who is obviously a thinly-veiled substitute for Assayas – visits the set of the Les Vampires remake, he describes French filmmaking as, ‘a boring cinema, only for the intellectuals and the elite…Friends giving money to friends to make films that nobody sees.’ Irma Vep closes with film-within-a-film footage of Cheung leaping around a Paris rooftop in ‘character’, a fleeting glimpse of an ambitious project that remains unrealised because its backers cannot accept the iconic Irma Vep costume being worn by an Asian star.