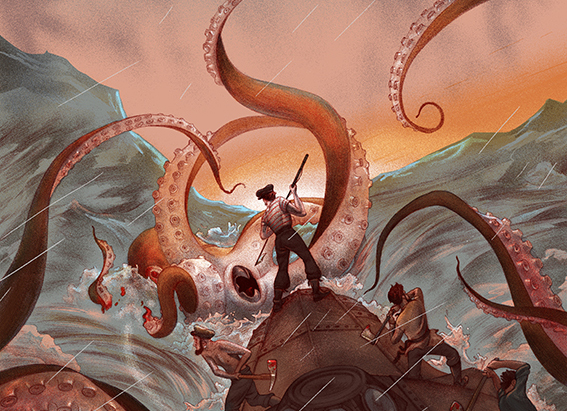 ’20,000 Leagues Under the Sea’ detail by Jonathan Burton

Set up in 2014, Nautilus Art Prints is a small but dedicated operation that releases carefully screen printed, limited edition posters, which aim to re-interpret great moments of European popular culture. Drawing on a rich tradition of craft and creativity, NAP – based in Brussels and utilising the combined talents of designers, illustrators and highly skilled screen printers – offer an alternative to a predominantly US-centric art poster movement currently championed by the likes of Mondo and Dark Hall Mansion.

In their first year, the company commissioned artworks for – amongst others – H.G. Wells’ The First Men in the Moon, Jules Verne’s 20,000 Leagues Under the Sea and a set of four prints for Francois Truffaut films, cementing their intention to bring a touch of class to the art print market.

The Big Picture caught up with Jack Durieux, one of the founding partners, to find out a little more about the workings of this distinctly European operation.

The Big Picture: In such a crowded market of bespoke, limited edition art print publishers – how is Nautilus managing to set itself apart?

Jack Durieux: Nautilus Art Prints was launched by one illustrator (Laurent Durieux), two graphic designers (Thomas & Jack Durieux) and one account manager (Philippe Romain). We are all fellow Belgian citizens, impassioned by creation, and we live and work in the capital of Europe. That may be the reason why our vision is slightly different in a primarily Anglo-Saxon market: a natural proximity with the artists and a European sensibility and approach. 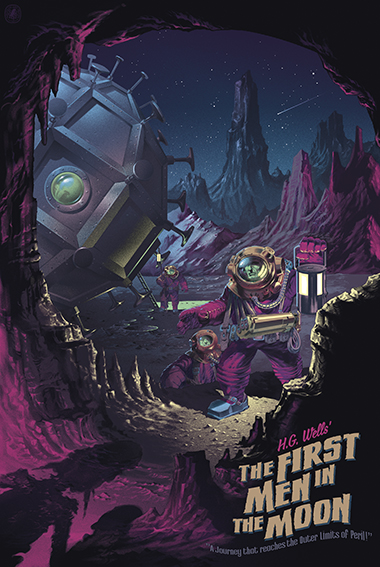 ‘The First Men in the Moon’ by Stan&Vince

Roughly a year on from the launch of Nautilus Art prints, have things developed as you’d hoped? What have been some of the highlights?

We’re very pleased with our first year. We received encouraging reviews and lots of great feedback right from the launch, and every time we release a new print we broaden our community of followers and fans. What makes us prouder though is to have managed to never make any concession over quality. The best example is the François Truffaut set crafted by 4 artists coming from very different horizons and relatively unknown within the alternative movie poster niche. A wonderful achievement in terms of artistic vision and quality that was possible thanks to our two prestigious partners: MK2 and The Cinematheque Française. The Highlight of 2014 was without a doubt our collaboration with comic artist extraordinaire François Schuiten, a true giant as far as the Belgian/French bande dessinée is concerned, for whom we have released a stunning screen print titled ‘revoir Paris’ for his big exhibition at the Cité of Architecture at the Trocadero, in Paris. 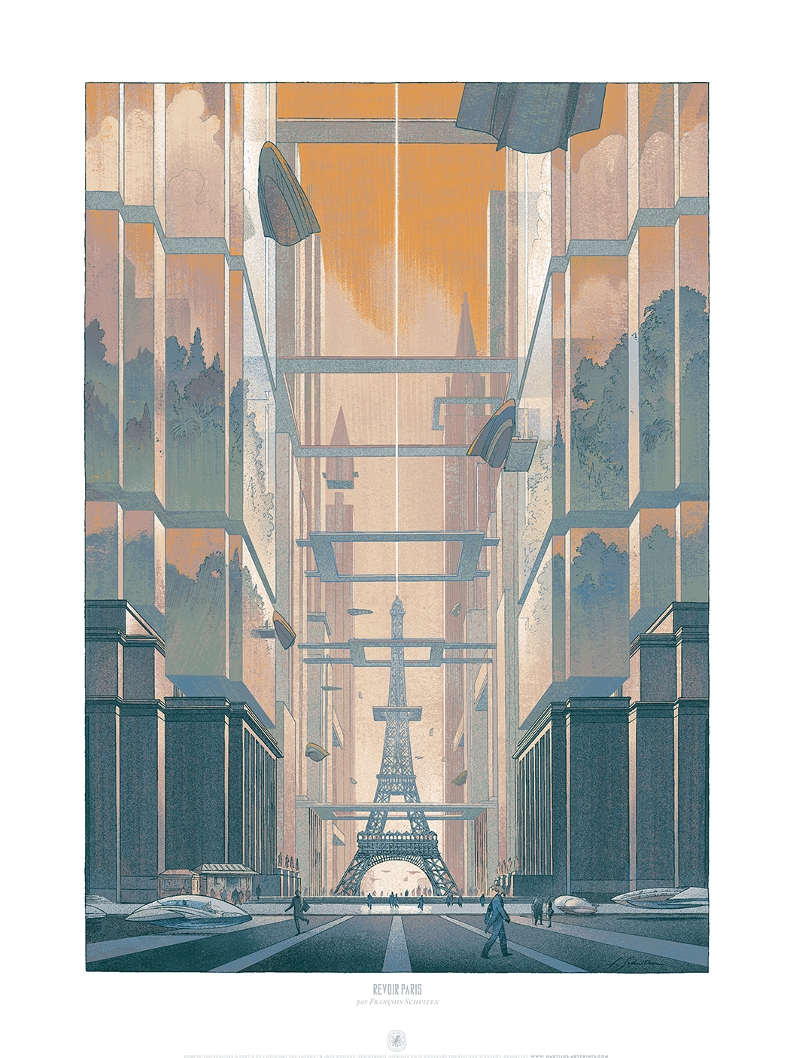 Have you had to adjust your business plan in any way and if so, how?

Well, don’t tell anyone, but we didn’t have a business plan when we launched Nautilus! Our plan is passion for what we do, the discovery of new talent, sharing emotional graphic expression with as many people as possible. This way of doing business seems to be working since we are in profit for our first year. Not a huge one, but still very promising. 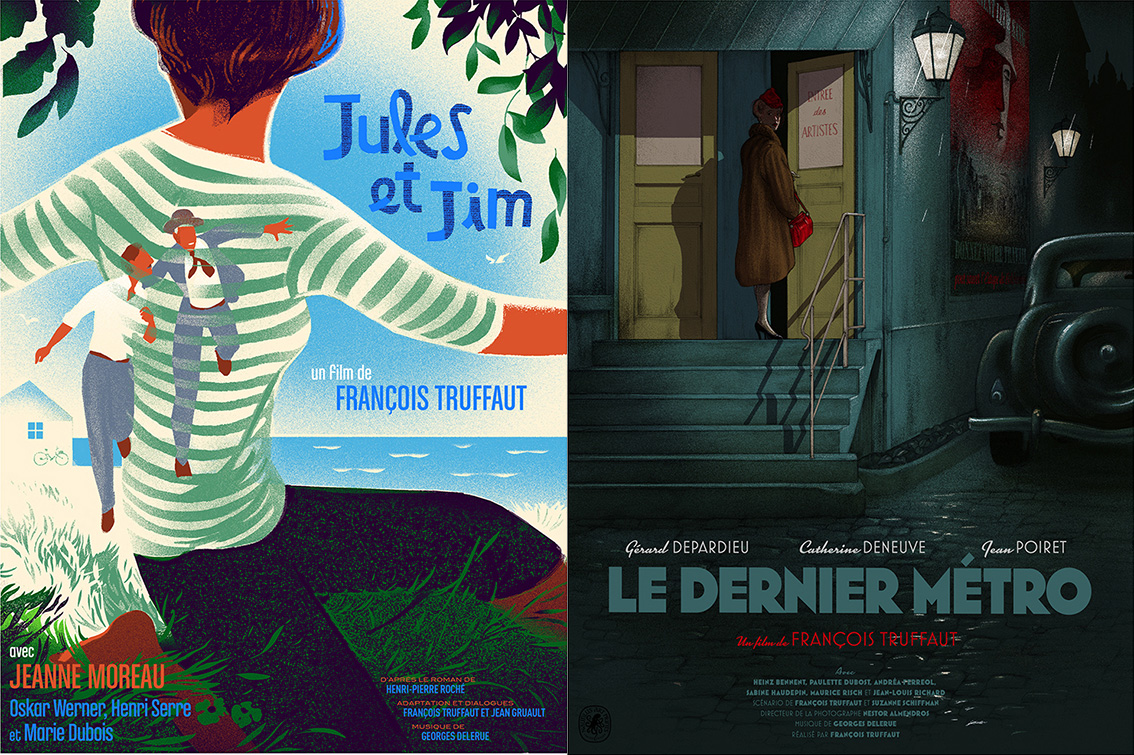 Are you keen on introducing new up and coming talent to your roster of artists or is it a pre-requisite that the artists have an established profile and following before commissioning them?

At the NAP launch, we did set up a long list of artists who had agreed to take part in this adventure with us. Thanks to our collective experience, it wasn’t too difficult to convince them. The new names like the old ones — we all speak the same language you know! At the end of the day, we always apply the same principle: finding the best possible artist for the best project. When a project shows up, we think about the visual universe that comes to mind, we discuss it and we sometimes look for someone that may be outside of our roster of artists. 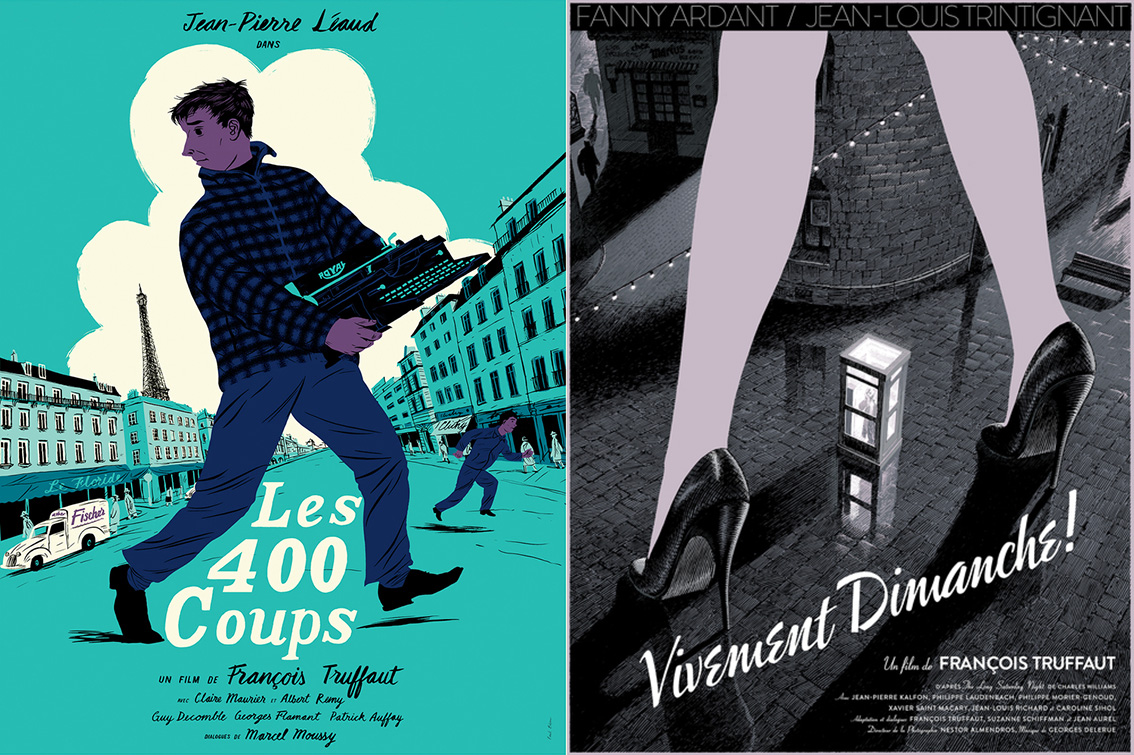 On the subject of commissioning – how much room is there for an artist to suggest a poster subject to you? Are there set criteria for suggestions that you need to consider before going ahead with a print?

Oh yes! When we built our artist base, some of them introduced their universe as well as their wishes to us. In every case, each poster is the result of open discussion before, during and after the creative process. Nautilus’ role as a publisher is also to support our artists in the process of creation.

The initial spark of a project is always related to our emotional connection and how much we love it. Once we have written down a series of themes or titles on which we would love to work, then begins the long and arduous process of finding the licences. Who owns them, what sort of deal to set up, how to financially pay the estates, etc. This can take hours, weeks, months sometimes… And no, nothing can be done as long as we haven’t settled that tedious aspect of the job.

Now that you’ve produced quite a few prints, is it evident to you that your artists approach European pop culture subject matter differently to properties from the US? Is there more room for subtlety and (dare I say) sophistication inspired by the source material?

It’s true that there are important differences in Europe to what is being done in the U.S. However, our goal is to propose posters that focus mainly on popular culture, in finding territories of expression that can communicate to everyone. In the end, whatever the origin of the movie, the novel, the theme we develop — we treat our subjects in the same way. We aim for visual excellence as well as a high degree of originality.

The two recent Jacques Tati prints – for Mon Oncle and Les Vacances de Monsieur Hulot seem to have been very warmly received. What is it about Tati and his films that resonate with the public and make him a good choice for poster material?

Well, the cinema of Jacques Tati is obviously a fantastic subject to work on. His cinema is very graphic, using loads of visual jokes and burlesque techniques. His films are witness to an era which never ceases to inspire creators and which deals with wonderful subject matter, one of which is the absurdity of so-called modernity. This being said, I have to be honest and say that we did take a risk (again!) in introducing such a (not so well known) reference to our community. But like we said, when one loves, one doesn’t count! 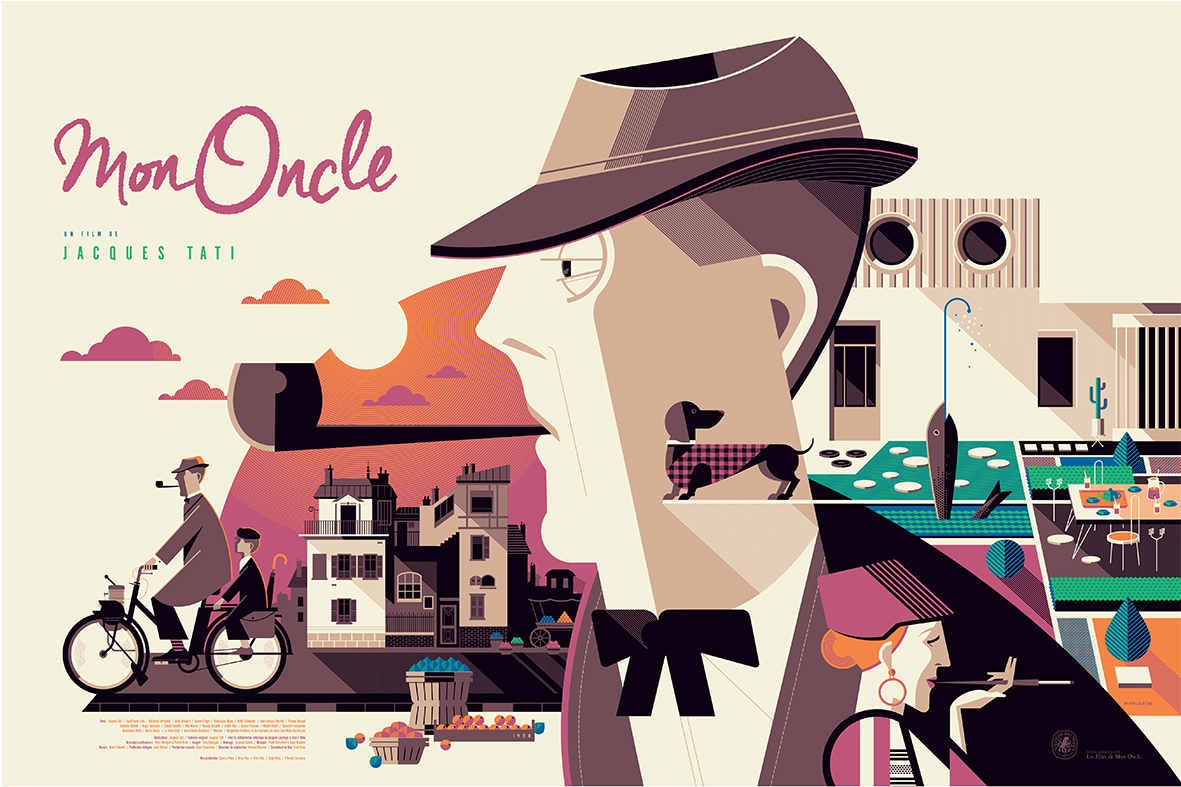 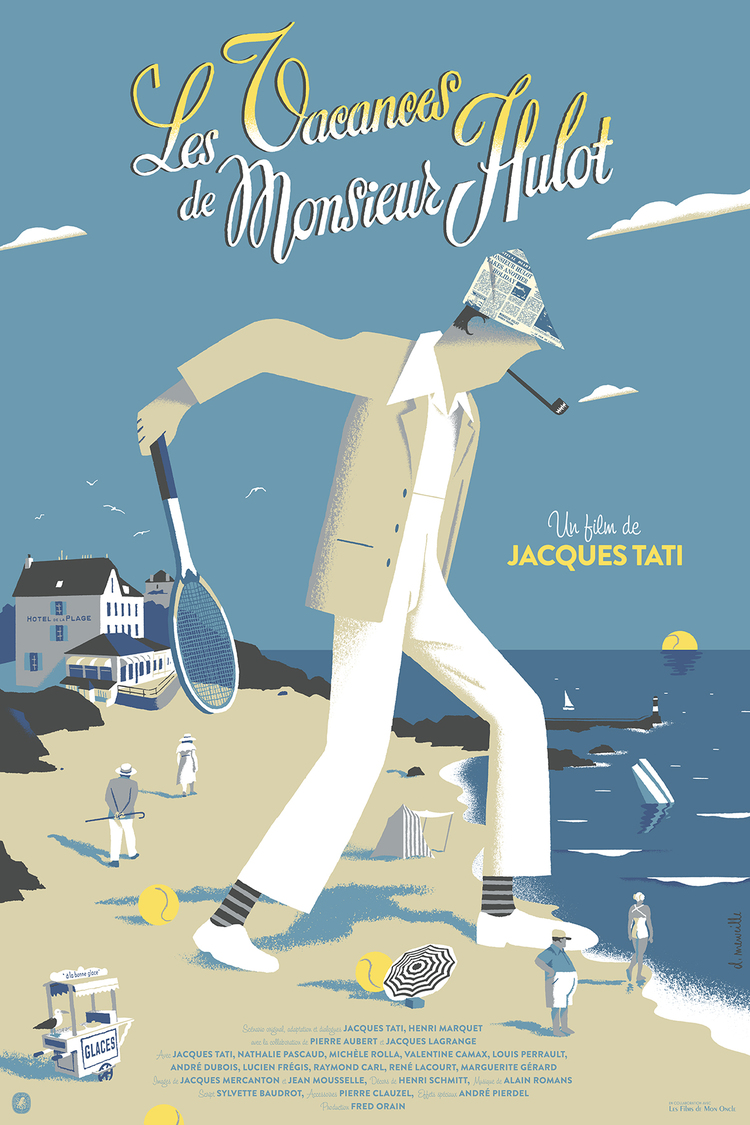 There was talk a while ago in another interview of a possible physical space to exhibit artwork. Any news on this?

Yes, we are still thinking about this possibility. Nothing concrete has been done yet.

The democratisation of the design and print process seems to have increased the interest and value of limited edition prints. Have there been any particular developments, in print or production techniques/facilities, that made it easier for you to set up in business – or are you continuing on in the craft tradition of being the best at what you do no matter the cost?

Nautilus is the meeting point of technology and the craftsmanship of a bygone era. Technology enables us to spread our name and products throughout the world in just a few clicks thanks to social networks; to communicate – in real time – with our artists wherever they may live on the planet, and to prepare the printing job with precision. But then it’s up to the craftsmen to do what they do best! Like we said earlier, we are obsessed with quality. Which means that in terms of production, we hire craftsmen screen printers extraordinaire. There aren’t that many left of that caliber, at least not in Belgium or France, especially in this age of ‘quick and bed’ digital printing. Also we take great pride and care in rolling and packing our screen prints. They are our babies, you know!

Art poster print companies such as Nautilus seem to have unshackled themselves from the tight creative restrictions imposed by film marketers (and have managed to thrive financially in the process) – resulting in posters that are as much an art piece as the film itself. This seems to be a return to the golden age of film poster art from 1950s/60s in Eastern Europe when illustration was king – although now the artwork is independent of the film release schedule entirely; free to act as a standalone commodity. The question is – can the two work more closely together? Is it realistic to think that Nautilus – or the artists you represent – will be hired by a production company to do the artwork for a new release?

Oh absolutely, it’s possible. We are in talks with many major studios who own catalogues of existing films and who also put out new films every week. We haven’t yet been asked to design such a poster, but we are certainly paying attention to that. However it is true that the huge financial investment involved in the release of a film is such that a producer will, most of the time, choose marketing over artistic quality. It’s sad, but things are starting to change.

And finally, what are your plans for the coming 12 months? Any surprises in store that you’d be happy to reveal to our readers?

Well… we are about to release a poster designed by a fantastic intellect for a movie that suits him like a glove: Carol Reed’s The Third Man with Orson Welles. And in a few months from now, we should hopefully put out 10 posters that will celebrate some of the greatest names in cinema!

One reply on “Interview: Jack Durieux and Nautilus Art Prints”

[…] admin May 27, 2015   |   Leave a comment To accompany our recent interview with Nautilus Art Prints, The Big Picture is giving away a pair of limited edition posters for classic Jacques Tati films by […]