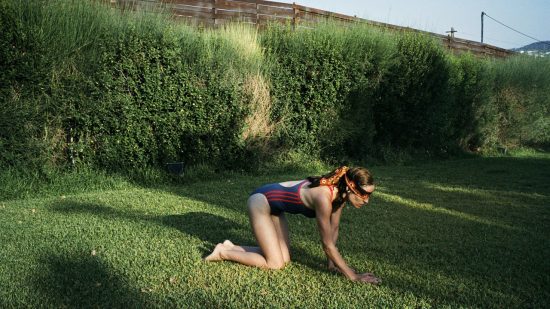 According to psychoanalyst Jacques Lacan, our personalities are formed through our relationship to language as we encounter things, and seek to explain who we are in relation to them. This is a completely personal: no one person has ever been – or ever will be able to experience this in the exact same way, because the way we experience life and language is unique, and different from one moment to the next. So what happens when you bring up a child and excessively limit their capacity to experience the wider world?

Yorgos Lanthimos’s Dogtooth does just that. Set in contemporary semi-rural Greece, a mother and father raise their young-adult children in the isolation of their home, restricting their contact with the outside world. The father (Christos Stergioglou) drives to work at a factory every day, leaving the mother (Michelle Valley) to supervise the children: two sisters and their brother (Angeliki Papoulia; Mary Tsoni; Hristos Passalis).

Occasionally, an outsider is introduced: a female security guard from the father’s workplace (Anna Kalaitzdou). She’s driven to the house blindfolded, ensuring the utopian seclusion can be maintained without interrogation from the outside, indicating that even in the stark reality presented on screen, there is an unspoken social prohibition.

Within the house, the father facilitates his children’s learning by setting a number of tasks, which he rewards with stickers. Their reaction to these prizes is disturbingly out of sync with how the audience might react to these same items, establishing an uncomfortably discordant tone, which builds as we see characters talking to bushes in the garden and fearing for their lives when a domestic cat jumps over the fence. 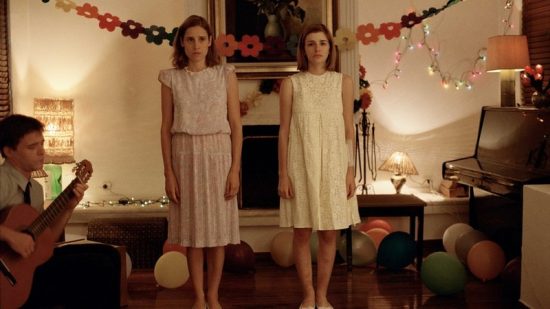 The father and his wife see themselves as protectors of the children, ensuring they are not damaged by the world and its disruptive or manipulative ideologies. The father removes the packaging from water and food before he drives into the compound, and the landscape beyond the gate is, to the children, a violent space where they are at risk of instant death without the father’s protection (hence the cat being killed on the lawn.)

The irony here is that these broader territories are actually sites of emancipation that the children – and indeed any human being – need in order to free themselves of the limits imposed on them since birth. Access to new social groups and therefore new ways of comprehending the world are vital to our psychological development.

For Lacan, lived experience is constituted by three registers: the Real, the Imaginary and the Symbolic. The Real is impossible to articulate. It is what we experience in the womb, where any need or desire was immediately met, with no need for language. The Imaginary is something like a shortcut for understanding the world, using the phrases we are exposed to in order to conceptualise demands, fears or values as images, or discreet units of understanding. The Symbolic register is that of creativity, discovery and social law.

If we are granted access to the symbolic realm we are capable of reaching out into other social spheres and constructing our personalities around our experiences there. For the children in Dogtooth, though they have the mental capacity to engage with the Symbolic, it is denied to them through their imposed hermetically-sealed existence. This is categorically dangerous from the psychoanalytic perspective: unexpected encounters with the wider (Symbolic) world are met with exaggerated fear, misunderstanding and violence.

None of the children are capable of synthesising these unexpected events through their narrow realm of experience, and therefore react in ways which unsettle the viewer as much as themselves. There is potential for irrevocable change, but it requires a shattering of the world as they know it – the constricted world given to them by their father. This act of liberation gives the film its name:

“When is a child ready to leave the house?”
“When the dogtooth comes out.”
“Only then is your body ready to face the dangers that lurk.”

This fabricated rule enforced by the father is supposed to ensure they will never leave. However, influenced by the contraband items traded with the security guard, the older daughter takes painful and bloody action to remove what she believes is her dogtooth, therefore gaining the courage to escape and find out who she is in the world beyond the father’s house.

Exposure to the wider world – even a hostile world – is fundamental to our development as individuals capable of empathy and creativity: two traits almost entirely absent in this film. Dogtooth is an experiment in foreclosure of the Symbolic, and this is why, for the viewer, the actions of the children seem so unsettling. They exist in isolation, doomed to live without reference to the world we know, unless the “dogtooth comes out”.