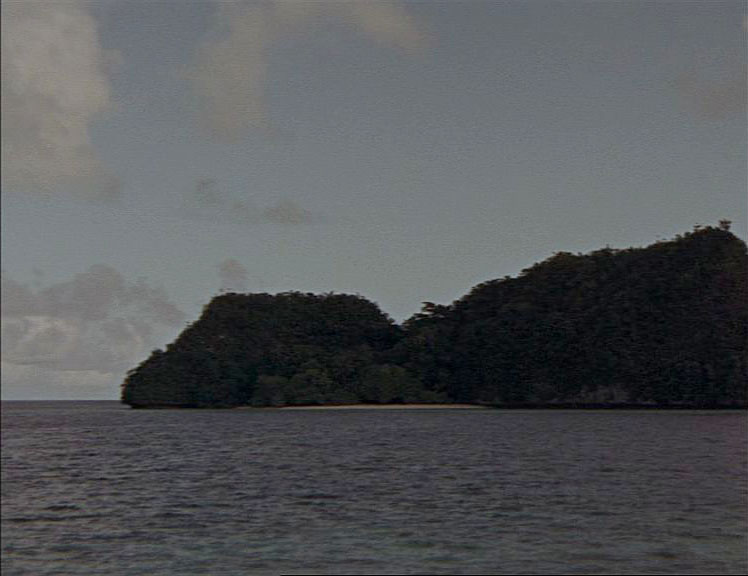 The great outdoors – here a maritime space – is a protagonist in its own right in John Boorman’s two-character film Hell in the Pacific (1968). The two marooned soldiers, played by Lee Marvin and Toshirō Mifune, fight for survival on an uninhabited atoll and fight each other before facing together the hazards of the Pacific Ocean.

The setting in the first part of the film is an isolated island in the Pacific Ocean. Multiple shots of a natural environment with no signs of human presence punctuate the narrative. Both the jungle and the wide open sea indicate the paradise-like character of the setting but also its potential hostility. The island is, except for a small beach and a few rocks, dominated by an almost impenetrable jungle of lush vegetation that is also a threat because of the lack of water and edible plants. The ocean poses other risks: the breakers which the protagonists have to overcome on their small raft, violent storms, and the dead calm which they encounter once they have reached the open sea. The jungle’s darkness contrasts with the turquoise of the ocean and the pure white of the sand; it’s rather like a womb in which the American marine pilot hides but which he must leave if he wants to survive. The impenetrable darkness created by a tangle of branches and plants is that of a voracious landscape – untamed, chaotic and primeval. 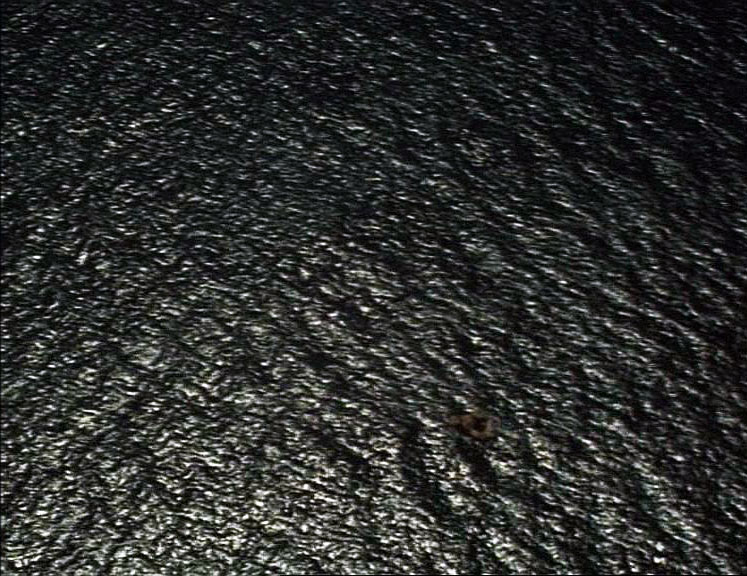 The weather is another indicator of the dangers of nature that the protagonists are exposed to. They have to face extreme heat, torrential rain and stormy winds. The sun is a giant ball which shines down pitilessly on the two soldiers exposed to its scorching heat. The glittering blue of the sky and the water changes into the lead-grey of a storm-tossed ocean and overcast sky. Shots of the island in the empty Pacific and of the sea and the raft, almost indistinguishable amidst the waves, transform the men into miniature figures, revealing mankind’s insignificance in creation.

The first encounter between the two men is filmed as a blend of realism and dream. The unnamed protagonists, one armed with a bamboo stick, the other with a knife, stare at each other, keeping their distance. A succession of quick shots shows them running towards each other, shouting aggressively. The Japanese overpowers the American, but then the American stabs him in the stomach. Suddenly the camera is static again and the viewer realises that they have not moved at all. The previous shots have revealed the killing instincts of two antagonists, each of whom nevertheless understands their mutual dependence.

In the false paradise of this isolated island, men have to rely on creativity and sheer willpower. The Japanese, the first to be stranded on the atoll, has developed several survival strategies: a system to collect rainwater, a basket made of branches to catch fish. However, his real enemy is not the hostility of the natural world but that of other people. The island, as a metaphorical place, is the setting for an inner journey into a heart of darkness, into violence and into man’s very nature. 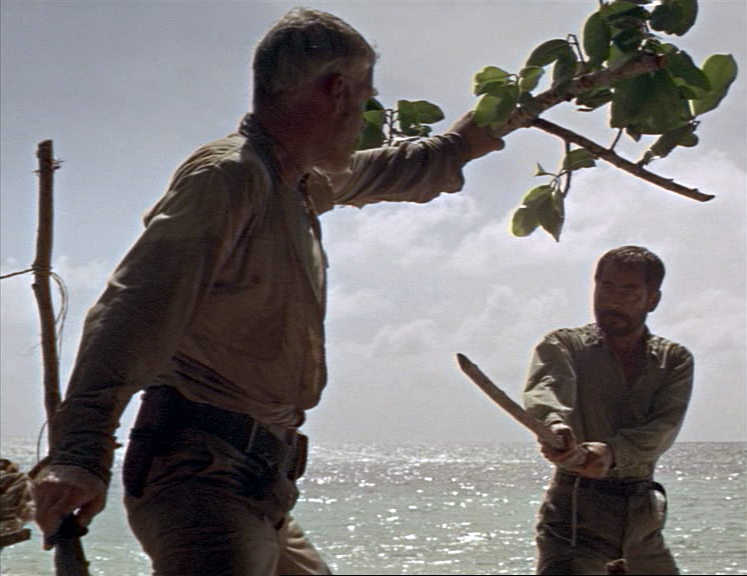 The first and longest part of the film establishes a cat-and-mouse game between the two marooned soldiers. The Japanese defends his water reservoir; the American tries to gain access to the precious liquid. Constantly on the alert, the Japanese is on the lookout for the American hiding in the undergrowth and starts a fire to flush him out. Frequent close-ups and medium close-ups of the two actors reveal the tension the characters are exposed to. At one point, the Japanese captures the American. He ties him to a roughly constructed wooden yoke and blindfolds him. However, the situation is suddenly reversed when the American manages to escape, overpowers the Japanese, and ties him up.

The American takes pleasure in ordering the Japanese to fetch a stick, just like a dog. The Japanese, motionless, refuses to play the game, and eventually his opponent becomes tired of it. The instinct for survival is greater than the wish for revenge. The American sets the Japanese free, who then shows him where to find the bamboo necessary for building a raft.

There is little dialogue in the film; each man speaks in his own language and the other does not understand. Mifune’s words are not subtitled in the version distributed in western countries. However, this does not necessarily mean that the viewer is automatically aligned with Marvin’s point of view. The characterisation of both relies on clichéd visions of Americans and Japanese. The American as played by Marvin is a rather laid-back and clever man; Mifune’s naval officer is always active and more inflexible but nevertheless capable of violent outbursts. The Japanese refuses to share his water, which could be seen as cruel but is also understandable given his extreme circumstances. Not unlike the Japanese people, who defended their homeland against various attempts at conquest throughout history, this soldier protects his fragile survival system. 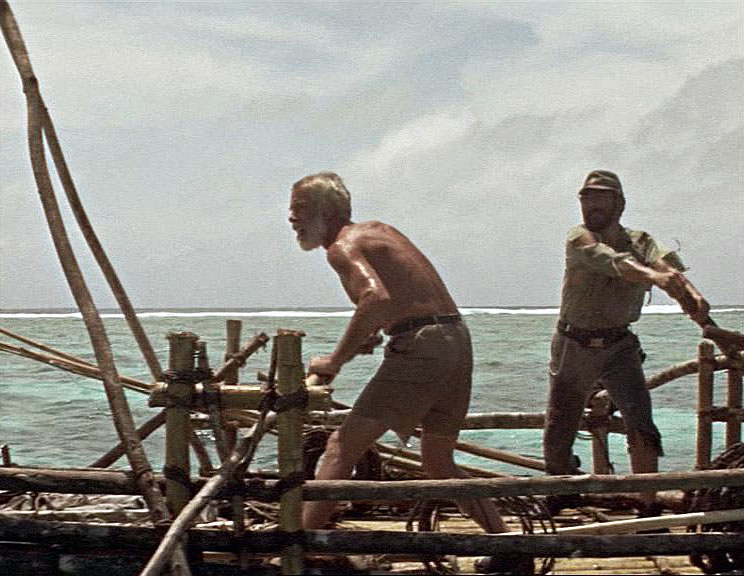 The tall, grey-bearded American marine pilot, covered with mud and insects, is a pitiful figure bearing his yoke rather like Christ bore the cross. However, he is only a mock Christ and manages to escape quickly from captivity. He is the first to humiliates his opponent, which he does by urinating on him. The American is the intruder on the island, where the Japanese has already established his own delicate survival system reminiscent of the system of autarchy in Japan that was established in the 17th century. The American’s nonchalant behaviour does not make him appear sympathetic and reveals the ugly face of an ideology which exploits and destroys. The sequence in the garden laid out by the Japanese is typical of the American’s lack of respect. He enters the stone garden laid out on the beach and, leaving his footprint in the carefully raked rectangle of sand, destroys its inherent harmony. His disregard of what is important for others reveals him as an immature, childlike individual who, when he encounters a much older and deeply complex culture, completely ignores it.

Neither tries to learn the language of the other, and both continue babbling in their mother tongue. However, there are moments of mutual understanding and solidarity. The Japanese, still tied up, finds the knife which the American has left for him. Later on, he sharpens it and gives it back to its owner. The highly nuanced performances by the two actors make use of facial and bodily expressions to reveal the thoughts and feelings of the characters they play.

The absence of subtitles does not privilege one character over the other but emphasises the lack of communication and its consequences. The viewer, unable to understand the Japanese (or the English) words, is to some extent allowed to share the experience of the protagonists, whose fragile relationship of uncertainty is at risk of collapsing at any moment. The language barrier creates misunderstandings which fuel the state of permanent tension they are forced to endure. Mistrust and fear prevail, despite the truce. The last shot is that of another no man’s land: the ruins of a bombed and abandoned military installation. Escape from the primeval island has led them to a place where mankind has destroyed nature and destroyed itself.

Boorman makes the island setting of the film into a multifaceted symbol. Hell in the Pacific discovers hell in other people (as did Jean-Paul Sartre), but points to the fact that nobody can manage without the help of others. Men need other men for survival. “Man is by nature a social animal,” Aristotle wrote. Or to put it with John Donne: “no man is an island”.