The first shot in Akira Kurosawa’s Ikiru shows an X-ray. A voiceover reveals that this is the stomach of Watanabe, the film’s central figure, who is terminally ill with stomach cancer. An ordinary man suddenly confronted with death and the futility of his existence, he is desperately trying to find a meaning in life. 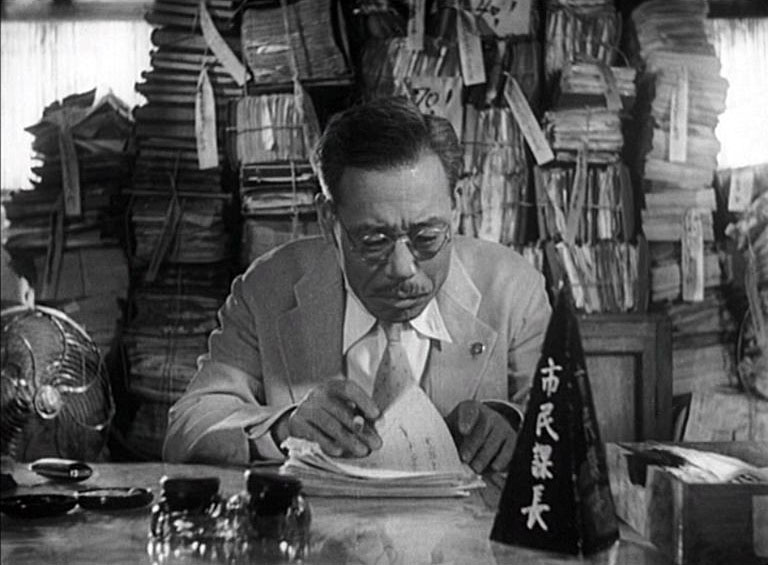 Kurosawa makes use of illness as an approach to questions about humanity in a complex narrative structure of voiceover narration, flashbacks and narrative ellipses. Watanabe is the head of a department in a town hall, where he has been employed for thirty years without ever taking a single day off. He is shown sitting at his desk with a huge pile of documents behind him threatening to collapse and bury him, creating obvious visual closures. The narrator depicts him as a man who is already dead: “We can’t say if he really is alive at all. He is like a corpse.”

Indeed, the nickname the young female employee Toyo has given him – ‘mummy’ – is most appropriate. When Watanabe hears about this nickname, his facial expression and his silence reveal how much he is hurt, but then he joins in the young woman’s laughter. Later, he explains his attraction to her: “It’s just when I look at you, it warms my heart – that mummified heart of mine.” 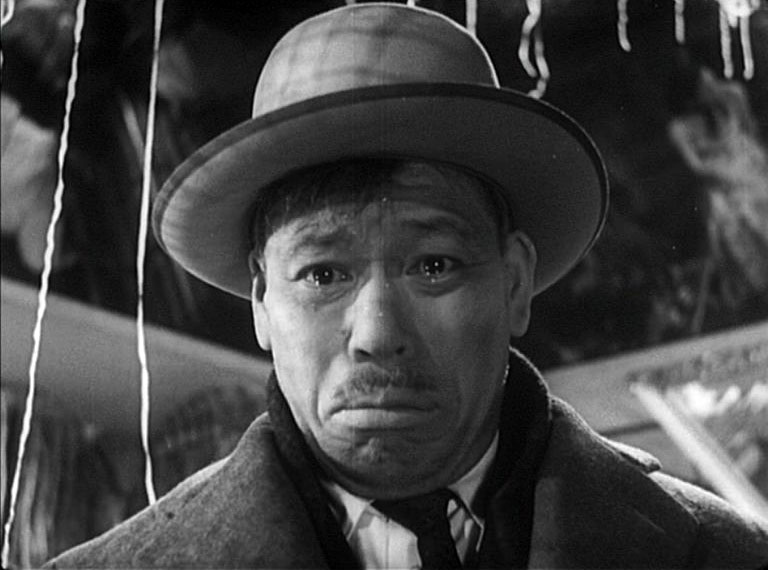 This awareness of the closeness of death leads to a state of anger and despair for Watanabe. He compares his present feelings to the engulfing blackness he faced as a child when he almost drowned. However, Watanabe seems less tormented by the fear of death than by the feeling that his life has been a waste. “How have I lived during the last years?”

Unable to kill himself, he attempts to make up for wasted time. He has never drunk alcohol before and now starts, but he does not enjoy it. He invites a writer he meets one evening to help him spend 50,000 yen, his savings of many years. Fascinated by Watanabe’s rebellion against his “former self”, this stranger encourages him. “It isn’t immoral to enjoy life. This is rather a duty.” 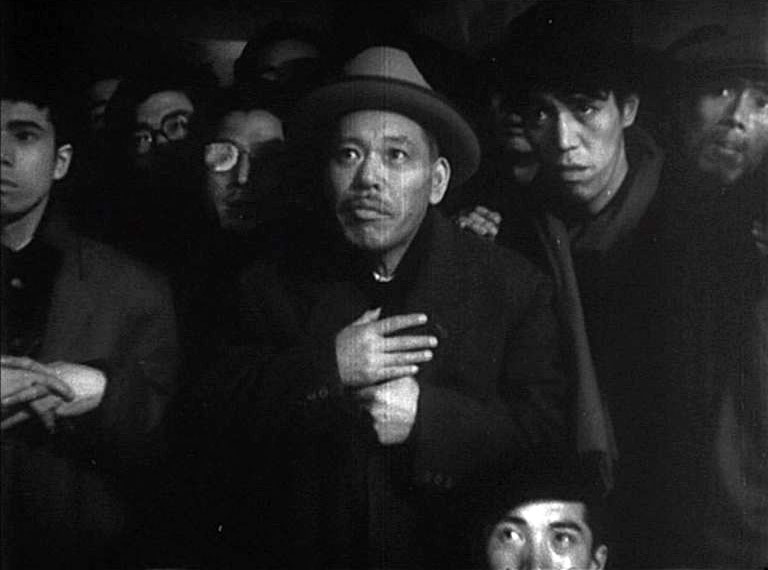 Together the two men play pachinko (which the writer calls an “automatic vendor of dreams”) and visit dance halls and nightclubs. These nightlife adventures are depicted as a descent into hell, with Watanabe’s zealous guide seeing himself as Mephistopheles to Watanabe’s Faust. In these crowded and noisy places, people are nameless bodies, mere flesh. Mirrors creating the impression of large spaces point a critical finger at this illusionary world of glitter and superficiality. Watching a table dancer, the drunken Watanabe expresses his amazement by shouting and gesticulating. However, most of the time he seems lost and disoriented. Takashi Shimura’s flawless performance expresses to perfection the protagonist’s confusion. His eyes wide open in astonishment or fear and grasping his guide’s arm to keep his balance, he resembles a child discovering a previously unknown world.

Having found no pleasure in the world of entertainment, Watanabe starts seeking Toyo’s company. He explains his attraction to the young woman, who is soon annoyed by the elderly man’s attention to her based on her youth and liveliness. Speaking in a very soft voice and with his head lowered, Watanabe’s passivity is, as in other scenes, contrasted with Toyo’s energy. She frequently bursts out laughing, eats with great appetite (Watanabe has no appetite) and enjoys watching a movie while Watanabe falls asleep.

Watanabe’s wish to spring into action comes unexpectedly. One moment he expresses his desperation – “It is too late” – and the next, he jumps to his feet, shouting: “No, it is not too late.” While he is rushing down the stairs in the tearoom, a group of students celebrating the birthday of one of their number start singing “Happy Birthday”. Watanabe is indeed reborn, even if his rebirth is short-lived, because the doctor’s prognosis is correct and he dies five months later.

In the next sequence, he is shown back at work, now reading a petition signed by a group of women seen earlier in the film. The women’s application to have a cesspool cleared out and a playground for their children built on the site has failed because of the corrupt and inefficient bureaucratic system that Watanabe is part of. 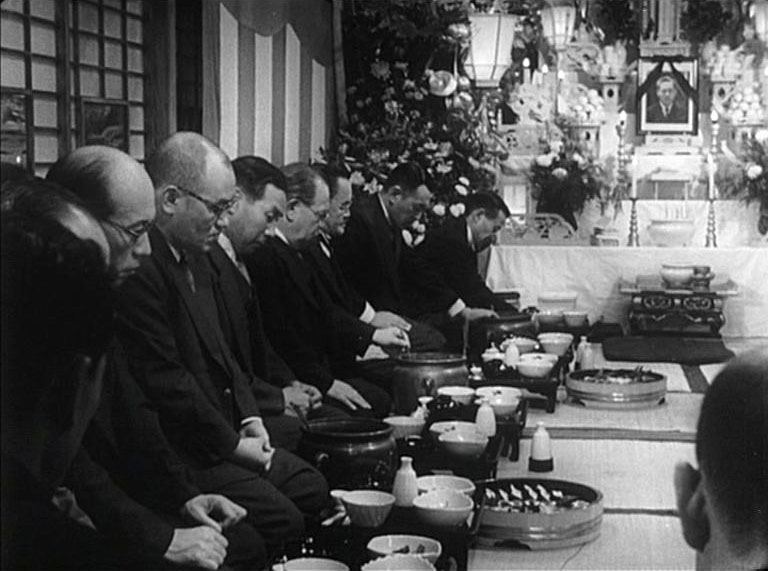 The last part of the film centres on the dinner after his funeral, with a photograph of the deceased placed on the altar in the background. Watanabe is no more than an image – and from the very beginning he is the object of others’ gaze. The medical doctors, his family and his colleagues, the voice-over narrator – they all talk about him. They discuss his illness or speculate on his relationship with Toyo. The writer has a romanticised image of Watanabe – “a Christ bearing the cross of cancer” – and is disappointed to learn about his ordinariness. The deputy mayor and some of Watanabe’s colleagues and subordinates refuse – out of opportunism and jealousy – to recognise the man’s extraordinary determination and his crucial role in the construction of the playground.

His colleagues and the members of his family ask themselves why Watanabe changed so much in the last months of his life. Their memories – recreated through a series of flashbacks – reconstruct their image of Watanabe, and they finally realise that he played a crucial role in the decision to build the children’s playground. They promise to follow his example and to ensure that the example he has set was not in vain.

However, the sequence after the funeral clearly shows that they continue to behave as before. The slightest attempt at individual initiative is suppressed, and the image of the employee sitting at his desk with a huge pile of documents behind him underlines the persistent paralysis in the bureaucracy of administration.

The fact that Watanabe is denied a viewpoint of his own is a reference to his vulnerability as an individual. Not unlike the tuberculosis which eats away at the body of the yakuza Matsunaga in Drunken Angel (Akira Kurosawa, 1948), illness is employed as a means to describe the decayed state of Japanese society. The passive and corrupt bureaucratic system is at the core of this social disease and is its cancer. Corruption is mentioned in the dialogue and illustrated in the flashback sequence in which Watanabe is the target of the criminal site-developers, who threaten him outside the deputy mayor’s office. This situation makes very obvious the link between politics, industry and crime.

The crisis in Japanese society is also reflected in the pseudo-liveliness of the nightlife scenes, in the problems of communication between the generations, and in the gap between rich and poor. Toyo cannot afford imported products such as nylon stockings, and the dinners with Watanabe allow her to eat decently and in places to which she could not afford to go. 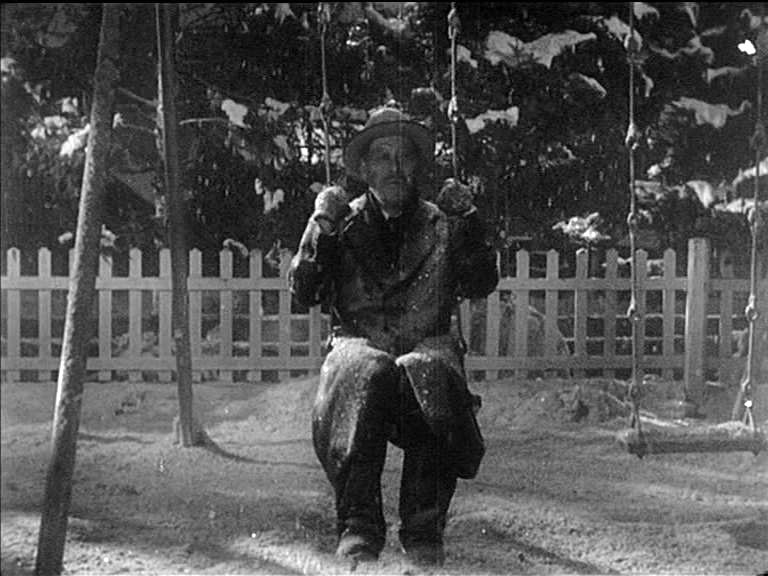 Watanabe dies on the children’s playground he has created. He remains an enigma, but the snowy setting with its reference to purity and fragility, hope and innocence, and also the direct action the hero took to have the playground built, reveals that he was a man of makoto, the sincerity which stems from genuine feelings. He is finally revealed to have been a real human being and thus far more than the abstract image of an X-ray.