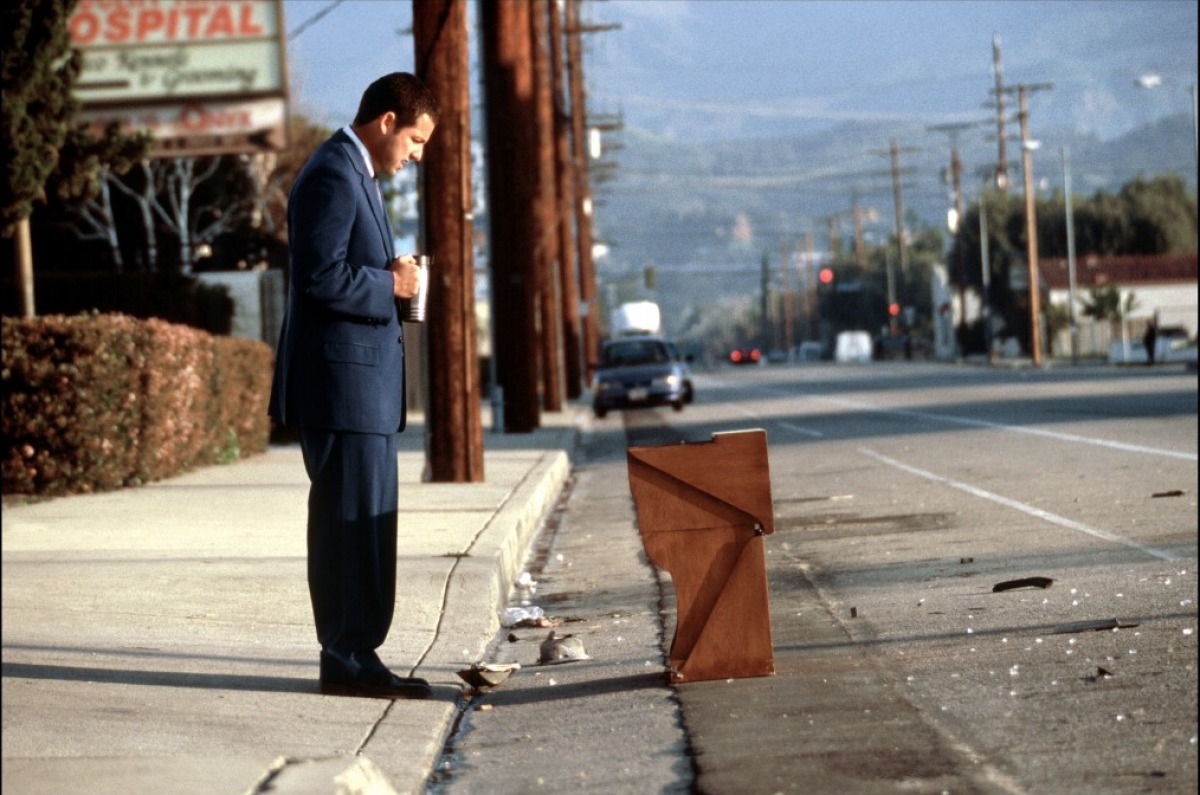 Paul Thomas Anderson’s Punch Drunk Love is unabashedly romantic. The film has a wide-eyed, almost naïve belief in the power of love told through the story of the child-like Barry Egan (Adam Sandler), and the symbolic use of an obscure instrument.

When Barry finds an old harmonium outside his office, it’s somewhat unexpected. Landing on the sidewalk after a bizarre car accident, the broken Harmonium’s arrival into Barry’s life is, by no coincidence, not unlike the introduction of Lena Leonard (Emily Watson), arriving as she does at Barry’s office with a broken-down car.

When Barry finds the Harmonium, it is broken, unplayable. As he and Lena grow closer, however, he begins to repair the instrument. Likewise, he begins as an angry, impulsive man, prone to fits of explosive rage, and it is only when Lena (and the harmonium) enter his life that the gentle, loving side of his personality shines through. Where most would find his awkward demeanour off-putting, Lena is charmed. Just as Barry sees the potential inside the neglected instrument, Lena is able to see the sweet man within Barry.

Jon Brion’s score makes extensive use of the instrument associating the sound with Barry:when Barry repairs the Harmonium, he is repairing himself. When Barry is alone, the music is melancholy, in stressful moments it’s frantic and cluttered. But when he’s with Lena, the music is joyous, almost saccharine, like something from a Doris Day musical. Indeed, Barry’s trip to join Lena in Hawaii is scored by a song from Robert Altman’s Popeye, a film almost totally indebted to classic Hollywood Musicals.

The scene in which Barry confronts his aggressor, the ‘Mattress King’ (Philip Seymour Hoffman) is key. At this point the impact of Lena upon his life becomes clear. “I have a love in my life,” he proclaims, “it makes me stronger than anything you can imagine”. After this realization, he picks up the Harmonium and runs to Lena’s apartment, finally able to give her his heart.

In the film’s closing scene, we see him playing the instrument, and in a moment of cinematic harmony, he plays perfectly in time with Brion’s score. For the first and only time, Barry’s playing resembles something approaching music. With Lena next to him he brings out the sweet sound of the instrument that he was incapable of reaching before.