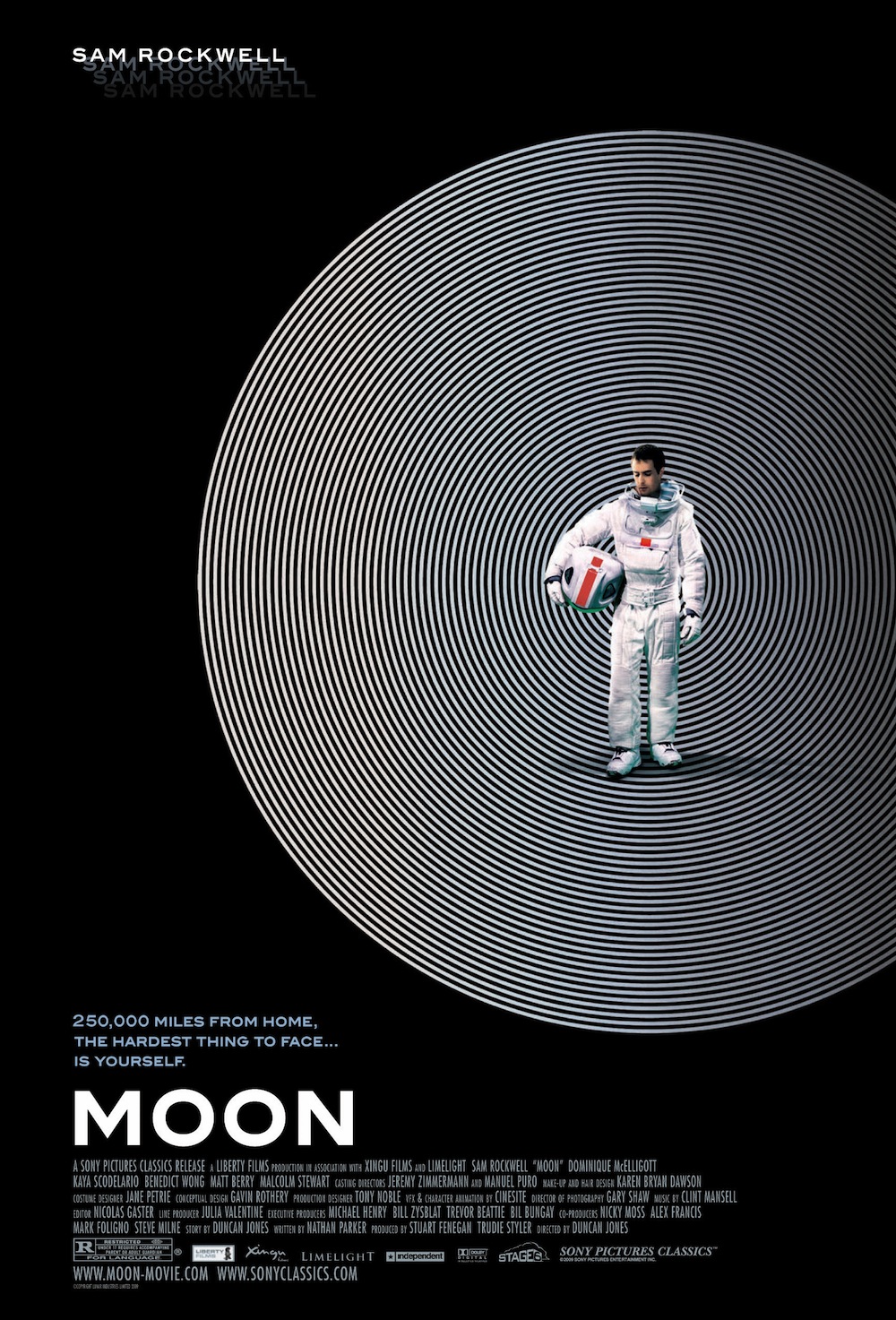 Through the years, science fiction posters and subtlety have not been the best of pairings. Forbidden Planet gave us one of many over-saturated and melodramatic visual spectacles: the eye-catching (if absent from the film) scene of Robbie the Robot kidnapping a scantily-clad woman, and the word ‘AMAZING!’ stamped on top. Star Wars started a trend for ambitious painted montages, which Blade Runner followed with a noir-inspired triptych. Indeed, the majority of the twentieth century’s iconic sci-fi posters threw in everything but the Death Star canteen’s sink.

Moon takes a different approach. This poster for Duncan Jones’ 2009 debut is sci-fi artwork through the eyes of a minimalist. Sam Rockwell’s suited-up astronaut is the centerpiece against the backdrop of a graphic representation of the moon itself. We’re clearly looking at a poster for a science fiction film, but one that’s stripped down and, on the surface, simplistic.

Rather than the history of the genre’s artwork, the poster takes its inspiration from the artwork of Saul Bass. The Vertigo-esque rings that form the moon bring with them connotations of suspense, of delusion, and of a classic style of psychologically deep storytelling. Like Bass’ many famous posters, this image is captivating in its simplicity.

This simplicity allows the poster, like the film, to be a character-driven piece. Alone, moody, and oppressed by the blackness of space around him, Rockwell stands out as a character tormented by the film’s themes of isolation and loneliness.

Yet, just like the film, the image is full of hidden depths and invites a second viewing to get the full picture. Look at the duplication of Sam Rockwell’s credit, each name fading further away, and at the way he has multiple shadows echoing across the moon shape – two subtle elements hinting at the same twist as the tagline. Though the poster doesn’t overtly say it, by the end of Moon, Rockwell will have had to face himself in more ways than one.

With Moon and its follow-up, Source Code, Duncan Jones has established a reputation for intelligent science fiction filmmaking that does new and interesting things while remaining clearly enshrined in the genre. Both have a strong core concept but are in fact deep character studies full of hidden depths. This poster captures that essence perfectly. Its striking design draws the eye, invites the viewer to ask questions, and would happily hang on any genre fan’s wall.