Home Features The art of the film poster: Interview with illustrator Tony Stella 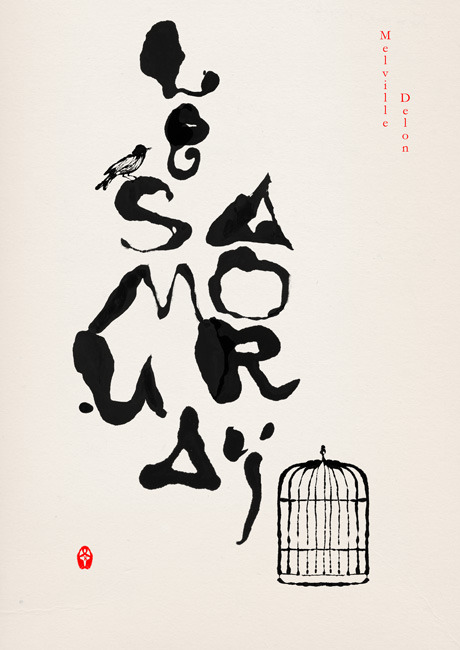 How can you reimagine some of the best classic movies and give them new life? How can you visually capture the essence of a film? How can you embody a film’s cult status? How can you own a part of a movie you love? How do you add to the cultural significance of film language and to visual literacy? How do you catch the imagination of the most avid cinephile as well as that of the most reticent movie-goer before they even watch a film? Artist Tony Stella does it through his movie poster designs. In a time when technology has changed the concept of art itself, from graphic design and illustration to photography and filmmaking, Tony’s hand-painted, unique, arresting illustrations, suffused with his passion for and knowledge of cinema and cinema history, are reclaiming poster design as a form of art in its own right. They are a love letter to the world of cinema. And as soon as I saw Tony’s poster for Jean-Pierre Melville’s Le Samouraï – nobody had done it that way (all of Melville’s elements that draw inspiration from the Japanese culture and cinema are there) – I wanted to find out more. Here is my interview with the artist. 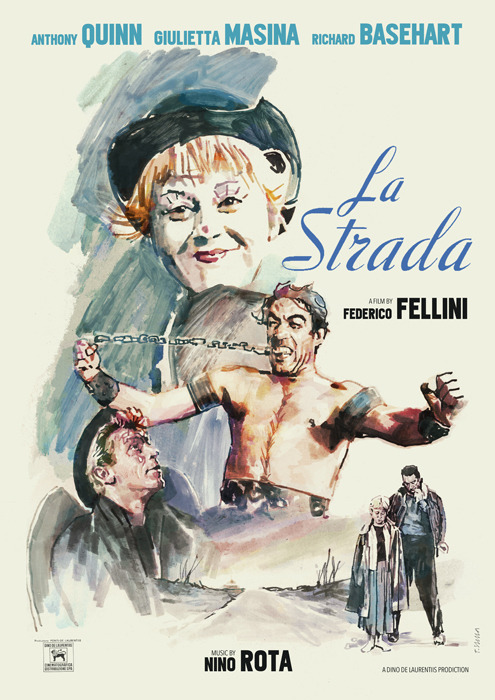 I think a poster is a part of a film. I believe poster art (just as the art of the title sequence) is a medium designed to speak to the public before the film does, the window to the world or story waiting for you to discover. It can add a whole extra dimension to the picture. How would you regard your work?
When it comes to my personal work, I see it foremost as an homage to the films I love and to the people who made them. It all started this way – as a kid, I wanted to continue on in the world of the movie after it was over. When it comes to client-work, I see it exactly how you describe it – it used to be the first interaction with the audience; now it often feels like a neglected afterthought, but the smart distributers know it can add great value and longevity to their product.

And I believe that a good poster will have a life past the release date, and will always linger as a reminder of the film it represents. And it will make you want to frame it and put it on the wall. What makes a good movie poster in your opinion?
That is almost impossible to say – I am attracted to all kinds of works, from high art to the super sleazy airbrush of my youth. Some are great because they capture the essence of the film and through their artistry are able to add another layer of mystique to it – like the work of Bob Peak, Richard Amsel, Drew Struzan or Noriyoshi Ohrai. But there are also many crazy, wild, beautiful posters that have very little to do with the film and can stand on their own like the Polish posters – or the fantastic mixed media collage Czech poster style. Some masters like Saul Bass have almost made it impossible to follow in their footsteps – I admire how he imposed this style on each project regardless of genre and yet they are all perfect representations. In the end, it wasn’t the one great poster but the variety of styles and reinterpretations from each country that made the posters great and enriched the film landscape. 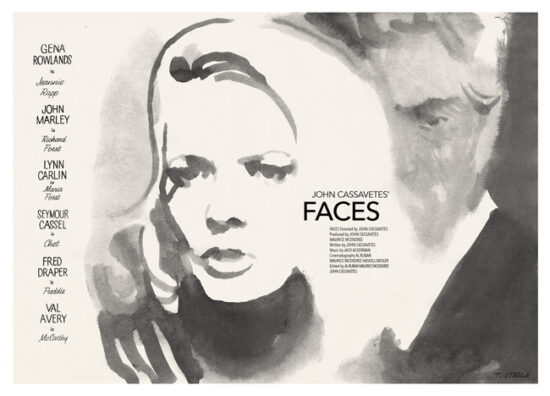 Your hand-painted and imaginative illustrative style (or, simply put, art in the true sense of the word) taps into an earlier age of film poster design. Are people afraid to be creative these days?
Only when it comes to the big projects and agencies they have to appeal to the widest audience and, in trying to do so, mostly miss the mark of great posters. There is a small trend towards the original, unique poster again – kick-started by the Criterion Collection and the growning wave of fan-posters, but the trained eye for subtle differences just isn’t there anymore and the photoshopped “traced” posters are still the norm and often get passed as hand-made work.

What sparked your passion for cinema? And which were your earliest influences in your work?
My parents forced me to watch a lot of great movies – so that muscle got exercised early on. I would have passed on La Strada for Police Academy in a second, but that wasn’t an option. After seeing Seven Samurai at age six, there was no turning back – everything got measured by that yardstick. That passion has never subsided. Later in my group of friends, movie-knowlege was a currency and a short hand of communication. Staring at all those VHS covers and posters dreaming about the glories they promised was always my impulse to start drawing – even if I hadn’t seen the film. Through the years, I could find out many of the great illustrators and attribute their work, but most of them are still unknown to the public. Thank you, Renato Casaro! 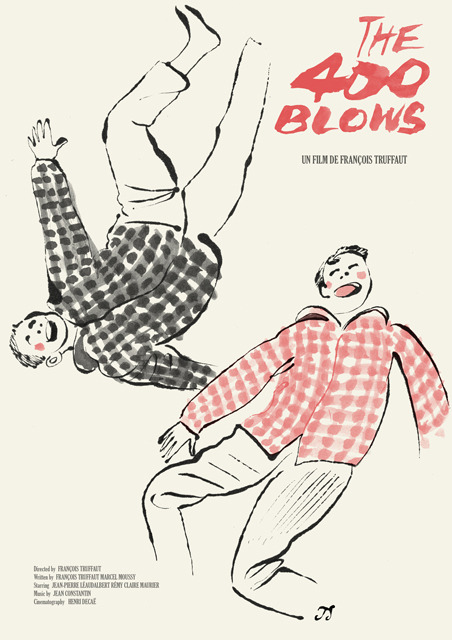 Some of your posters reimagine classic films (The 400 Blows, Stalker, Ran, Le Samourai, Rashomon being some of my favourites – I am a big fan of classic French and Japanese cinema). Do you think they will attract a new audience for classic cinema?
I used to be very pessimistic about that and guarded about my film love, but now I can see that through social media – the film twitter community I fell into is an amazing knowledgeable group and the posters are always a starting point of conversation – people that know and love the films can appreciate the specifics of the posters; to others, they are an incenitve to seek out a film they have heard about and a new poster can refresh or awaken that curiosity.

I have recently rewatched Claude Sautet’s “Classe tous risque”. And then I saw your film poster. And I thought it conveyed so well not only the story, but also that feeling you often get from Sautet’s films, indicating that his protagonists are always among us. I would like to ask you, although I know you probably get this question a lot, about your creative process. Where does it begin? Do you watch the film and try to understand the rhythm, structure, mood? Do you settle on an image or on an idea and bring your own self and imagination into the world of the film?
Oh yeah – that’s an old poster – I’ve made two or three versions for that great film – I went through a whole French crime phase in my teens. I always watch and know the film and its circumstances before I start, but it is very instinctive and I let my mood and the process decide the direction – that’s why there are often multiple versions; years later something else speaks to you. (I am always shocked when I hear designers proudly talk that they haven’t seen a film… that happens a lot now). 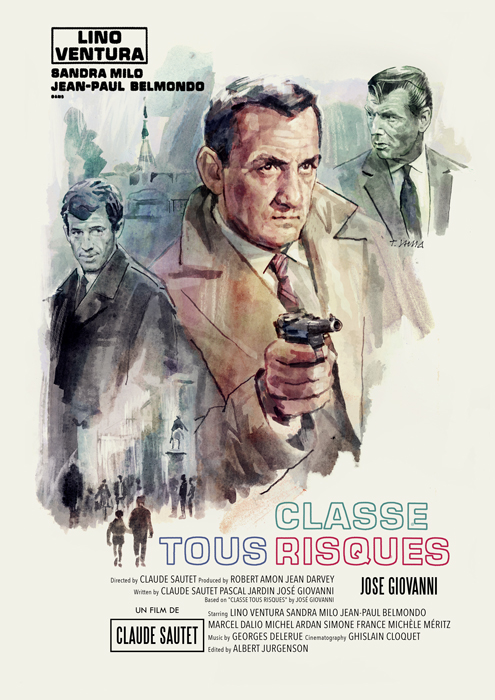 Speaking about French cinema, I keep coming back to your fantastic poster for Melville’s Le Samouraï. In the film, we are signaled Jef Costello’s fate from the very beginning of the movie. The silence. Him alone in the room. The bird singing in the cage. Symbols of complete solitude and imprisonment… in his own destiny. Melville makes great use of circumstantial symbolism, an element encountered in classic Japanese cinema. And I find your poster design captures that very essence of the film. And I gather from your work that you are passionate about Japanese cinema. What exactly drew you to Melville’s films? What about the Japanese cinema?
It’s exactly his awareness of the Japanese gangster films that stylistically surpass any others in the genre and his French spin on them. Le Samouraï blew me away when I saw it as a kid. There are a lot of fantastic posters for the film, but none of them pick up on the “Japonaiserie” that had been present in France since VanGogh and Matisse. But it can’t be done too directly so I tried to put it all in the very loosely written title and the style of the simple ink scroll with just the little bird outside the cage for people who know the significance.

The Japanese cinema holds the highest position in my love for movies and among all the countless masterpieces we still have only gotten to see a fraction of them. When I lived in Japan for a while, I used to go to the Video-store and see as much as I could – even without subtitles. It was always my dream to make a book showing the over 400 original posters I have made over the years. Hopefully this year I’ll be able to release my first book collecting all my Japanese posters.

Do you seek out inspiration for your design outside of the cinema world? Are there any unexpected sources of inspiration?
It can come from anywhere – nothing unexpected though – I love the old Venetian masters Tintoretto, Titian, Veronese, Bacon, Giacometti, Munch… all of whom have had significant influence on cinema. I’ve been collecting film scores for a long time – they are a good way to get into the mood very quickly – especially when the everyday chores make it hard to focus. 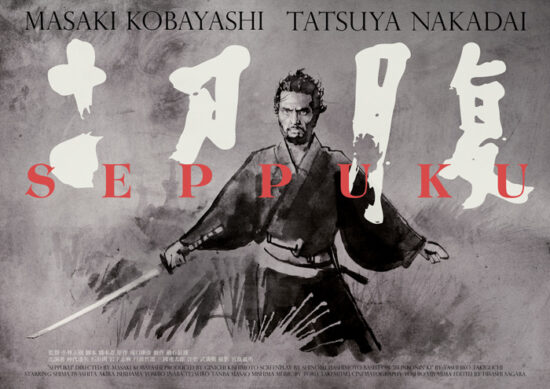 From my experience and from my talks with writers, I have learned that the cover of a book counts. Just as I do with books, I always pay attention to a DVD or Blu-ray cover art whenever I purchase a new release (I am a collector). And I am happy to see what Kino Lorber, Criterion Collection and the BFI are doing in this department. Does a DVD cover count? Could it bridge this gap between today’s audience and online streaming and watching films?
Yes – as we went from giant billboards to posters and now digital thumbnails, the specialised film-connoisseurs market is the last playing field. If you are sensitive to these things, bad, careless DVD covers, like with book covers, can ruin the aura of your library. These companies are doing a great job of adding and preserving a film culture of which the advertising artworks are a huge part – I always dream of an expansive museum dedicated only to movie art, where all the original paintings and sketches can be seen alongside the posters. The Museum Folkwang in Essen and the Cineteca di Bologna are doing a great job, but there should be an even bigger effort towards collecting and maintaining the originals. 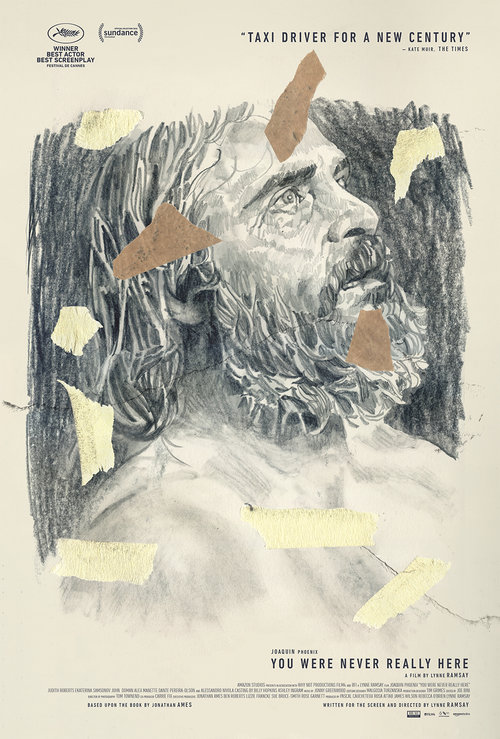 If you could choose one classic film to make the official poster art for back in the day, which one would it be?Fantastic question. So many come to mind – maybe Masaki Kobayashi’s Seppuku, although there are many incredible posters for that masterpiece. Recently I got pretty close to that – our company Alphaville (ed. note: the film poster design company Tony Stella has founded with illustrator Midnight Marauder) got commissioned by Film Movement with making the 50th anniversary poster for Sergio Corbucci’s Il grande silenzio for its first theatrical run in the US. A dream come true!

As for contemporary film posters, the poster you did in collaboration with Midnight Marauder for Lynne Ramsay’s You Were Never Really Here is one of those which truly stand out in my opinion. Could you name a few favourite film posters of this decade?
No real favourites since photography replaced the illustrations and the individual countries got streamlined to buy the same image. Today, the great designers to me are Midnight Marauder and Akiko Stehrenberger – his Knight of Cups (2015) and her Kiss of the Damned (2013) are modern favourites. 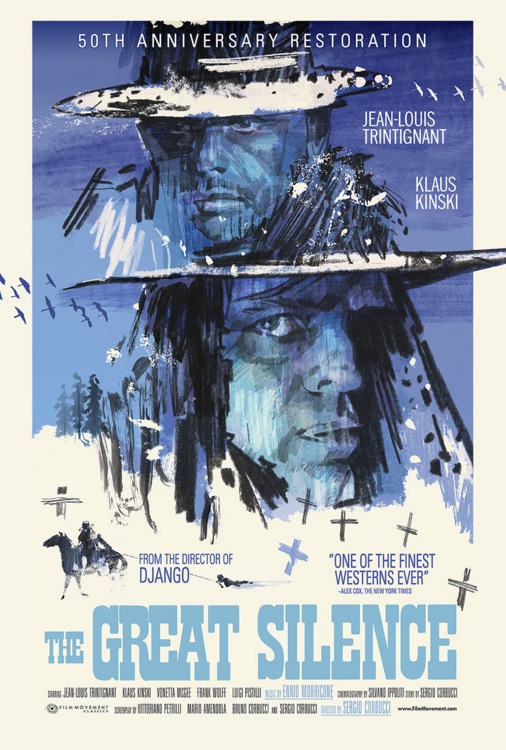 Note: All film posters are by Tony Stella, except You Were Never Really Here, which is a collaboration between Stella and Midnight Marauder.