In one of the first sequences of Kinji Fukasaku’s Battle Royale (Batoru rowaiaru, 2000), a group of boisterous pupils on a bus trip to the countryside arrive at a tunnel entrance: an appropriate place to anticipate the horror which awaits them when they emerge from the darkness at the other end. Stunned by gas, they wake up on a small island and are forced to fight each other to the death until there is a sole survivor.

Every year the government sends a school class into mortal combat in order to exact revenge on Japan’s rebellious young generation. The film depicts a society in which schools are deserted; pupils boycott lessons and attack their teachers, such as Kitano (actor-director Takeshi Kitano), with knives. On the island, Kitano is in command of this year’s “battle royale.” During the three-day fight for survival, his voice, transmitted all over the island by loudspeakers, informs those still alive of the names of their dead classmates, revealing again the cruelty of a political system for which the victims are only names and numbers. 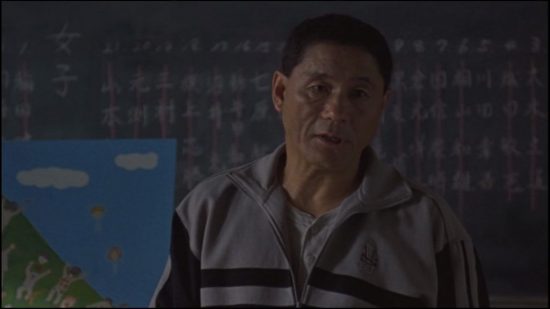 The film focuses on the adolescents and their different reactions to an extreme situation. Kiriyama (Masanobu Andô) is a volunteer who joined the group for the mere pleasure of killing. Mitsuko (Ko Shibasaki) has similar psychopathic traits, but her killings are also rooted in a strong survival instinct. Others become killers but are less eager to do so; for Shuya (Tatsuya Fujiwara), one of the central characters, killing is a last resort. His main objective is to protect Noriko (Aki Maeda), the girl he loves and who keeps her innocence intact.

The combat situation confronts the protagonists with their deepest fears and desires, revealing both their dark sides and their humanity. In the opening sequences, a flashback reveals that Shuya’s father hanged himself because he was unable to find employment; his dead body was discovered by a shocked Shuya. The latter and his generation are possessed by the feeling of having been betrayed by adults who are unable to offer them a future.

The same feeling (but transformed into a desire for revenge) motivates Kawada (Tarô Yamamoto), who won the “battle royale” three years ago. Ill-treated by the system, which sends him to the island a second time, he tries to subvert the existing power structure and manages to hack its electronic system, deactivating the explosive collars that the participants must wear around their necks. These collars not only foil any attempt to escape, but also ensure a sole survivor. 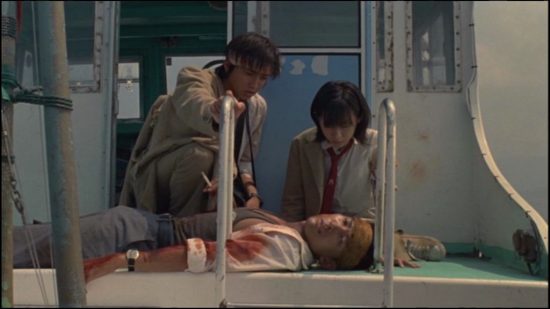 The scenes on the island are filmed in dark colours, and this shadowy landscape reflects Fukasaku’s brutal and amoral world. Human bodies and settings are plunged into a bluish light, which blurs their outlines and reinforces both the nightmarish atmosphere and the presence of killers and survivors in close proximity. Lighthearted music by Johann Strauss (father and son) creates an ironical counterpoint to the hellish situation, intensifying emotions and echoing Akira Kurosawa’s use of musical counterpoint in Drunken Angel (1948) and The Bad Sleep Well (1960).

The events on the island are the apotheosis of a society dominated by violence. The few shots of the outside world at the beginning and end reveal the omnipresence of armed soldiers and streets filled with garbage (a sign of the recession). The film is an anticipatory tale, but it clearly targets political corruption and the authoritarian Japanese educational system, notorious for its high suicide rate.

Fukasaku constantly connects past, present and future. A government that sacrifices the country’s young generation and the frequent mention of suicide as an ultimate gesture of obedience recall the Japanese military regime during World War II. The adults in the film, mainly Kitano – whose presence adds a strong ironical note – represent an eroded patriarchal system, emphasized by the fact that the teacher is not only ridiculed by his students, but also rejected by his own daughter. Reality television is also criticized through the setting, the element of competition, and the close monitoring of the participants.

However, the story is also a grim tale of initiation in which the entrance to the tunnel is the threshold to adulthood. Political criticism is paralleled by psychological exploration, which transforms the three days on the island into an inner journey. The fear expressed by the adults is a general fear of change, loss of control, and death. The pupils’ experiences in the island’s wilderness (the violence substitutes for sexuality), along with the awakening of their emotions (some of them experience love for the first time), reveal the anxieties of the “no-future generation” as well as a general fear of loss and of the unknown often associated with adulthood’s responsibilities. The battle on the island, which is contrasted with frequent flashbacks to a colourful and joyful basketball match, perverts a youthful game so that there is no escape.

When focusing on the group of adolescents, Fukasaku often keeps his camera at a distance, preventing easy identification with the young protagonists, of whom Shuya and Noriko are the central figures. Their solidarity, mutual loyalty, and empathy impress Kawada, who dies with a smile on his face after rescuing them. Once they have fled the island, Shuya and Noriko are outcasts in a society ruled by conformism, an attitude underlined by the fact that the adults (with the exception of the cynical Kitano) remain anonymous. 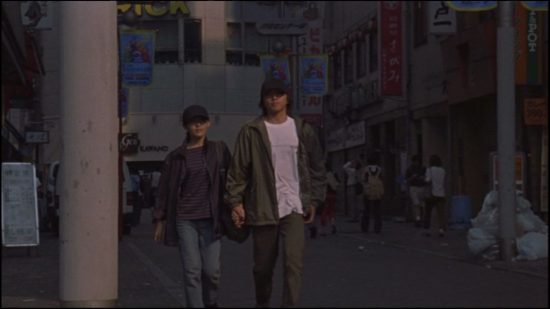 Unlike The Hunger Games (2012), Battle Royale avoids heroism and any feelings of triumph. By changing the rules of the game, the two surviving protagonists reject manipulation and free themselves from social conventions. The end of the film, with Shuya and Noriko permanently on the run and trying to survive in a world without joy, is rather skeptical about their future. However, it is Kitano who, in Noriko’s dream, offers a kind-of solution by stating that adults should perhaps behave like children more often.