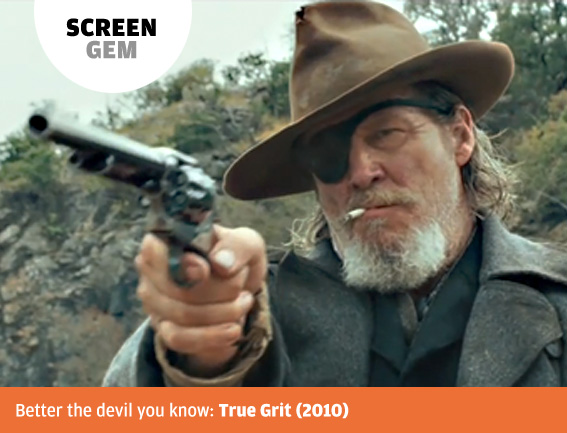 There is surely something of the War on Terror in the Coen brothers’ big screen version of the 1968 Charles Portis novel, True Grit. This enduring Western tale – already filmed, with John Wayne as US Marshal Reuben “Rooster” Cogburn, in 1969 – follows a manhunt in late 19th Century Arkansas and Oklahoma, a quest spurred on by an ethos that could perhaps be summed up as: “Our enemies will stay unpunished for their misdeeds if we do not pursue them to a place they believe we may not be willing to go.”

And one particular line contains something of the shock and awe of Desert Storm, when the one-eyed Cogburn (Jeff Bridges this time) says: “You go for a man hard enough and fast enough, he don’t have time to think about how many’s with him – he thinks about himself, and how he might get clear of that wrath that’s about to set down on him.”

Guns and their uses are key to the movie – when the bereaved young Mattie Ross (Hailee Steinfeld) is shown her late father’s effects, a Colt Dragoon pistol is prominent among them and she takes it as her own, with a tear in her eye and revenge in her heart.

Bridges’ Cogburn convinces as a brutal, pitiless killer – if you see him squint his one eye, and hear his guttural growl, you’re probably as good as dead already. But while his guns mercilessly cut down numerous villains, there are times when a shot serves as a warning, or a signal to help save a fallen comrade. 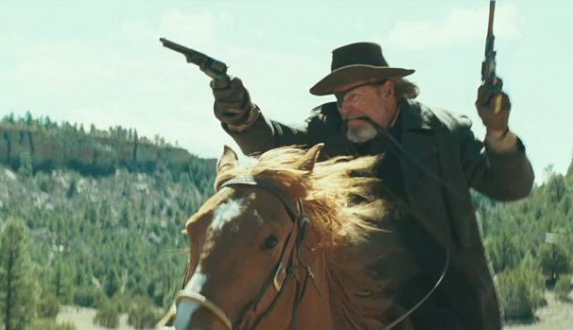 Rooster’s pair of Colt 1851 Navy revolvers – his “Navy Sixes” – come to the fore in his famous reins-in-teeth, one-man cavalry charge at chief villain “Lucky” Ned Pepper (Barry Pepper) and his motley crew – you know the moment, or you will when you hear the Marshal call: “Fill your hand, you sonofabitch!”. The 1851 Navy – with images of fighting ships engraved on the revolver’s cylinder – was used in the real Wild West by Wild Bill Hickok and Doc Holliday, among others.

For the record, Wayne’s Cogburn charged Ned & Co with a Colt pistol – a Single Action Army, the legendary “Peacemaker” – and a Winchester rifle – an 1892 Saddle Ring Carbine.

The 1969 True Grit, memorable but more sentimental, was directed by Henry Hathaway and presented the novel as a great adventure, an old-fashioned yarn. The Coens – writer-directors Joel and Ethan, makers of Fargo and No Country For Old Men – muster their superior film-making firepower and manage to convince it is more than that, perhaps even a Great American Novel.