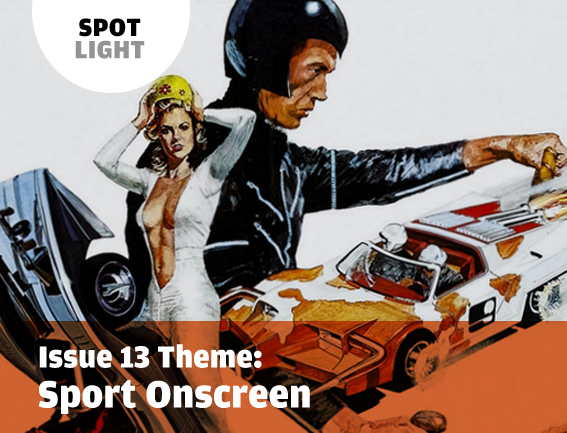 Replicating the intensity, passion, athleticism and thrilling immediacy of team sports and individual athletic skill on the big screen is no easy task, and many sports themed movies stick to a familiar tale of underdog triumphs and last minute victories. Capturing the spirit of sporting drama on film to draw audiences into an emotional response is doubly difficult when the sport in question is fictional.

A relatively recent phenomenon, the fictional sporting movie has its natural home in the science fiction genre, where the suspension of disbelief is intrinsic and the realms of the imagination are allowed to run riot. A common narrative theme running through the representations of both real and fictional sports onscreen has been the powerful and often corrupting influence wielded by the media, businessmen, politics and patriotism.

George Orwell’s provocative statement that ‘sport is war minus the shooting’ applies just as readily to the world of fictional competition where pride, glory and loyalty often come into violent conflict with Machiavellian forces, global politics and the pressures of fame. 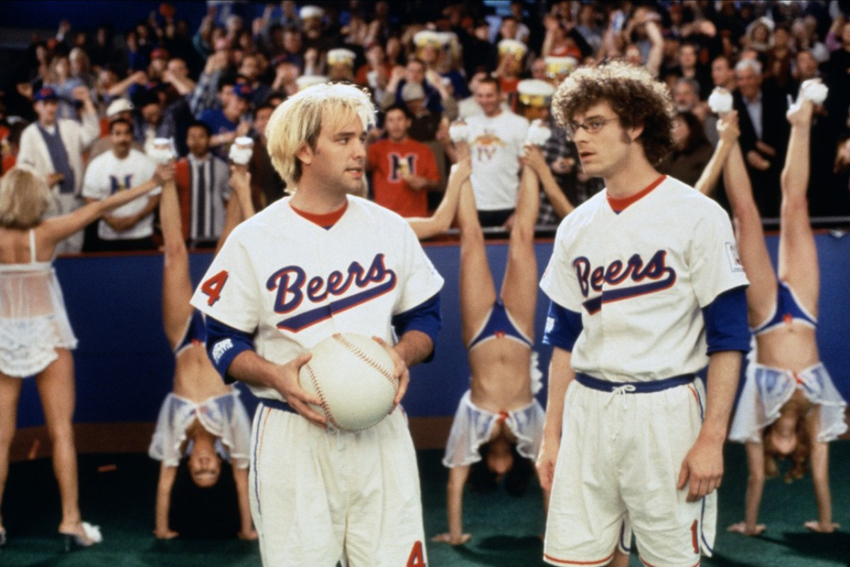 When David Zucker, of Airplane! (1980) and The Naked Gun: From the Files of Police Squad! (1988) fame, got together with the creators of South Park for an anarchic spoof of the sports movie genre, BASEketball was the suitably off kilter result. Coop (Trey Parker) and Remer (Matt Stone), two unemployed losers who once dreamt of being sporting heroes, invent a bastardised mix of Basketball and Baseball, which Zucker had dreamt up and played in reality, to be played in a driveway by even the least athletic Average Joe. Played over Baseball style innings, the players shoot from a standing position and reach different bases or score home runs depending on how far back they are from the basket. Added to this, opposing players can distract shooters, in a ploy known as the ‘psyche out’, in various offensive, obscene and unhygienic ways.

When billionaire Ted Denslow (Ernest Borgnine) sinks his cash into setting up a professional league Coop and Remer, the linchpins of the Milwaukee Beers team, are thrust into the limelight as BASEketball fever grips the nation. Studded with sports celebrity cameos and featuring a turn by Robert Vaughan as the unscrupulous owner of a rival team BASEketball is foul mouthed, scatological and ridiculous fun. Beneath the irreverence however is a pointed satirical streak taking pot-shots at the contemporary tainting of mass spectator sports and sporting values by inflated wages, player power, advertising, the celebrity obsessed media and the influence of wealthy investors.

The Salute of the Jugger (1989)
Director: David Peoples 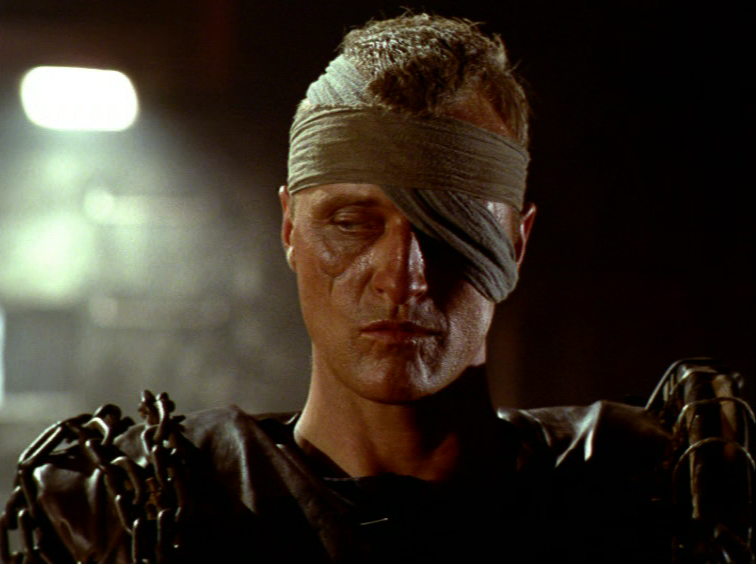 Screenwriter David Peoples, whose credits include Ridley Scott’s Blade Runner (1982),  and Terry Gilliam’s Twelve Monkeys (1995), sole directorial feature came in the shape of The Salute of the Jugger (1989). Released in the US as The Blood of Heroes, and with a cult cast list including Rutger Hauer, Joan Chen, Delroy Lindo and Vincent D’Onofrio, Jugger is a low budget, post-apocalyptic romp where the only source of entertainment left is the sport known as ‘The Game’. Resembling the gladiatorial combat witnessed in Mad Max: Beyond Thunderdome (George Miller, 1985) and the team sport of Rollerball (Norman Jewison,1975), ‘The Game’ rests on a dog’s skull being placed on an opposing teams stake for a winning score. The teams guard their stake with chains, pikes and staffs, using bloody and brutal force as their ‘quick’, the only one allowed to touch the skull, attempts to dodge and weave their way to victory.

Chen’s Kidda, a peasant girl from one of the dog-towns that litter the wastelands proves her talent as a ‘quick’ to Hauer’s disgraced former League of the Nine Cities player Sallow.
As the nomadic team move through the lawless territories racking up the victories Sallow is tempted by Kidda to test the their collective skill at the highest of levels. The ensuing challenge match between Sallow’s rag-tag team and the all powerful and opulent Red City’s players becomes a futuristic take on sporting glory, class divisions, loyalty and corruption. 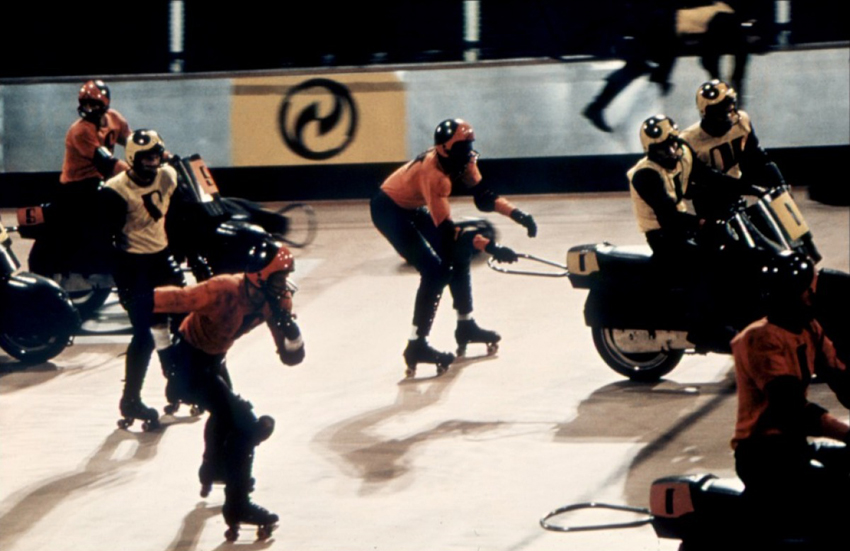 Jewison’s bona-fide cult classic, adapted by William Harrison from his own short story Roller Ball Murder, portrays a dystopian future in which mega-corporations control the world’s populace and warfare has been replaced by the sport of Rollerball, the new opium for the masses. This uber-macho version of Roller Derby is played on a banked circuit track by teams of ten –  three players on motorcycles and seven skaters –  and points are scored by depositing a solid steel ball in the opponents magnetic goal. Jonathan E (James Caan), the long standing star of the Energy Corporation’s Houston team, loves the game, but his popularity and increasing individualism is a cause of unrest to the ruling elite. In a world where freedom of thought and celebrity status is anathema to the powers that be Jonathan E’s sporting prowess and star quality threatens the status quo of collectivism and blind allegiance the game is supposed to represent.

The Realpolitiks of corporations and governments, the appeal of mass spectator sports, the cult of celebrity and the growing appetite in reality for violent imagery in films and on television are all touched on as the sport becomes increasingly bloody and the fans more frenzied in their adulation. Rollerball‘s influence on popular culture can be seen in many subsequent video games and films, such as Commodore 64’s Rocketball, Amiga’s Speedball and the tv movie Futuresport (Ernest Dickerson,1988). The Simpson‘s further embedded the film’s lasting legacy by making several references to Rollerball during the sixth season episode ‘Lisa on Ice’. 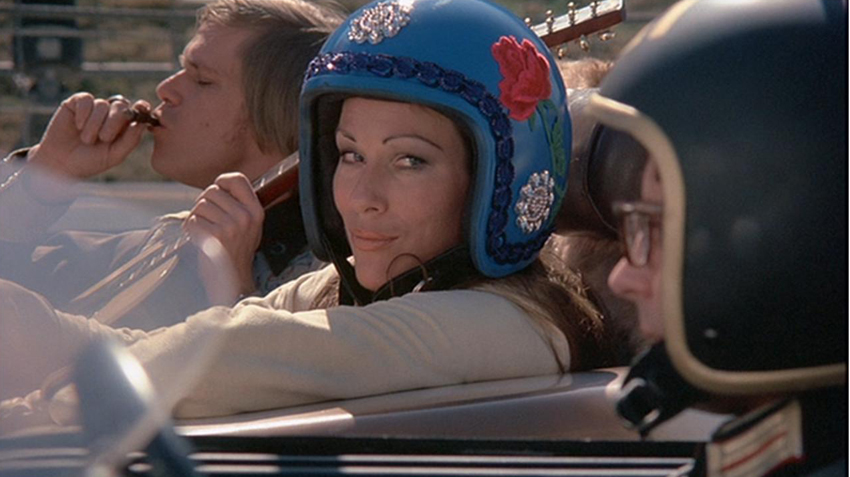 Released a couple of months prior to Norman Jewison’s Rollerball, the Roger Corman produced Death Race 2000, a similarly dystopian fantasy, features the high octane and ultra-violent Transcontinental Road Race. In keeping with much of the Corman stable’s output Bartel’s film is a low budget, over the top B-movie which bares further relation to Jewison’s movie. It’s depiction of a future in which the population is kept entertained and subdued by one dominant sport also focuses on a veteran sportsman, Frankenstein (David Carradine), whose popularity is both the main weapon of and potentially disruptive influence to the fascist police state ruled over by Mr. President (Sandy McCallum). Racing cross-country from New York to New Los Angeles the cars and their drivers, a hardcore live action version of the wacky racers, score points for speed and for running down and killing pedestrians. Displaying the comic book graphic violence that would later come to define the ‘video nasty’ genre, Death Race 2000 takes satirical swipes at American values and political corruption as Frankenstein is revealed to be a creation played by numerous drivers throughout the years and a resistance movement rises up to bring down Mr. President’s despotic regime.

Featuring an early performance by Sylvester Stallone as ‘Machine Gun’ Joe Viterbo, Bartel’s movie, the subject of a famous no star review by film critic Roger Ebert, spawned a comic book series, inspired many video games and ushered in a wave of even lower budget ‘death sports’ movies. 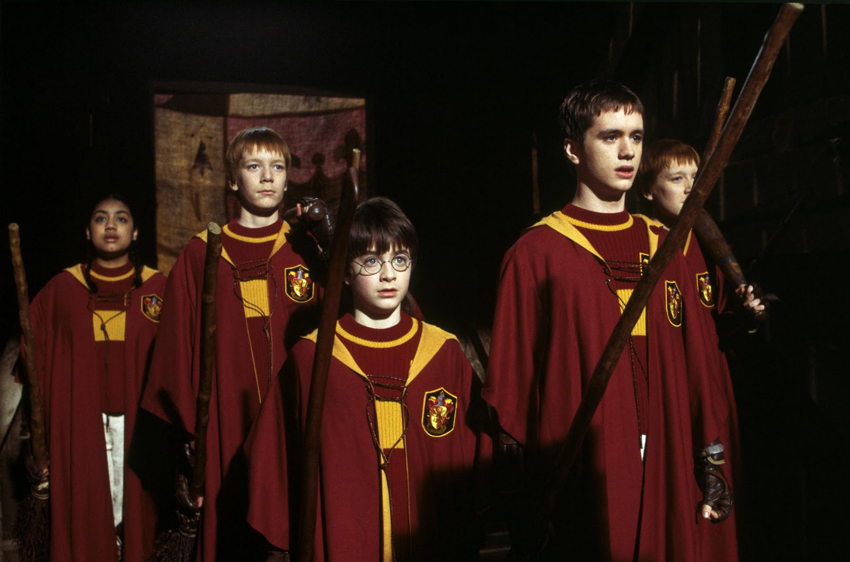 Thanks to the phenomenal cross generational literary and box office success of J.K. Rowling’s wizardly creation the most prominent fictional sport to appear on the big screen is Quidditch. Such is the impact of all things Potter related that Quidditch is now part of the cultural lexicon of our times, with even those averse to Rowling’s creation able to recognise what the word refers to. The semi-contact sport is played by teams of seven wizards and witches on flying broomsticks, with four balls (the quaffle, two bludgers and the elusive golden snitch) and six elevated hoop shaped goals. Played above a grassed, five hundred foot long pitch the fantasy sport reflects all the physical skill, emotional investment and mental toughness seen in real life athletic endeavour. Featuring in all but one of Potter’s adventures, Quidditch is to Rowling’s universe what football is to ours, with Harry’s position as his team’s ‘seeker’, the only player able to touch the golden snitch, being the equivalent to a Premier League team’s centre forward. The fast moving sport is played locally and regionally and at international level in the Quidditch World Cup, as seen in Harry Potter and the Goblet of Fire (Mike Newell, 2005).

In Chris Columbus’ adaptation of the first of Rowling’s novels an expertly executed and thrilling sequence centred around a Quidditch house match at Hogwarts is portrayed, and Harry’s sporting skill is later utilised in his capturing of a flying key during the quest to retrieve the philosopher’s stone.