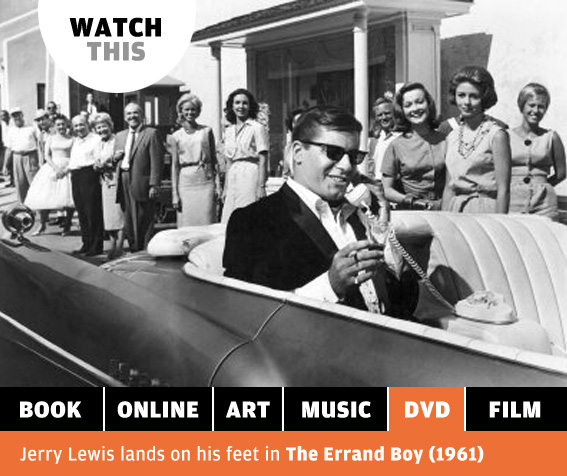 Like many comedians capable of bewitching us with their innocence, Andy Kaufmann being an excellent example, Jerry Lewis is easily bewitched by innocence even more pronounced than his own. This is never more evident onscreen than in one of the standout sequences in The Errand Boy, his classic – and uniquely Lewisian – look at the film business.

The eponymous errand boy, Lewis’s Morty Tashman, stumbles around a prop cupboard until a glove puppet he comes to call ‘The Little Clown’ draws his attention. He stares at it – lovingly, patiently and entirely without judgement – while it gives him a lollipop (which, naturally, he eats with the wrapper on) and pantomimes falling asleep on a miniature bed.

The entire sequence is, at the time, utterly inexplicable (and is only partly explicable after a later scene that ostensibly explains it) and yet it is moving, amusing and entirely fitting. It gives us the insights into Tashman’s character that would, in a less daring picture, be provided by a pre-fabricated romantic subplot or extended scenes of dull dialogue. As such, it is emblematic of a movie that is often staggeringly unusual.

The Errand Boy is misrepresented by the description ‘episodic’ – which has connotations of either a jigsaw narrative in which every piece will, by the end, be seen to seamlessly unite or of an under-planned and aimless mess, neither of which is to be found here. The film is a series of sketches, some simple (the back scratching business; the ‘wacka-do’ singing), some astonishingly sophisticated (the underwater episode; the radio that won’t quieten) but all brilliant.

The most brilliant of them all is the famous boardroom scene in which, sitting alone in a movie studio’s seat of power, Lewis smokes an enormous cigar and mimes to an upbeat burst of jazz music, turning its squealing notes into an imagined lecture to the imagined members of the studio’s board of directors. It is an example of comic precision equal – almost – to the best of Charlie Chaplin (indeed, the sequence should be seen as Lewis’s equivalent of Chaplin’s ‘Dance of The Bread Rolls’ in The Gold Rush) and it deserves to be revered as one of the great American movie scenes. Not to have seen it is to have missed one of the 20th Century cinema’s highpoints of hilarity.

Picking on Wikipedia entries is just about the most shameless bullying a magazine writer can commit, but it’s instructive to do so here. The world’s most oft-accessed encyclopaedia reports the plot of The Errand Boy as follows:

Paramutual Pictures decides that they need a spy to find out the inner workings of their studio. Morty Tashman (Jerry Lewis) is a paperhanger who happens to be working right outside their window. They decide that he is the man for the job and hire him on the spot. He bumbles his way through a series of misadventures, reporting everything back to the corporate executives.

We’re pulled into the film thinking it will be the story of an undercover boob’s hilarious spy operation but we never see one scene, or one sign, of Lewis’s character attempting to obtain, or report, information about the ways money is being lost on the Paramutual Pictures lot (this being, supposedly, his task). It’s illustrative of the enduring unconventionality of Lewis’s film that someone who has seen it recently (as we imagine the author of the Wikipedia article on it has), is compelled to re-imagine The Errand Boy with a conventional plot structure in order to describe it.

Like many of the most memorable – and, eventually, the most celebrated – works of art and entertainment (from Ulysses to Citizen Kane to Twin Peaks), The Errand Boy asks ‘must works in this medium be the way there are’? It is a film about films, set in and around them, and making us question what they are and what they mean. It does so broadly, with its content, and more specifically, with its structure, asking us what we want from a film comedy and what we need from one in order to enjoy it.

The simplest reason narrative conventions exist is that, without the form they give a film, movies can be frustrating for the audience. What makes The Errand Boy so extraordinary is that it is dramatically satisfying and – the only real test of comedy – very funny, but conforms to practically nothing of what we imagine a screen comedy will be.

Of course, filmmakers have been defying mainstream conventions ever since there were mainstream conventions to defy – and many of the world’s great films challenge, or even overturn, our ideas about filmic narrative – but they generally do so from the outskirts of cinema. Jerry Lewis did it from the middle of the mainstream, while making millions of dollars for a major studio and, for a few years at least, preserving his position as one of America’s most beloved and bankable stars. In The Errand Boy, Lewis is as outlandish and unconventional as David Lynch – and as funny as Buster Keaton.