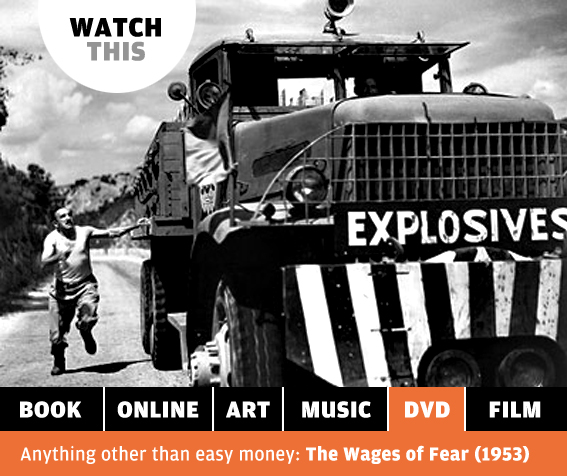 Four desperate men, two trucks packed with explosives, one suicidal mission – the tagline for the next Hollywood Blockbuster starring the latest action hero? Nope, it’s as far from that as it can get.

French, with a jazz crooner (Yves Montand) for a leading man, as concerned with inter-personal relationships as it is with action and made all the way back in 1953. Clouzot’s prototype Blockbuster concept is as stripped back as a road movie can get, the outline above sums it up in a nutshell, but from these bare bones and the off-beat elements used Clouzot laid down a marker for all future action/suspense movies.

In a one horse town deep in South America four destitute, disillusioned men, trapped by poverty, accept a near impossible mission to drive two trucks carrying nitroglycerine 300 miles to the site of a massive oil well fire so it can be used to help shore it up. Promised a large pay day that will free them from their personal predicaments the benefits of the deal outweigh the overriding danger – certain death if the highly unpredictable explosive is disturbed whilst being transported across substandard and pot hole riddled roads.
Clouzot wrings every conceivable ounce of tension from this set up as well as confounding expectations regarding the character’s along the way. As the rivalry between the two sets of drivers rises the dynamics between the respective pairs constantly shifts under the strain of the assignment. White knuckle set pieces pepper the narrative as, in his first serious role, Yves Montand’s Mario, a womanising chancer, and Charles Vanel’s Monsieur Jo, a brutish domineering gangster figure, undergo a startling transformation in their relationship. If you haven’t seen it I’m not going to spoil it, but it’s the attention given to the development of the characters amongst the brutal, stark and technically superior action sequences that raises The Wages of Fear to classic status.

Remade by William Friedkin in 1977 and given the unfathomable title ‘Sorcerer’, for me there’s only one director working today that would fit the bill for a contemporary take on Clouzot’s material – one Quentin Tarantino. Throwaway banter, relationship dynamics, outrageous premises and stunning set pieces – it’s all there, and if The Wages of Fear isn’t a Tarantino favourite, well then I’ll eat my words.

Appreciating the dedication you put into your website and
detailed information you present. It’s good to come across
a blog every once in a while that isn’t the
same out of date rehashed material. Great read! I’ve bookmarked
your site and I’m adding your RSS feeds to my Google account.