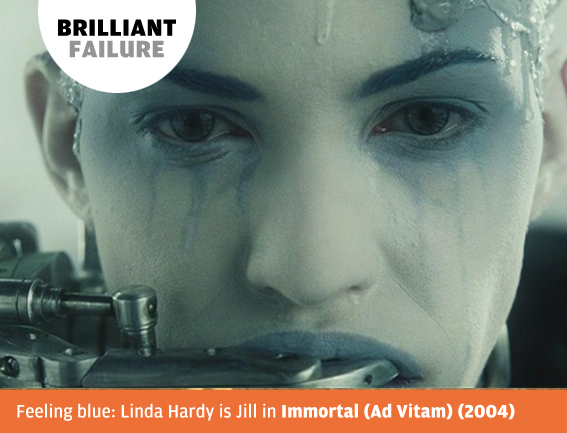 Celluloid gospel has it that Fritz Lang was inspired to make Metropolis when he first glimpsed the skyline of New York. Though in reality Lang was well into the planning stages for his dystopia, the skyscrapers and busy highways of New York without a doubt ground the film in reality. Three quarters of a century later, Metropolis is echoed in Immortal (ad vitam), adapted by Enki Bilal, from his own series of graphic novels.

No glorious technocracy this city, but a metropolis in disrepair, in which patched up people live a life of servitude to the Eugenics company. In this city the enigmatic, blue-haired Jill (Hardy) appears, arousing the interest of Eugenics scientist Elma (Rampling). Immediately she becomes the target of the Egyptian god Horus, who is trying to procreate before his time on Earth runs out. For this he infests the body of the revolutionary Nikopol (Kretschmann).

A summary doesn’t do Immortal justice, and makes it sound either chaotic or silly. In truth, it is neither. Enki Bilal’s New York, with all its disparate elements, is cohesive, with a history, a future and an existence outside of the frame. An Egyptian deity walking around is no stranger than some denizens of the real New York, and it is utterly believable that in the 30 years he spent on ice, Nikopol was deified by the underground, a martyr in the fight against Eugenics. In this context of immortality and mysticism, it is fitting that Horus is like so many pre-Christian gods: petty and horny, manipulating humans in a drama beyond their comprehension.

With Sky Captain, Casshern and Sin City, Bilal’s film was the first to be fully shot on a digital backlot. However, unlike these others, the story of Immortal is not subject to the style, as in Sky Captain, where function is made to follow form. Frank Miller’s Sin City comics were filmed panel by panel, with less than satisfactory results: comic book panels add up to form pages and eventually a book, while in a film each frame replaces the previous. Gravitas on the page so became tedium on the screen.

Bilal, who instigated, wrote and directed Immortal, made no such mistake, with the wise choice to take only a handful of characters and set pieces from the page, and realign them for the film. The music too, from such neo-mystical musicians as Sigur Ros and Goran Vejvoda, is perfectly judged, evoking atmosphere and emotion, rather than merely stoking adrenalin as so many sci-fi blockbuster soundtracks do. 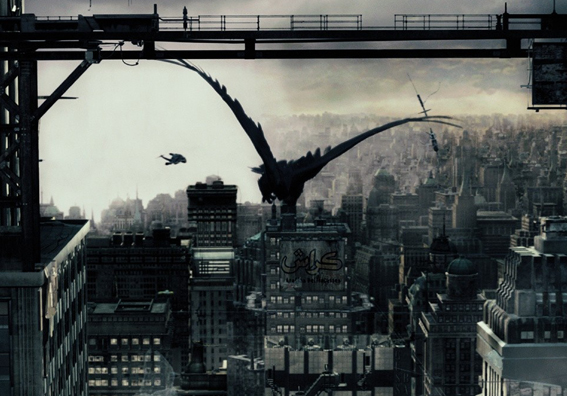 Yet, as with Miller and Sin City, storytelling genius in one medium does not necessarily carry over to another. Bilal too has underestimated the requirements of the different media. His dialogue may read well on paper, but suffers from its stilted formality, and it would have been to the film’s advantage had someone with a better grasp of the English language polished it up.

Another failing lies with the CGI, which was poor even for the time. While it is perfectly serviceable for the impressive and convincing cityscapes and interiors, the many computer generated cast members are stiff and lacking definition. Especially jarring when appearing opposite real actors, these soulless, low-rent Second Life avatars that we cannot care about severely undermine the tension between reality and artificiality which is one of the film’s major themes.

It seems the production sorely lacked someone with enough clout and vision to guard Bilal against making mistakes like these, and to curtail his tendency to undermine scenes of stylized beauty, depth and subtlety with notes of triteness. The end coda, in which Nikopol and an amnesiac Jill meet again in Paris, perhaps epitomizes this force of habit best: As they tentatively bond over the Baudelaire quotations that recur throughout the movie, ugly CGI intrudes in the shape of Horus Junior, bloodily dispatching a dove and then nodding at the camera.

Immortal is that rare occurrence – a movie that doesn’t merely entertain but dares to make you think and, more so, feel. It is also a film that you love to see again, but that leaves you dissatisfied afterwards. However, by the grace of its digital backlot origins, with some editing of dialogue and the replacement of the CGI bots, Immortal could yet be fixed.

The Big Picture Magazine Issue 3: Back to the Future (Free download of the complete issue from the Downloads section of the website)

Review by Angeline B. Adams and Remco van Straten