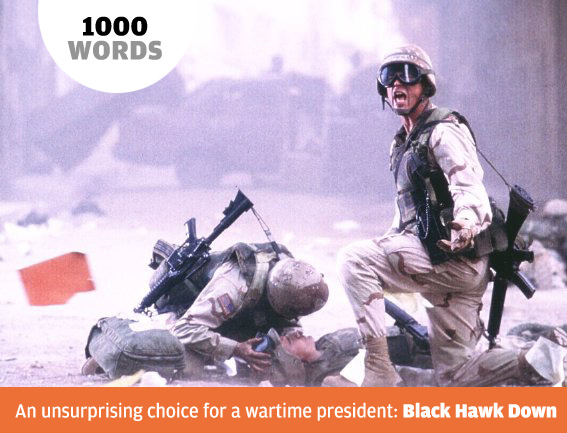 Moats and duck islands aside, we’ve grown used to the personal tastes of our political lords and masters ostensibly being determined for public consumption by focus groups so as to iron out any possible idiosyncratic and potentially unpopular cultural choice that they might actually make. But when it comes to film what has really had the world’s leaders weeping into their pick-n-mix down the years?

It’s widely recorded that Churchill’s favoured flick was the morale-boosting Alexander Korda movie Lady Hamilton (known as That Hamilton Woman in the States, 1941), in which Vivien Leigh and Laurence Olivier enact the ill-fated romance of Lord Nelson and Emma Hamilton. In H.V. Morton’s ‘Atlantic Meeting – an Account of Mr. Churchill’s Voyage in H.M. S. Prince of Wales in August 1941′ Winnie was reported to have requested a screening on board. As the film began, apparently, Churchill stopped his usual talking and, it was noticed, became more and more absorbed, withdrawing into himself. At the end, Churchill was seen to ‘weep openly and without shame’ at Nelson’s death scene.

Depending on which source you believe, when Hitler had the boys over for beers and a movie it had to be either Henry Hathaway’s 1935 adventure film The Lives Of A Bengal Lancer (in which the evil rebel chieftain Mohammed Khan coins the phrase ‘we have ways of making men talk’ and proceeds to torture his captives) or Cooper and Schoedsack’s 1933 celluloid landmark King Kong (in which a giant ape scales the Empire State Building, breaking off only to annex the Sudetenland). Others suggest that Der Fuhrer had a penchant for Walt Disney features. Indeed William Hakvaag, director of the Lofoten War Museum in Norway claims to possess coloured cartoons of the characters Bashful and Doc from the 1937 Disney film Snow White and the Seven Dwarfs, which were signed A.H., and an unsigned sketch of Pinocchio.
In the run-up to the 2008 US Presidential Election, when Entertainment Weekly grilled the candidates on popular culture, Republican contender John McCain displayed a similar liking for Disney, his favourites being Bambi (1942) – ‘When his mother was killed. Oh, yeah, I cried’ – plus also Elia Kazan’s Viva Zapata! (1952). The eventual winner and current Commander-in-Chief Barack Obama considered his top movie in the same questionnaire to be Born Free (1966), although around the same time his Facebook profile listed Casablanca (1942), The Godfather I (1972) and II (1974), Lawrence of Arabia (1962) and One Flew Over the Cuckoo’s Nest (1975) as his personal preferences, a choice which while excellent has the feel of a committee rubber stamp about it. Incidentally it’s believed that the Godfather films were also prized among Saddam Hussein’s DVD library. What a shame that these two world leaders won’t now have a chance to chew the fat over the Gordon Willis cinematography or the presence of oranges as a signifier of impending death.
As for previous presidents, JFK loved the spectacle of Spartacus (1960), so much so he once allegedly snuck out with Secret Service agents in tow to catch a late night screening of a 70mm print in downtown Washington. Nixon was completely consumed and obsessed by Patton (1970) a slab of silver screen gung ho which many liberal critics suggest he drew upon as a way to stiffen his resolve to invade Cambodia. Not surprisingly he was allergic to any film containing the word ‘Pakula’ in the credits. Carter came closest to serious cinephilia; nearly 500 films were screened in the White House during his term of office, including Midnight Cowboy (1969) and Alan J. Pakula’s All The President’s Men (1976) just two days after his inauguration. Reagan watched films more often than not at his Camp David retreat, citing It’s A Wonderful Life (1946) as his number one. When pushed to name the top film that he himself starred in the staunch McCarthyite usually plumped for Hellcats Of The Navy (1957), the screenplay for which was co-authored by one Raymond T. Marcus, who was in fact blacklisted writer Bernard Gordon.
Clinton often championed contemporary works such Fight Club (1999) and American Beauty (2000) but his favorite was High Noon (1952), a film he saw no less than twenty times. ‘It’s a movie about courage in the face of fear and the guy doing what he thought was right in spite of the fact that it could cost him everything,’ Clinton once told CBS’s Dan Rather. George Bush Senior seemed to pass on movies but Dubya made up for it, screening Saving Private Ryan (1998) and Black Hawk Down (2001) to his top level military people as a lesson in combat tactics but showing his softer side when fessing up to Field Of Dreams (1989) as his all-time favourite.
Talking of nuke-wielding maniacs, North Korea’s ‘Dear Leader’ Kim Jong-il, when not loving anything with Elizabeth Taylor in, can be found kidnapping leading South Korean directors and forcing them to create a reworking of his favourite film Godzilla. The result: Pulgasari directed in 1985 by Shin Sang-ok. The only way was up for Shin after this bizarre movie-making at gunpoint experience; he moved to the US in the 1990s and worked under the pseudonym Simon Sheen, directing 3 Ninjas Knuckle Up and working as an executive producer for 3 Ninjas Kick Back and 3 Ninjas: High Noon at Mega Mountain, the latter starring Hulk Hogan.
Closer to home, Thatcher’s top film was never revealed, but then the systematic demolition of the British film industry that took place during the 1980s rather suggests that cinema was not her favourite creative medium. Major adored the somewhat overlooked Jacques Tourneur-directed swashbuckler The Flame and the Arrow (1950). When the question was asked at a Blair Downing Street press conference an officer bristled ‘We have a regular line, which is that the prime minister doesn’t have a favourite film.’ More recently Brown has come out as an Indiana Jones fan while Cameron tends towards James Bond. Only next year’s blockbuster election will determine if the bullwhip or the Walther PPK wins out.