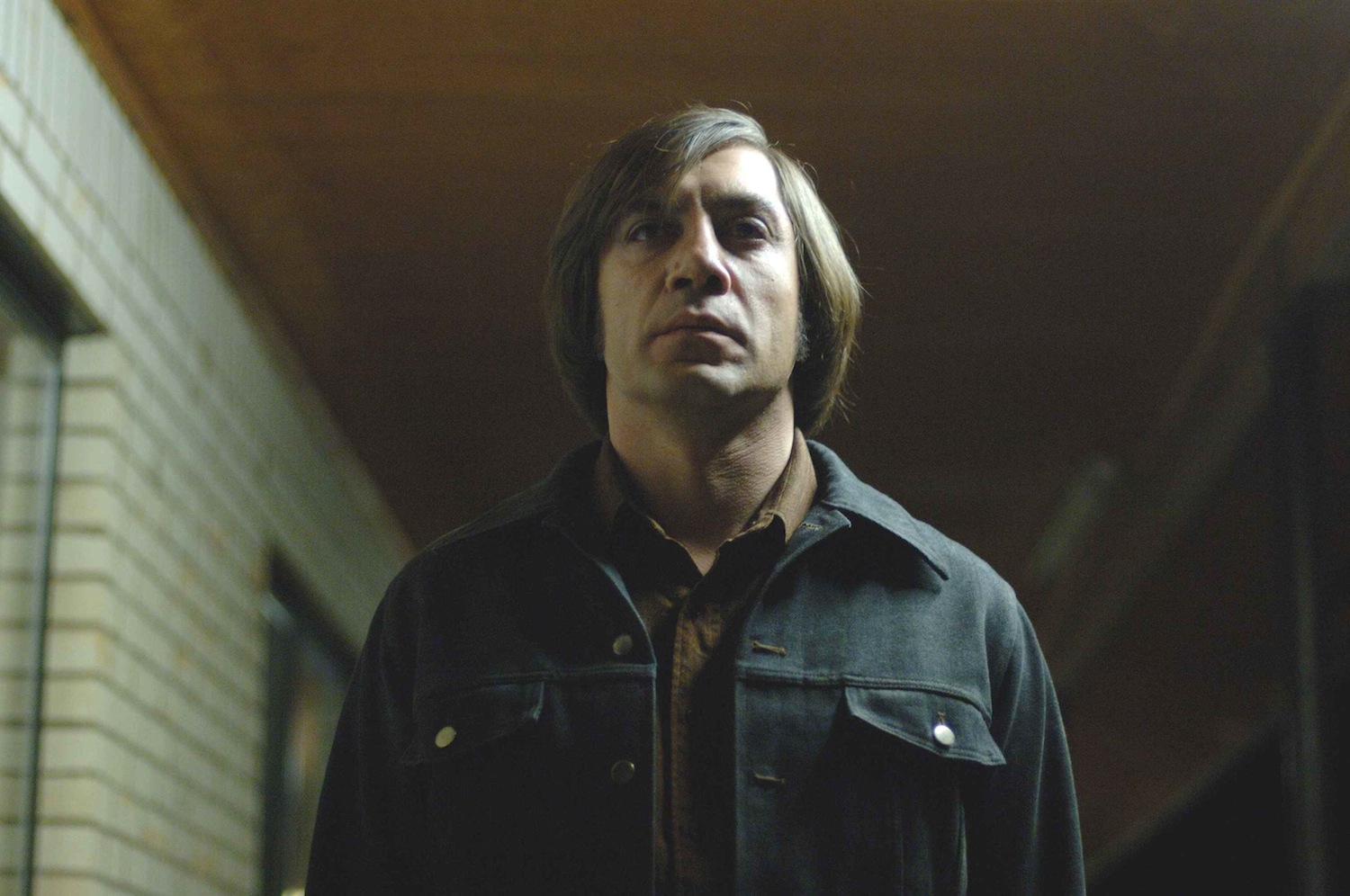 Anton Chigurh (Javier Bardem) has become one of the most iconic bad guys in cinema history.  With his penchant for quiet weaponry and disquieting conversation, the character takes on a mythic quality that reads to both the audience and the inhabitants of the film as an unstoppable force of evil, an angel of death, or, perhaps, as Lleweleyn Moss (Josh Brolin) questions after having been wounded from battle with the fellow Vietnam vet: “the ultimate badass?”

Visually, we are introduced to both Chigurh and Moss through their violence. In the introductory sequence for Moss, we see him sniping antelope from a distance, tracking his prey, and ultimately coming across the “drug deal gone bad” that is the narrative catalyst for the film (like Llewelen’s ultimate demise, a conflict of violence we are slyly denied).  What the Coens show us about Moss in this sequence is almost entirely centered around his nature as a soldier.

The four frames I want to display here occur much later in the film, showing us Chigurh in a motel room, tending to the gunshot wound inflicted by Moss in their confrontation. This scene seems to me the “flipside” of Moss’s opening sequence, but reveals something about Chigurh that is even more unsettling, heartbreaking even. Like the way in which Moss’s opening sequence may be undervalued as simple “rising action,” the sequence of Chigurh, alone, shedding his distinctive outfit (a wonderfully designed, slightly off attempt at “passing”) and dressing his wounds may seem one of the most inconsequential sequences of the film; merely connective tissue designed to offset the climax to come.

Of course, the climactic confrontation never does come. Or, rather, it has already happened. And, as with the great risk of the final sequence in the film, where the Coens usurp all aspects of Story for Character, asking us to settle on the dream narrative of Ed Tom Bell (Tommy Lee Jones)–to care about this aging, essentially ineffective witness to the violence of Chigurh–it is in this motel room that we are asked most succinctly to consider and care for Chigurh.

Theses frames show us the trained gestures of Chigurh, and the way in which they play against his equally ingrained and subtle murderous gestures. Unlike Moss’s earlier, messy attempts to clean his wounds at he and Carla Jean’s trailer (or, John Rambo’s macho suturing of his own wounds in First Blood), Chigurh’s ability to tend to himself is not only more competent, but suggests the skill of a former medic. This reading begins with the previous scene of Chigurh’s effortless looting of the “Mike Voss” Pharmacy, but becomes deeply revealing through the skill with which he creates an iodine wash bottle, and then sterilizes his tweezers to remove the buckshot from his leg.

Chigurh then dispenses the lids of the syringe and anesthetic with familiarity, ease, and urgency; the frame holding both this telling gesture and perhaps the most vital element of his discarded costume:  his cowboy boots. Finally, as Chigurh flicks the syringe–again, a  physical action that Bardem assures us is as second nature to him as the flick of a switch–a look comes across Chigurh’s face that we have not seen before. What we see in this fleeting moment is the compassion of a healer, an idea that makes Chigurh even more terrifying in the final analysis. 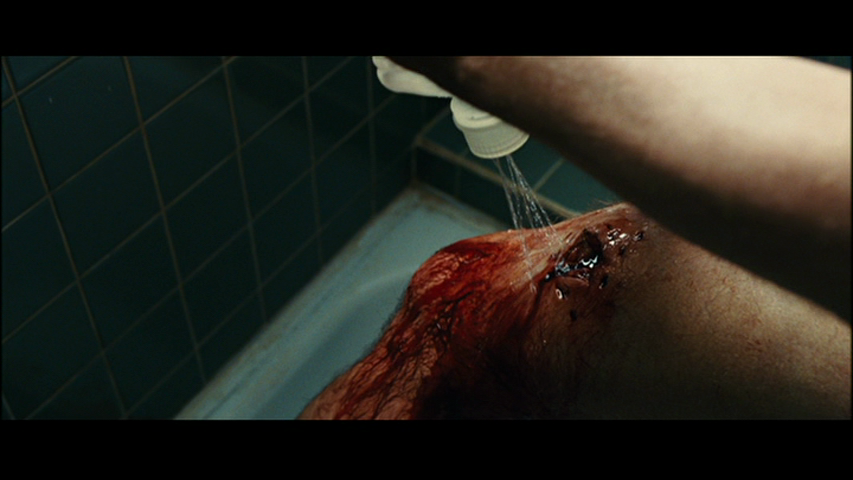 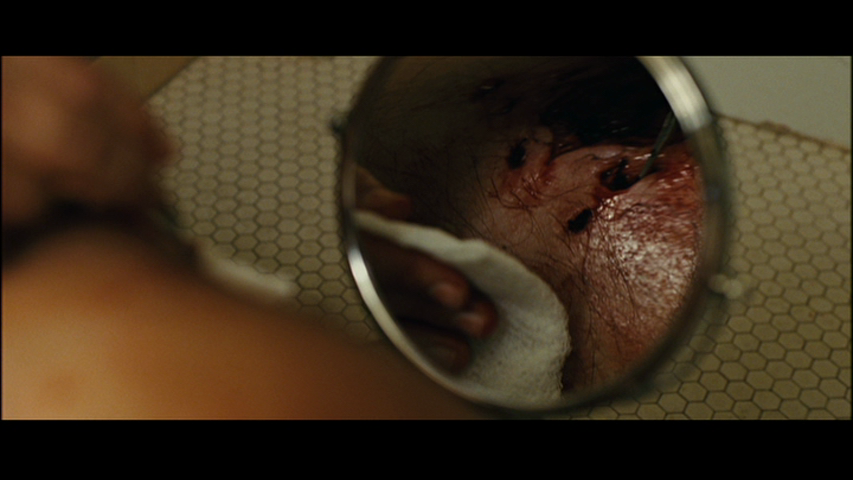 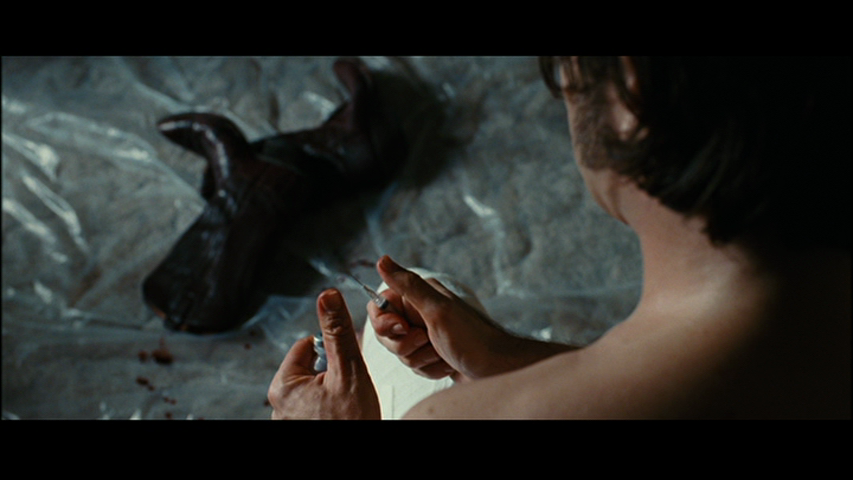 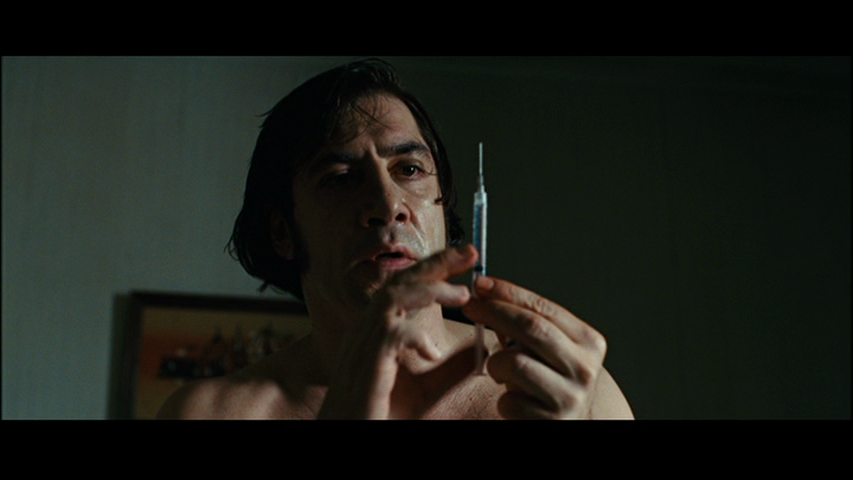 Call it Noir, Western, or Dark Comedy; what gives No Country For Old Men an unprecedented weight in the Coen’s filmography is the way in which it emerges, quietly, as a film about men who are the products of Vietnam.