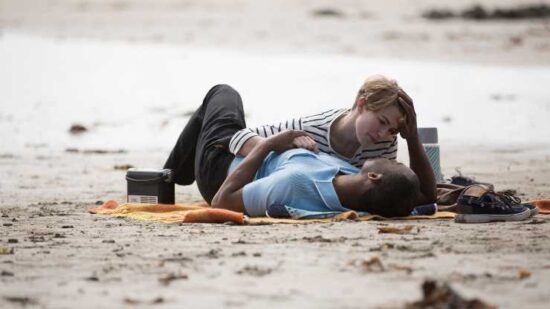 There’s that inevitable moment during any relationship in which you glimpse the real person underneath the idealized portrait you’ve created. It could be a small thing – a turn of phrase, a glance – which makes you realize they have a past, that you don’t (indeed, can’t) know everything about them. Justin John Doherty’s Wilderness (2017) is about such small revelations. It’s about, as one of its lovers pointedly observes, “what comes after besotted.”

In the beginning, Alice (Katharine Davenport) and John (James Barnes) are deep in the besotted stage. And it’s easy to see why. The film’s dynamic, wordless opening scene – composed entirely of close-ups and propulsive music – captures their first meeting in a smoky ‘60s jazz club. This sequence, like much of the film, is bright, sexy, and light on its feet. After seeing John perform, Alice runs out the back entrance to catch him before he leaves. The look they share says it all. We then jump to the couple – presumably some months into the relationship – on their way to a weekend excursion to a seaside cottage.

The trip quickly goes downhill when a neighbor interrupts the two during an intimate moment on the beach. The man makes no qualms about showing his disgust toward a black man and white woman kissing on a stretch of land which he claims to “own.” Later, when they visit John’s old friend/ex-bandmate Charlie (Sebastian Badarau) and his wife Francis (Bean Downes), Alice has a few too many drinks and hits a nerve when she comments on Francis’ obvious loneliness and boredom. “I’ve never seen that side of you before,” John later comments. “You’ve never seen any side of me,” Alice clarifies.

Much of the rest of the film is a duet (and occasional duel) of sorts between John and Alice, as they discover – and probe, sometimes maliciously – one another’s vulnerabilities. They fight, make up, have sex, and fight again. They talk about their feelings, and (a bit too often) their feelings about those feelings. And, in perhaps the film’s best sequence, they find themselves trapped on a corner of rocky beach during high tide; with nowhere to go and little else to do, this is when they really let each other have it.

Though lushly shot and suffused with beautiful music, Wilderness hinges most on Davenport and Barnes’ chemistry and screenwriter Neil Fox’s dialogue, and it is largely successful on both fronts. We feel John’s pain when Alice cuttingly advises him to “be an adult, and live in your confusion” and Alice’s impatience when John moans that he’s “talked so much, and said nothing.” And yet we emerge from Wilderness not exasperated but invigorated, Alice’s closing lines reminding us to embrace love’s messy ambiguities.