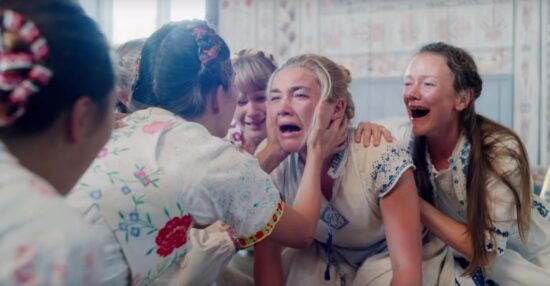 If you hated Hereditary (2018), you’re likely to hate Ari Aster’s sophomore film, Midsommar (2019), too. Even if you appreciate or even love Hereditary, there’s still a good 50/50 chance you’ll come out of Midsommar feeling disgusted, bored or a bit of both.

Midsommar follows Dani Ardor (Florence Pugh) who, after a family tragedy, tags along with her boyfriend Christian and his mates Mark, Josh and Pelle to Pelle’s home in Sweden. Far from big cities and even small towns, Pelle’s home village is the tiny community of Hårga. They are jolly people, welcoming the Americans with open arms, and are also strangely pro-drugs. The visitors are in luck; their 9-day midsummer celebrations are about to begin and they get to witness them in all their bloody glory.

With Midsommar, Ari Aster proves again to be a divisive filmmaker. The most common complaint over Midsommar will undoubtedly be that it is too long and too little happens, and these complaints are entirely valid and true. There’s barely any plot to describe, but Midsommar thrives on its visuals and performances alone. The film transcends genre and narrative by becoming a viscerally personal cinematic experience.

The Haxan Cloak’s dreamy score elevates the action on screen even further with its quiet, unobtrusive melodies that reflect the descent of Dani’s mental state. Cinematographer Pawel Pogorzelski cloaks the Hårga community in overexposed pale yellow and blue hues. Pay attention to the production design; Henrik Svensson and art director Richard T. Olson sprinkle clues and history throughout the film, making it a rich and rewarding experience to spot these references. 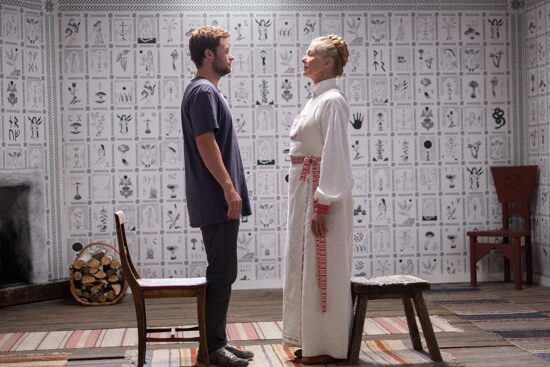 Aster portrays grief, specifically female grief, on screen remarkably convincingly. Pugh shines in her role as Dani. Dani is a difficult character, full of flaws and insecurities, to the point that they become irritating and enraging. Pugh brings out Dani’s humanity, reminding us that we are observing a very broken human being, constantly negotiating her own sense of self-worth and her place in her friend group. The film might be horrific, but it doesn’t fit neatly into the horror genre. Instead, it blends genres and is ultimately more about a painful breakup and family rather than the awful things Dani is put through. To watch Midsommar through the lens of a horror film will not do it justice.

Unsurprisingly, Midsommar is violent, but that’s not what I remember from it now, days later. I don’t remember the gore or the shocks, but the guttural screams and moans Dani lets out when facing tragedy. It’s not the disturbing imagery that now keeps me up at night, but the unescapable feeling of familiarity when observing a dying, toxic relationship and the relief of finally escaping one. In Hårga, grief, pain and pleasure are all communal, shared experiences. If one of them is in pain, the whole village withers in anguish. It’s powerful, but the film defies to be explained, or indeed understood, simply and completely. This is a film that requires, and rewards, multiple viewings.