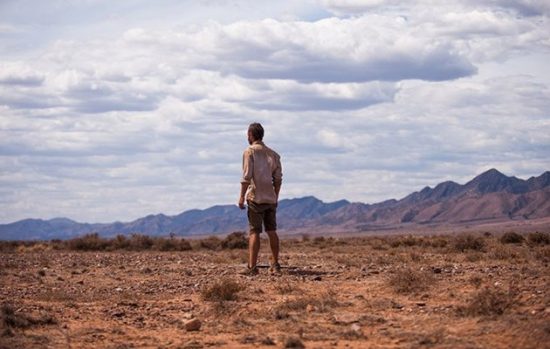 The second feature by director David Michôd has been described as a road movie, and certainly all of the action takes place in the small towns and scrubland along a tarmac corridor that marks human impact on the stark landscape.

Guy Pearce’s character does not give his name; he’s known only as The Rover. After three carjackers leave him bloodied and unconscious at the side of the road, we follow him through unsettling hostility and violence on his journey to find them again.

Every conversation becomes confrontation as demand meets demand. Negotiation is forgotten when life is this gruelling. This is why the road itself is so important: it enables movement: anything that stops, dies. The Rover must keep moving, generating tension with every mile travelled as we are left wondering, fearing what might threaten him next, however capable and resourceful he proves himself to be.

There is a sparse speculative realism to this work of dystopian cinema. A number of technical elements come together to maintain tension through an unsettling exposure to a hostile landscape. Many of the characters in this film live solitary lives, existing at the edge of life ten years after the socio-economic McGuffin referred to only as The Collapse.

We assume the economy has failed, and probably the climate as well. The landscape of The Rover is a synecdoche for what we assume is happening globally, making every personal struggle a paradox: a fight for survival in a world that has already died.

Ideas about multiculturalism reminiscent of more classically sci-fi films such as Blade Runner or Dredd find their way into this film, which mixes Autralian outback grit with a US military presence, and South Asian communities existing in pockets of the desert where food, sex, fuel and guns are the only currencies.

The melting pot of cultures creates tension exacerbated by the heat and arid landscape. These wider societal threats are compounded by the hostility of the road and lack of resources, but brought together for Pearce’s character most palpably in the moment where an unknown sadness bubbles to the surface. This is The Rover’s wound, his secret, and the seat of an empathic relationship between the audience and the dishevelled protagonist.

The unknown sadness manifests itself whenever The Rover engages in conversation. As he moves along the road, we intuitively know that he will go to any length to retrieve his old car, and complete whatever task he begun before the opening scene.

The film’s potency lies in how this unknown sadness is handled. It functions on many levels: from the assumed slow torture of living the kind of life we see on screen, through the personal narrative The Rover eventually concedes after his arrest, to the final devastating scene in which all hostility is lifted to unveil a moment of subtle, wordless sensitivity in the vast and uncompromising tracts of the Outback.