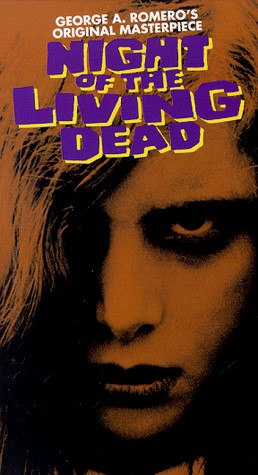 Before I saw any of George A. Romero’s seminal Night of the Living Dead, it already terrified me. This preemptive fear was caused by a VHS cover that has remained burned in my memory ever since I first laid eyes upon it as a child.

One of my favorite childhood activities was perusing the Styrofoam-filled tape covers at Palmer Video, my family’s designated video rental store. These miniature posters often interested me more than the actual films, which were always sealed in mud brown, plastic cases. Although Child’s Play (1988) was the first horror film I actually rented from the store (I didn’t watch the whole thing until years later, thanks to my sister’s exaggerated reenactments of Chucky’s exploits), Romero’s debut was the most memorable video on display.

The cover itself is cheap, simple, and shockingly effective, much like the film itself. A young girl (the zombified daughter in the basement, it turns out) stares straight at the viewer, her right eye concealed by matted hair, her left smeared with black makeup, her frowning lips equally dark and lifeless. I had no idea what the movie was about, but the girl’s expressionless void of a stare scared the hell out of me.

When I asked my mother to rent the strange video, she looked at the cover with distaste and said, “You don’t want to see that.” I had to see it. When I finally watched it, years later, I was not disappointed. Night of the Living Dead showed me that horror can be about a lot more than blood and guts; that it can address race, gender, politics, and other topics usually reserved for “serious” films.

It inevitably led me to 1978’s excellent Dawn of the Dead (the first scary movie to make me feel physically ill), whose score by Goblin guided me to Argento’s Suspiria. The list goes on. Although The Criterion Collection recently (and rightfully) issued a definitive edition of Night of the Living Dead, accompanied by some beautiful cover art, I still believe nothing beats the stark simplicity of that crummy VHS case.