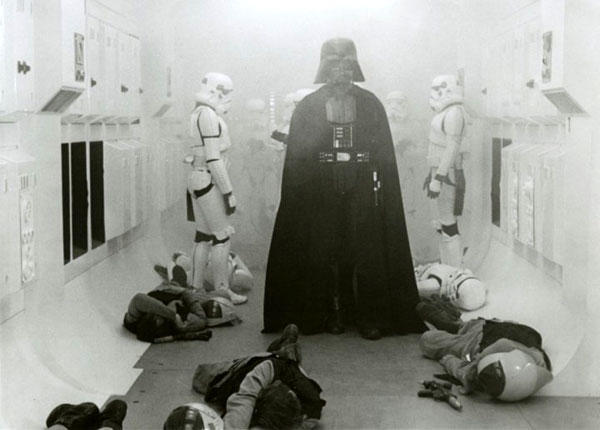 So there I was, standing in line, surrounded by a Sith Lord, a space rebel and a slave girl. I know this sounds like the set-up to some bad joke but it’s true. And to be honest, I felt a little underdressed rocking some cargo shorts, an Avengers T-shirt and a Red Sox cap. I had this notion that the people were judging me more for not being a part of their universe. But I guess that’s what happens when you venture out on the annual Comic Book Day and engulf yourself with the likes of Star Wars and comic book fans. Heck, even my girlfriend was smart about the situation; she wore her red Calvin and Hobbes as Han Solo and Chewbacca shirt.

When discussing fashion inspired by the first episode of the saga, we must not forget the crowning achievement of fashion in the Star Wars universe: Princess Leia in A New Hope. To make this tough space princess stand out from her unrevealing white gown, George Lucas and the creators gave Leia two cinnamon buns for hair on each side of actress Carrie Fisher’s head. This allowed Leia to stand out as an icon as she stood her ground with the boys whilst they traversed the galaxy. You can’t dress up as Leia without those buns in your hair, ladies.

Well, I may be getting ahead of myself. You can dress like Leia without buns if you want to get a little bit skimpier. A friend of mine, a fellow life-long Star Wars enthusiast, once stated that ‘slave Leia is every man’s fantasy in the history of forever’. Such an exaggerated statement has more than a grain of truth in it, at least when it comes to those who love Star Wars. Leia’s slave outfit must have blown men’s minds back in the 1980s, probably some females’ too. While people walked out of The Empire Strikes Back saying, ‘Man, I cannot believe that Darth Vader is Luke Skywalker’s father’, a lot of men must have come out of Return of the Jedi saying ‘I cannot wait to see that again and again and again’. They may have given each other a chest bump or two as well. What makes this even more culturally incredible is that after all these years, this kind of outfit can make men physically shrug off their girlfriends to check out another woman dressed in a slave Leia costume. Men, surely, cannot be proud of themselves at that moment, but that’s exactly my point; men are slaves to the slave outfit. And whether we like it or not, it goes a long way in considering the fashion influence of the Star Wars saga. It is because of such reactions, mostly by men, that the slave outfit remains popular among women, not just for Halloween but for other occasions of dress-up as well, as further illustrated in the discussion of Star Wars and gender in Chapter 6.

Okay, enough about Princess Leia and all her gloriousness; I want to play a game with you. When one talks about fashion in a movie about space pirates and mystic knights, you would think that the costumes would be tough and/or classy, like James Bond’s classic suit in any of the films, Peter Fonda’s black American jacket in Easy Rider (Hopper, 1969), right? Onto the game, I’ll describe an outfit and you try to guess who it belongs to. Our example sports feathered hair with a tight, low-cut, buttoned-down white shirt that exposes his chest hair, covered by a black leather vest and tight black pants, which are strapped securely by two belts, one with a large silver medallion on its front, tucked into knee high boots.

Who am I? If you said a member of the Village People, you’re wrong (and no Star Wars fan likes you). I’m Han Solo, one of the most manly, iconic male figures in bad-assery of all time. I shoot first and don’t even ask questions later because who needs to when you’ve got Jabba the Hutt breathing down your neck? Men of all ages want to be me, not only because my best friend is a seven-foot Wookie, or I get to fly the Millennium Falcon, a ship that made the Kessel Run in less than twelve parsecs (Star Wars nerds, please stand up), while seducing intergalactic princesses, it’s because I look good doing it. Looking back 30 years ago, Harrison Ford’s depiction of the space cowboy was probably a big reason why Star Wars had a strong female demographic from the very beginning. 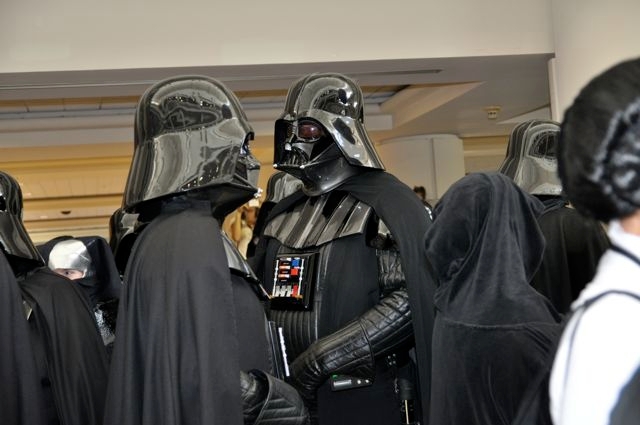 Star Wars gives its fans a sense of sheer wonderment, an imaginary escape from the humdrum toils of everyday life. Just because I met Darth Maul in the parking lot of a comic book store on a Saturday doesn’t mean he has to put on a suit and tie Monday and deposit my checks or balance my finances. But I tell you what, if I got the chance to sit down and talk about who the real Darth Maul is, you can bet your bottom dollar it would not be the suit-and-tie Maul, it’d be the dual-lightsaber-wielding Sith lord who took the time to take off that tie to get his costume just right. The Darth Maul who fake fought with Dr. Octopus, fake kidnapped slave Leia, and took photos with the starstruck children, who in all respects, should be way too young to even know about Star Wars considering its original release date, calling out, ‘Darth Maul, Darth Maul! Will you take a picture with me?’ That is the real Darth Maul. That is the real man behind the outfit; the man who takes his fashion sense seriously enough to say I love that galaxy far, far away.

This is who I am.