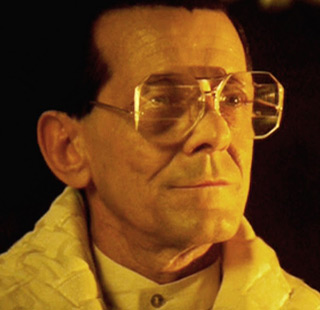 Few figures in North American industry today can be said to be true giants in their field. Long-established names have suffered gradual collapse or found themselves targets for amalgamation or overseas take-over, leaving just a handful of firms standing. The genetics sector especially has seen often fierce consolidation since its beginnings in the early 1980s, with only a single player now dominant. Tyrell Corporation is now the third largest company in the world by market capitalisation. It has grown to become the biggest designer, producer and marketer of replicants, and is not only supporting but actually fuelling off-world exploration and settlement. The man who began the firm in an East Coast garage fifty years ago holds more patents in his discipline than any figure in history, was the winner of the final Nobel Prize for Physiology or Medicine and was once famously described as the ‘god of bio-mechanics’. He is the founder and chairman of Tyrell Corporation, Dr Eldon Tyrell.

Dr Tyrell, are you a god? How many miracles have you performed today?
Well, I got you here through LA Spinner traffic in the rush hour, didn’t I? (laughs). Of course that description is absurd, but no matter how hard I try, I just cannot seem to stop journalists using it. It gets in the way of what I’m trying to do – what we are trying to do, here at Tyrell.

But your firm’s motto is ‘More human than human’, isn’t it?
Now you’re being mischievous. Indeed, though we are in fact saying that our Nexus units deliver greater power, endurance and speed than any man ever could, and can replace two or even three of them as a result. And all at a very competitive price, naturally.

Commerce is your goal, after all.
Exactly.

Are you fond of them, your Nexus units?
I suppose one feels a certain fatherly affection for each model. I did create them, ultimately. And our Nexus 6s, in particular, are beautiful – though I’m talking here of the beauty of a great symphony, or a mathematical equation or a Michelangelo sculpture, rather than the kind of beauty you might see in a magazine.

Despite that four-year lifespan?
Well, I think Laozi put it rather nicely: ‘the flame that burns twice as bright burns half as long’.

The ancient Chinese philosopher? Laozi is revered as a deity, isn’t he?
There you go again! That is true, but others record him as an actual figure who lived in the 6th century before Christ. On the other hand some historians regard him as a composite, a kind of touchstone for the wisdom set out by ancestors and now held in high regard by their descendants long after those individuals have been forgotten.

Is that how you see yourself?
(Laughs) It’s an attractive idea, I suppose, to be sustained in folk memory as the centre of knowledge and understanding. Certainly many people seem to need that, especially today, now that the old cults have died. But we’re creating new ones, too, both on and off world. Perhaps they will eclipse anything I might leave behind.

Do you really believe that, sitting here at the top of a pair of pyramids that can be seen half way across Los Angeles?
Half way across Los Angeles when the smog isn’t too bad, you mean? (smiles). Yes, it is a little grandiose, I suppose, but after all Tyrell Corporation needs space to work its magic. Lots of space. We design, conceive, incubate and bring to term thousands of Nexus replicants every year in this facility, to the benefit of man here and much further abroad. There are thousands of people, too, helping to do that. But yes, it also gives everyone out there something to look up to. That can be quite inspiring.

I noticed the owl is everywhere here, and not just in the Tyrell logo. Isn’t that an owl on your beautiful housecoat, if you don’t mind me asking?
Of course I don’t mind. Yes, it is. Owls are associated with intelligence, mythologically-speaking. Besides, I’ve always had a fondness for them. Did you see Bubo as you came in?

Yes – magnificent. It’s artificial?
Of course it is. But so wonderful.

Aren’t owls also associated with impending disaster?
Are they? How extraordinary. I’m not sure I knew that.

But it doesn’t bother you?
I think we’re pretty safe for a while, don’t you? (smiles).

Speaking of worrying, how do you relax? You’re a chess Grandmaster, aren’t you?
Yes, I’ve been fortunate enough to have my modest efforts recognised. And yes, I like a challenging game every now and then. It keeps the mind sharp.

Have you ever played a replicant? Who won?
Haha, that would be telling, wouldn’t it! (laughs).

You’ve been at the forefront of society for over half a century now. You’ve talked of your Nexus units as your children. Are they your legacy?
I think they are, yes. Them, and all the extraordinary things they’ve done.

Dr Eldon Tyrell, thank you.
Not at all. I’ve enjoyed it very much.