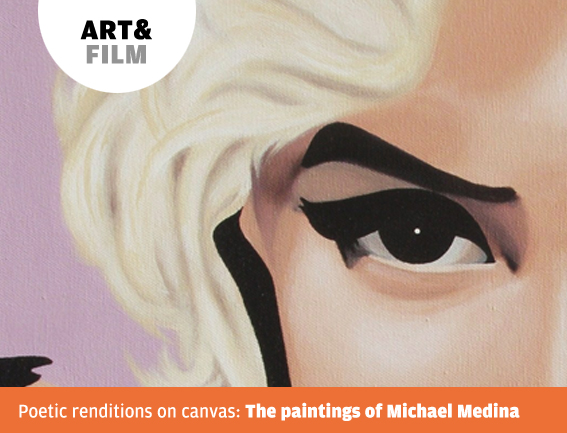 For Issue 7, Scott Jordan Harris met Michael Medina, a New Jersey-based painter whose astonishing canvasses are profoundly influenced by film. Here’s the first of two online continuations of their conversation.

Many painters are often referred to as ‘filmmakers’ painters’. (The influence of Caravaggio on Martin Scorsese, for example, is well known.) Are there any painters’ filmmakers?
The concept of a ‘filmmakers’ painter’ or vise versa, has always felt like a subjective term to me. Artists are individuals. Finding two individuals who share the same principles and come from different areas of creative expression (for example a filmmaker and painter), is a rare occurrence. Still, when it happens, it can lead to what I call ‘indirect collaborations’. I can’t speak for other painters, but I have felt at times that film artists such as Parajanov, Fellini, Gilliam, Burton and even Godard have somehow reached into my conscious by putting onscreen images and ideas I’ve manipulated in my thoughts for years. I must say, however, that directors themselves are not always the supreme artists of cinema. I don’t hold with the auteur theory.

Filmmaking is a collaborative medium. Artists like directors, writers, cinematographers, production designers, costume designers, composers, and even choreographers work with artisans who design hair and make-up, special effects, etc. Even the makers of miniatures play a pivotal part in bringing a film to the big screen. Therefore, depending on which artists you speak to (painters, sculptors, photographers, etc.), their ‘film influences’ can come from a number of avenues besides the director.

As a poet, I’m influenced by the thought-provoking screenwriting of Ingmar Bergman, John Sayles, Andrew Niccol, Spike Lee and Woody Allen. Cinematographers like Vittorio Storaro and Emmanuel Lubeski – who I call ‘poets of light and shadow’ – inspire me as much as the many directors I’ve mentioned. Even Bollywood’s master composer A.R. Rahman has been the inspiration to many of my abstract pieces. I imagine that’s why I love film as deeply as I do: it’s a medium that offers so many facets of creative expression from which to draw.

Tell me about your first cinema trip, and the painting it inspired.
Being that I was only six, my first experience in a movie theatre is a bit vague. Still, what I do remember was instrumental in awakening my love for film. It was 1980. With my parents and my sister Chris, I visited what is now a Community Center but was then a small cinema house in Harrison, New Jersey. Upon entering, I was instantly drawn to a striking poster for the Blaxploitation classic, Superfly (1974). It was framed and mounted like High Art. I begged my parents to let me see the film, convinced that this was the next best thing to Superman (1978). My mother just laughed and pulled me away.

Though both my parents appeared amused, I knew, even at that age, that they were also perhaps a bit embarrassed by something. I realize now that they were threatened by the potential of their son developing an interest in films showcasing the lifestyle of street hustlers and that’d I’d been the effectiveness of a well-made advertisement. Poster art had moved me to wonder whether or not the film I was to see would be as thrilling as Superfly must have been to those who had seen it.

The Blue Lagoon (1980) was the film we did get to see that day. Given the title’s reputation, some might question my parents’ discretion in choosing it. In their defense, The Blue Lagoon can always be viewed in good taste. The lush locations, cinematography, and score are of the highest calibre. Yet it’s the simplicity of its plot that stayed with me the most. The film is a pseudo ‘Adam and Eve’ story of two young lovers finding peace on an island reeking of Paradise found. As a happily married Christian, I guess I identify with that idealistic aspect of the movie. 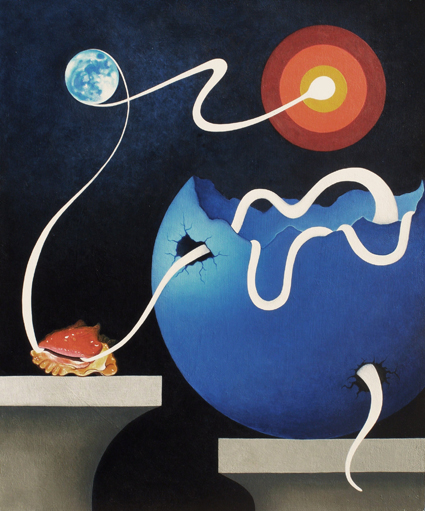 As for the painting it inspired, that piece was only created in 2000, after my wife and I had gone to see Danny Boyle’s The Beach. With this piece, I attempted to merge my first cinematic love, of The Blue Lagoon, with that of a similar film. Although it’s only an abstract rendering of my emotional response to the two titles, and tries to make no reference to any particular point in either movie, the moon in the composition is taken from a scene in The Beach.

Seeing Leonardo DiCaprio and Virginie Ledoyen’s under the glow of the moon instantly took me back to that indelible 1980s cinema trip in Harrison. If you can just forgive my painting’s title: Inspiration Ideally Induces Inventive Imagination, I guess you can say that it serves as a simple reminder of the innate ability of filmmakers to abolish the concept of time and space and transport viewers into a realm of the imagination that is both timeless and limitless.