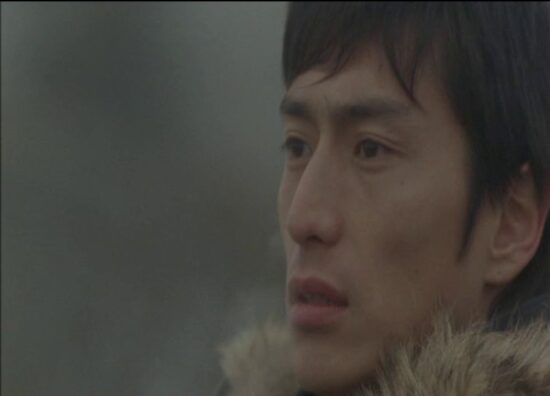 Following the young yakuza Kohji (Yusuke Iseya) from Japan to Canada, the action of François Rotger’s The Passenger (2005) takes place on two continents. Kohji, who has fallen out of favour with his mentor Naoki Sando (Yosuke Natsuki) because the latter surprised him in bed with his daughter Hiroko (Kumi Kaneko), is given a chance to restore the older man’s honour by killing a Canadian who is supposed to have paralyzed Sando with a stun gun and stolen the yakuza gang’s takings from dog races.

Rotger alternates sequences of Kohji in Canada with events in Japan, the parallel structure revealing both the geographical distance and how much the human destinies depicted are intermingled. The film’s fragmented structure – created by cross-cutting and flashbacks and sustained by abrupt cuts – often allows only allusions to what is going on. Kohji and Hiroko, bound to each other by strong feelings, are separated; other characters simply pass each other. These fleeting encounters, however, have deep consequences for their lives. 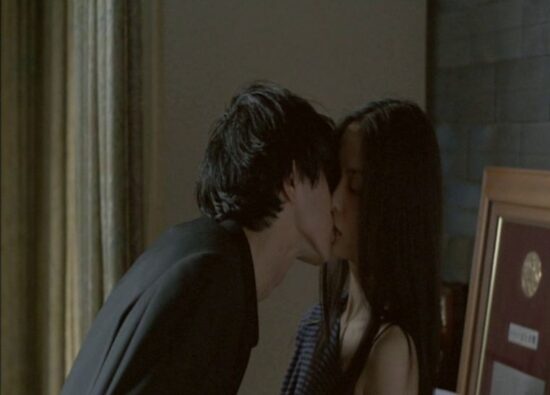 Kohji arrives in a country unknown to him with only a basic knowledge of English and none at all of French. He is, however, clearly a resourceful person – he steals a car and drives around the suburbs of Montreal to track down his prey, Tanner (François Trottier), a man on the run who owes money to a great number of people in the criminal world. Kohji’s journey consists of a series of violent and sexual encounters. He has sex with another guest at the hotel where he is staying and with Tanner’s ex-wife Viv (Gabrielle Lazure). While observing Tanner and two other men in an industrial area where they are spray-painting a car, he is spotted by one of the three Canadians, who knocks him to the ground, but a few moments later he is overpowered by the young Japanese man, who has recovered quickly from the blow.

Violence marks the Japanese sequences set in the yakuza world of organized crime. Akira (Ryo Kase), the young nephew of a yakuza boss, mistrusts Sando, and together with three of his friends, harasses him, provoking a heart attack. Akira is depicted as an aggressive youth whose behaviour is close to madness when he drives around in circles on a site in an industrial estate, his car set at maximum speed, or when he tries to force Sando’s car off the highway. He visibly enjoys violence, which seems to compensate for a lack of sexual experience – shown when he tries to embrace Hiroko with rather clumsy movements. In his first on-screen appearance, he is shown putting a big stone into a plastic bag, and in the next shot he is battering a man with this makeshift weapon.

The film starts with a series of shots of dog races, establishing an analogy between men and animals, and has an atavistic strain – the male figures can hardly suppress this character trait. Kohji distributes violence and is also used to receiving it. As well as being knocked down in one scene, he is struck violently when the boot of Viv’s car suddenly springs open while he is repairing the bumper. The sex he has with the unnamed man in the hotel room is also violent. And when the young Japanese leaves the still sleeping stranger the next morning, he pays him back in a somewhat childish manner by giving the bed a hefty kick, which wakes him up.

The violence intensifies in the last part of the film, alternating the killing of Tanner by Kohji and the murder of Hiroko by Akira, whose sexual advances she has refused. The death of this young woman, shot by Akira, is filmed in a general shot from outside the house that shows the two young people at some distance from each other behind the glass door to the terrace. By contrast, the murder of Tanner is filmed like an embrace between two bodies, Kohji strangling his victim underwater in a swimming pool. The parallel editing at this point links violence and love, suggesting that just when Kohji carries out his murderous deed, he is also losing the love of his life.

There are some brutal moments in the film, but it is mainly the abruptness of the movements within the image or of the editing that produces strong sensations of shock. This impression is heightened by the film’s frequent shifts from static shots or long-lasting shots to rapid movement, for example when Kohji and the stranger are shown face to face in the hotel room while undressing slowly. A hard cut underlines the movement with which Kohji’s naked body is suddenly and brutally pinned against the wall by the other man.

However, violence is mostly latent, which makes the film even more disturbing, and the ever-present tension is marvellously supported by the haunting music score. Violence emanates from the bodies and from the landscapes – the emptiness and ugliness of the industrial sites where numerous sequences take place; the greyness of the wintry countryside in Canada. Colours are almost exclusively reduced to greyish and brownish tones, and even the new-looking residential area where Viv lives is as sterile as her overly tidy house with its rooms and furnishings dominated by grey and pastel shades. Occasional spots of blood are a rare but highly ambiguous sign of life in the world of crime and corruption that The Passenger depicts. The barren wintry landscape in Canada is a hostile place in which Kohji is shown as a tiny human figure fighting his way through the snow and at the end kneeling on a frozen lake and drinking from a hole he has dug in the ice – the unsettling image of a lonely survivor. 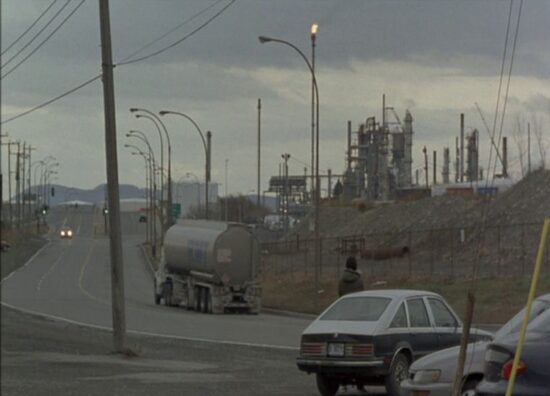 Some of the shots suggest a link with Japanese society after the bubble economy, for example Kohji and other homeless young men sleeping on the streets or the male prostitutes – Kohji among them – waiting for clients on the road close to a beach. These shots evoke the many young Japanese left with no perspectives during the recession in the 1990s. Throughout the film, Kohji remains practically silent, uttering only a few sentences or words. Other characters are similarly uncommunicative, an aspect that intensifies the violence and feeling of oppression permeating the film.

The film is shot in three languages – Japanese, English and French –, but the silence maintained by the characters and the lack of communication between them is one of the film’s central tropes. When Hiroko longs for her lover, image and voice are disconnected – the young woman appears in the image but her voice comes from off-screen as if from another continent and resonating in Kohji’s head. This separation of image and voice represents a further reinforcement of the themes of distance and fragmentation and points to alienation in a cruel world.

The characters are trapped in their roles, just like the dogs in their cages, to which they return after the race. Yusuke Iseya’s strong performance underlines the loneliness of the character he portrays and the difficulty Kohji has communicating with others. The actor’s face and body express perfectly Kohji’s aggressiveness but also very ordinary feelings, for example in the sequence in which Kohji struggles with the freezing cold in the stolen car. His behaviour is that of a cold-blooded killer, but he is also a victim of a society in decline and a mere object in a network of intrigues and betrayals that he is unable to understand. The lovemaking with Hiroko in an early sequence of the film and a flashback showing the two young people enjoying life in a field in the summer are occasional moments of tenderness. However, the appearance of Hiroko’s father puts an end to their intimacy in the sequence at the beginning; in the flashback, the shots of the field plunged into a warm, yellowish tone are suddenly replaced by images of a snowy Canadian landscape dominated by cold blues and greys. 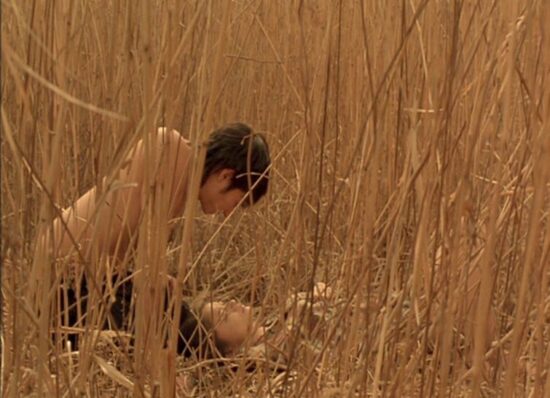 Just as communication becomes a matter of the body through violence or sexual intercourse, the most intense feelings are created through pain. Viv tortures her body at aerobic sessions and undergoes beauty surgery. Released from hospital, Hirokos’s father discovers a spot of blood – the only trace of his dead daughter. And Kohji is a lonely figure on a frozen lake, buffeted by icy wind. Life simply continues – a perpetual circle of boredom, violence and desire.