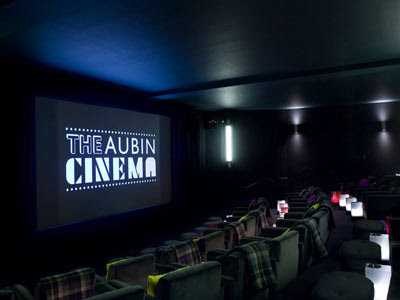 Beyond the designer garments and homewares to be found at Aubin & Wills on Redchurch Street in Shoreditch the intrepid cinemagoer will sniff out possibly the most comfortable small cinema in the capital. Mandy Kean spoke to Jez Conolly about this unusual venture into shopping/cinema crossover territory.

JC: Mandy, can you tell me a little about your involvement in cinema?
MK: I am currently Head of Cinema UK for the Soho House Group, and in addition to programming the screenings at the members’ clubs and the Electric Cinema, I am now involved with The Aubin Cinema. At the Kerry Film Festival in 2005, as a judge of the animation short film strand, I picked the winning Irish language short film, Backwards Boy directed by Nora Twomey. Nora went on to co-direct the Oscar nominated The Secret of Kells. Besides working full time for the Soho House Group, I am on the screening committee for the British Independent Film Awards and a member of the Dingle Film Festival board.

JC: What led to the setting up of the cinema in the Aubin & Wills Shoreditch store?
MK: Aubin & Wills cares deeply about the creative community. The Aubin Almanac is published twice a year and has fantastic arts and culture editorial. But it’s not enough for us to just comment and spectate – we want to enable and sustain creativity too. That’s why we opened the cinema and the gallery at our Shoreditch store. It’s an authentic way for us to connect with our discerning audience and provide them with a great cultural experience.

JC: Can you sum up the Aubin Cinema customer experience?
MK: To sum up: essentially we make being lazy easy. the Aubin Cinema provides an unrivalled level of comfort and style for up to 45 cinema-goers. What better way to enjoy a film than from velvet sofas and chairs, plumped up with Aubin & Wills cushions?

JC: How would you say do cinemas like the Aubin attract people away from either their plasmas and sofas or their nearest multiplex? What are they getting from you that they might not get elsewhere?
MK: The only other cinema in the near vicinity is RichMix which doesn’t have digital cinema capabilities or 3D and doesn’t quite have the same to offer as The Aubin. Plasma screens are no match for seeing a film on the big screen (no matter how big they are) and the atmosphere generated by the audience creates a buzz you wouldn’t get at home. Finally, at The Aubin they can get themselves a bottle of wine, settle back in a comfy sofa, put their feet up on a footstool and watch a film that they haven’t had to go out and buy / rent, with pitch perfect sound and visual quality. And someone cleans up after them when they leave! It’s a home away from home.

JC: You try to cater for both mainstream and arthouse cinemagoers. Which films have gone down especially well with your customers in terms of ticket sales?
MK: Since opening I would say our big draws have been The Illusionist, Inception, Bad Lieutenant and The Social Network.

JC: Do you put on special screenings of films or any other special events? Anything coming up in the near future?
MK: We have Kids Club and Aubin Sundays screenings on alternate Sundays and on Sunday 28 November we’re screening Ben Lewis’ The Great Contemporary Art Bubble – ‘the film the Art World doesn’t want you to see’  which will be followed by Ben sharing his personal experiences of making the film – a mix of stand up and audience interaction.  Tickets on sale from Friday 12 November!