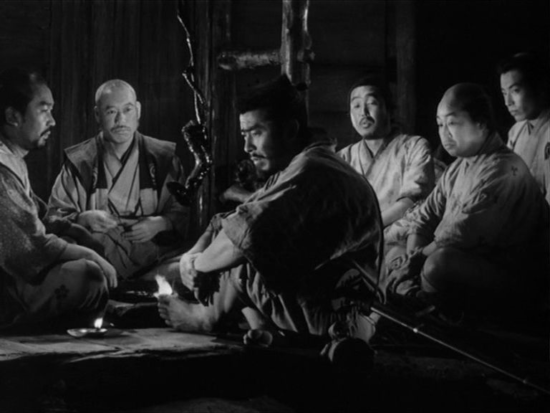 When I was informed about this month’s “double feature” topic, I spontaneously decided to write about Akira Kurosawa’s Seven Samurai (Shichinin no samurai, 1954) and Takashi Miike’s 13 Assassins (Jusan-nin no shikaku, 2010). On rethinking the matter, I quickly became discouraged. Is it possible to deal in one short article with a masterpiece such as Seven Samurai and with 13 Assassins, which is no lightweight either? The task is quite a challenge, but I have accepted it and will face it as best as I can.

13 Assassins is a remake of Eiichi Kudo’s eponymous film from 1963, and the opening sequence showing a man committing ritual suicide is almost a copy. Both of these films recall themes and motifs from Seven Samurai and share its humanist view. One might therefore ask what has become of this view in 2010. Seven Samurai is set in the Sengoku period (Age of Warring States, c. 1467 – c.1600), whereas the historical context of the film released in 2010 is the peaceful period which lasted from the early 17th century until the mid-19th century and during which samurai became bureaucrats. In fact, 13 Assassins is set very precisely in 1845, twenty-three years before the end of samurai rule.

In Kurosawa’s film, the group of seven ronin (masterless samurai) protects peasants against marauding bandits; in Miike’s film, the violence emerges within the warrior class, which has decided to purge itself of evil elements. Here, it is not the peasants who ask the samurai for help, but instead a high-ranking samurai decides to resolve the problem by eliminating the sadistic lord who might become the heir of the shogun. In both films, samurai are recruited for the task. The peasants play a minor role in the more recent film, and the village – a central space in Seven Samurai – is simply a setting for the action in Miike’s jidai geki (period film). Shinzaemon Shimada (Koji Yakusho), the samurai who has been ordered to kill the bloodthirsty Lord Naritsugu Matsudaira (Goro Inagaki), borrows the village, and the headman accepts his payment, knowing that even if the whole village is destroyed, the peasants will rebuild it. This attitude is reminiscent of the end of Seven Samurai, where, once the menace has been eliminated, the peasants start the harvest as if nothing has happened. 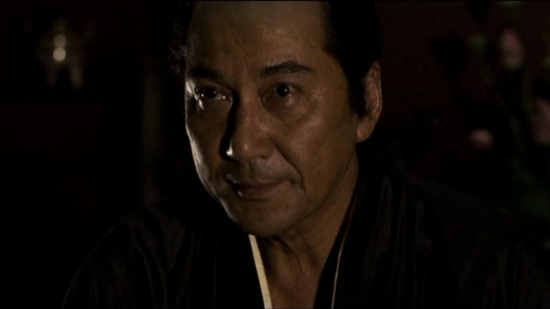 In both films, samurai die for the greater good of the community. Just like Kambei (Takashi Shimura), the leader of the ronin in Kurosawa’s film, Shinzaemon embodies the ideal samurai, who is not only a good fighter and strategist (albeit no superhero), but also a compassionate man who is appalled by Matsudaira’s cruelty when confronted with one of his victims – a woman whose arms, legs and tongue have been cut off. Not unlike Kambei, he is a generous and good-humoured man, a determined fighter against injustice who does not suppress his emotions. When he asks the mutilated woman what happened to her family, she writes, the paintbrush between her lips: “Kill them all!” He comments on the language spelling mistake with a huge laugh, exclaiming: “What awesome irony”. Later, he writes the sentence on his group’s banner and shouts it angrily into his enemies’ faces.

The hunter Koyata (Yusuke Iseya) has considerable similarities to the would-be samurai Kikuchiyo in Kurosawa’s film. A character as untamed and rebellious as the one played by Toshiro Mifune, he is familiar with the woodlands, which is unknown territory for the samurai (in Seven Samurai, Kikuchiyo understands the mentality of his fellow peasants, something which the samurai do not). Koyata’s killing of the rabbit is reminiscent of Kikuchiyo catching a fish with his bare hands, and rather like the main character in Kurosawa’s Yojimbo (1961), also played by Mifune, the young hunter observes the village from a bell tower. Kikuchiyo expresses his sexual desire while observing the women in the village, and in a similar vein Koyata talks incessantly about the woman he is in love with, and he decides to run away with her at the end of the film.

Both Kikuchiyo and Koyata pretend to be samurai but adopt a critical position towards the warrior class. One of the key scenes in Seven Samurai is Kikuchiyo’s monologue, in which he accuses the samurai of exploiting the peasantry and reveals his own humble origins. The young hunter Koyata does not deliver a long monologue, but he reproaches the samurai as being arrogant and ineffective. Not unlike Kikuchiyo, he is an elemental force with a deep understanding of nature, which makes him a character larger than life, an aspect that becomes all the more apparent at the end. At one moment in the battle, Lord Matsudaira runs him through with his sword, but after the battle Koyata miraculously reappears as if nothing has happened. There is no explanation in the film, but Miike implies that Koyata has supernatural powers, presenting him as an exaggerated version of the super-samurai played by Mifune in Yojimbo and Sanjuro (1962). This resemblance is underlined by Iseya’s acting, reminiscent of Mifune’s exuberant gestures and shouts in Seven Samurai.

The mill wheel, a frequently framed object in Seven Samurai and linked to the idea of evanescence but also to purification, is shown in one shot of the village in Miike’s film. The final battle takes place in heavy rain, with the story culminating in this action sequence in Kurosawa’s film as well as in 13 Assassins. In these more recent films, the battle is even more prominent than in Seven Samurai, taking up 45 of the 125 minutes of Miike’s film. Modern techniques and a larger budget make it a vivid and realistic spectacle as streams of blood mingle with the muddy earth, limbs are cut off and the burning village is strewn with dead bodies of men and horses. Everything is on a more grandiose scale and more spectacular, as befits today’s expectations. 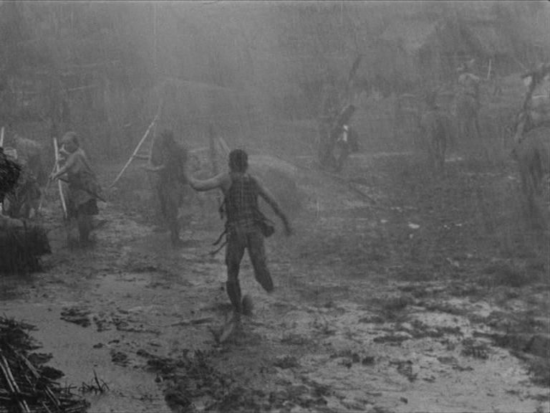 However, Kurosawa’s taut pacing and dynamic editing style are unmatched. The battle in Seven Samurai, for which Kurosawa used three cameras for the first time, is simply breathtaking. The elaborate rhythm, alternating between quiet phases and action, silence and noise, permeating Kurosawa’s film and reminiscent of Noh theatre is quite extraordinary. The touching figure of Kikuchiyo is the last samurai to die in the battle. His death, face in the dirt, has nothing heroic about it, but, recalling human fragility, gives rise to deep feelings of compassion and sadness. Kurosawa reveals the dark side of the samurai culture of obedience and sacrifice, a reference to the samurai code of honour which was distorted during World War II. He criticizes the absolute obedience required by the wartime military government, having Kambei’s friend say that he is not ashamed of having survived a battle by hiding in a ditch.

The samurai in Miike’s 13 Assassins are from the very beginning on a suicide mission. Not unlike Kurosawa in many of his films, Miike condemns corruption and violence, showing that the crimes of the mighty Lord Matsudaira are covered up by the political system. He deals with a central question of films involving samurai: the conflict between giri (social obligation) and ninjo (human feelings). This conflict is highlighted by the characters Shinzaemon, whose aim is to help the weak, and Hanbei (Masachika Ichimura), the chief vassal of Lord Matsudaira, who blindly accepts the samurai duty to obey his master, despite the latter’s evil intentions. Matsudaira is eager to reintroduce war into a pacifistic society, and this creates a link to recent developments towards remilitarization in Japan. 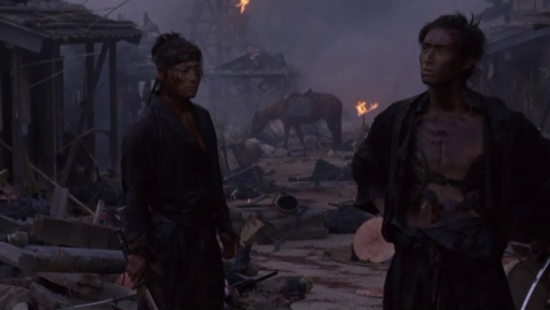 13 Assassins, following many other examples, including Kihachi Okamoto’s Kill! (Kiru, 1968) and Hirokazu Koreeda’s Hana – The Tale of a Reluctant Samurai (Hana yori mo naho, 2006), presents men disillusioned with their samurai status. Shinzaemon’s nephew Shinrokuro (Takayuki Yamada) plans to become a bandit and to migrate to America. In contrast, Kurosawa’s film offers in Kambei, the film’s moral centre, an ideal to follow. Koyata enjoys fighting, despite the death and destruction. He is even bored by the bloodshed, which for him is less exciting than fighting a bear. The rebellious Kikuchiyo undergoes a change as a result of Kambei’s influence but nevertheless has to die to find enlightenment in another life. At the end of Seven Samurai, in which the framing and editing underline the deep divide between samurai and peasants, Kambei states: “So, again we are defeated. The peasants have won. Not us.” Kurosawa mourns the fact that his country has lost the best part of itself. In 13 Assassins, the two surviving young men – Shinrokuro and Koyata – filmed in the smoking ruins of the village, give a critical appraisal of the samurai as a social class which has no meaning for them and whose values have been betrayed, leading to hatred and destruction.

Note: All images are screenshots.