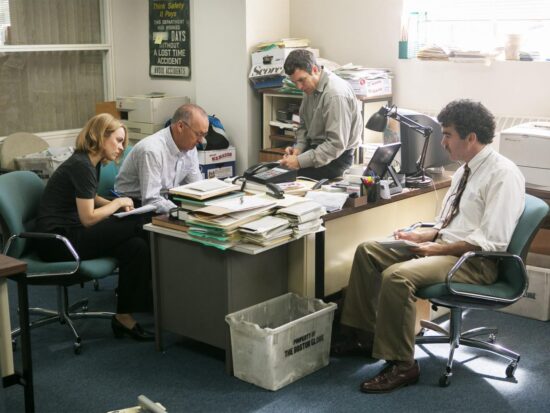 Tom McCarthy’s Spotlight (2015) teases out the drama in an explosive news investigation. It is genuine, focusing on both personal reconciliation over a harsh reality and societal corruption. The plot progression of the film is gradual. The introduction is tedious as all the information is gathered, which makes the ending all the more poignant.

The story starts in a quaint Boston town with a close-knit Catholic community. The seemingly benign outlook has a darker secret. After lawyer Mitchell Garabedian (Stanley Tucci) exposes how the Archbishop of Boston knowingly dismissed charges of pedophilia, the new editor of the Boston Globe, Marty Baron (Liev Schreiber), urges Spotlight team editor Walter “Robby” Robinson (Michael Keaton) to look deeper into the story. The charge against one priest soon reveals a dozen cover-ups by the Boston Archdiocese. The Spotlight investigative team hears the story of the victims, looks through public documents, and interviews former priests. The development of the investigation takes a personal turn after the journalists discover how visible and imminent the perpetrators are.

The film does a fantastic job in balancing the professional and personal. The monumental significance of the story shines in how each journalist reflects back on their community. It’s Sacha Pfeiffer’s (Rachel McAdams) hesitance in attending church with her grandmother. It’s Matt Carroll’s (Brian d’Arcy James) anxiety after discovering the proximity of the priest treatment center to his house. But to top them all, it’s Mike Rezendes’ (Mark Ruffalo) explosive outburst against Robinson, as they debate the best time to publish their findings.

The cinematography and lighting aptly capture the story. Whether a slow montage of the church choir on Sunday or an aerial look of the nondescript town, such footage contrasts sharply with the sinister crime at hand. The contrast of the town ambiance with the dark and dimly lit courthouses and offices shows how, without any outside interference, human beings can make an otherwise peaceful place hell on earth.