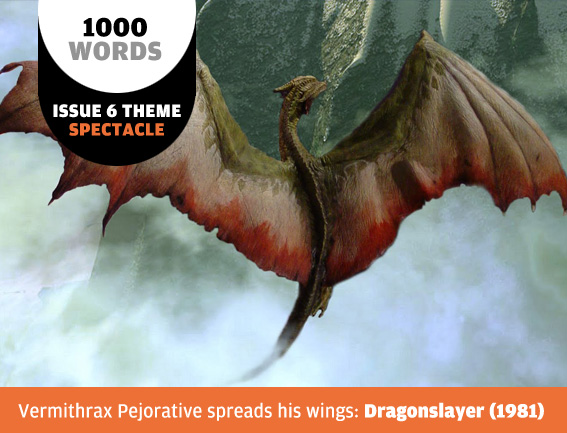 I can’t help thinking that, for anyone born in the 1980s and subsequently raised exclusively on a diet of post-Jurassic Park creature realisation, the cinematic work of stop-motion maestro Ray Harryhausen must seem as archaic as Victorian magic lantern shows. What then would they make of Go-Motion, the near-forgotten transitional fossil of animation techniques that briefly plugged the gap between the jerkiness of the Kraken in 1981’s Clash Of The Titans and the perfect computer-generated fluidity of ‘Lasseter-mation’?

Its detractors would have you believe that Go-Motion lives in the same technology cul-de-sac as Betamax, the Goblin Teasmade and the LED digital watch, which is possibly true, but when you come to read up on just what the pioneers of this lost craft did to achieve their results you have to give them full marks for effort. The challenge was plain and simple; how do you produce a piece of stop-motion animation that does away with the characteristic staccato effect produced by capturing a static object repositioned after every frame? Harryhausen had taken stop-motion about as far as it would go but a certain Mr. Lucas and his buddies at Industrial Light & Magic were looking to push the realism envelope through their work on a certain successful science fiction movie franchise and that meant smooth character animation fitted as standard.

That said, back in 1977 they were happy to use good old clay-mation for the pieces in the Millennium Falcon chess game sequence in Edisode IV, but by the time they came to tame a tauntaun and attempt an AT-AT for the sequel, ILM effects wizard Phil Tippett was ready to try out an adaptation of the Harryhausen technique that lent a polish to the movements. Go-Motion was achieved by moving the animated model slightly during the exposure of each film frame, producing a realistic motion blur. While the frames in stop-motion are made up by images of stills taken between the small movements of the object, the frames in Go-Motion are images of the object taken in the same instant it moves. Gently bumping or flicking the puppet before taking the frame produced a slight blur, as would shaking the table the model is standing on while the film is being exposed. This crude but effective technique also involved smearing vaseline on the camera lens, then cleaning and reapplying it after each shot to create further blur around the model. We all know how time-consuming ordinary stop-motion is to produce; Go-Motion took even longer to complete. Great care had to be taken to ensure that the puppet did not move too much or that nobody knocked or moved any of the other props or set pieces.

By far the most effective application of Go-Motion can be seen in Dragonslayer (Matthew Robbins 1981). Tippet was again on hand to produce the animated creature and took Go-Motion one step further. The dragon that we see is essentially a rod puppet. The rods were attached to motors which were linked to a computer that recorded the movements as the model was traditionally animated. When enough movements had been made, the model was reset to its original position, the camera rolled and the model moved across the table. Because the model was moving during shots, Tippett achieved believable motion blur. The final results are to this day regarded as possibly the finest realization of a dragon on film. It’s interesting to compare the beast in Dragonslayer, grandly titled Vermithrax Pejorative, with its kid brother, rather more routinely name-checked as Draco, some fifteen years later in Dragonheart (Rob Cohen 1996) which Tippett also worked on, presumably after a lot of evening classes in computer programming. Somehow the newer CGI effort, although laudably realized, lacks a certain je ne sais quoi compared to Vermithrax. Or am I just being a ‘vinyl’s better than CD’ analogue snob? Actually no I’m not. There is definitely something more believable about the Go-Motion creation, it seems very much in and of the world of the film, if anything its still-relative clunkiness compared to Draco adds to the sense of removal from the real world and immersion in the sweaty grime and half-light of the Dragonslayer’s fictional medieval kingdom setting.

However impressive the effects in Dragonslayer were, Go-Motion’s lifespan was limited. Aside from a couple more prominent applications – for the endoskeleton effects in The Terminator (James Cameron 1984) and the ever-malfunctioning ED-209 in Robocop (Paul Verhoeven 1987) – it was soon eclipsed by pixels. At least in the realms of hyper-realization. Nick Park and the plasticine people at Aardman have used something akin to the ‘shaking the table’ technique to create blur during action sequences in The Wrong Trousers (1993), A Close Shave (1995) and Wallace & Gromit: Curse Of The Were-Rabbit (2005). Hurray for them. In the stop-go world of movie animation this is the way to contract really worthwhile RSI. Much more rewarding than the aching wrists and fingers currently being experienced by the keyboarders who worked on, say, the new version of Clash Of The Titans due out in a few weeks. All that pain and it’ll look just the same as all the other creature features of the last ten years. Where’s the fun in that?

One reply on “Thousand Words: Go-Motion animation: it was all just a blur”

[…] and Howard the Duck was no exception. The movie was packed full of ambitious effects, from the “Go Motion” technique, used to create the realistic blurring of the film’s sculpted miniature Dark […]