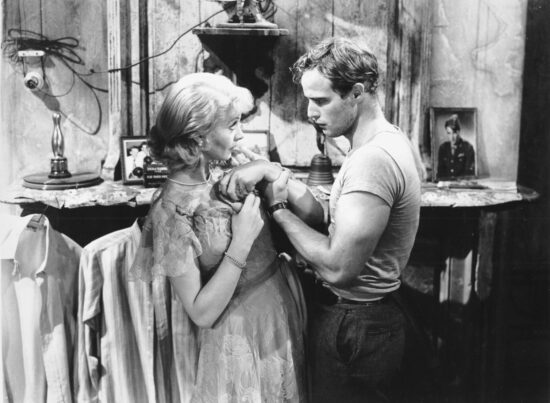 It was September when A Streetcar Named Desire, the film, premiered in New York City. The year was 1951. Almost exactly seventy years ago. Marlon Brando had reprised his role from the Tennessee Williams Broadway play of the same name that had propelled him to the attention and acclaim of theatre goers and critics alike. Elia Kazan returned, too, in the directing chair. So did Kim Hunter (Stella Kowalski) and Karl Malden (Mitch) in the supporting roles. Only Jessica Tandy was replaced from the main cast, by Vivien Leigh as Blanche DuBois. Leigh was the right choice, Brando thought, who had never gotten along with Tandy. His unpredictability, the imagination, naturalism and radicalism he brought on stage, the classical trained Tandy didn’t know what to make of it, didn’t know what she was witnessing. But the audience knew, they “felt that they were witnessing the dawn of a new cultural era,” Patricia Bosworth notes in her book Marlon Brando, “a breakdown of sexual taboos, the play’s central conflict, of desire and sensitivity against brutality dramatized the eternal clash within everyone.”

Tennessee Williams thought Brando’s reading – Kazan arranged a meeting between the playwright and Brando at Williams’ house before rehearsals began and Brando eventually arrived several days later – was by far the best reading he had ever heard. Kazan saw in Brando the characteristics of Stanley: “the sexual magnetism, the brooding self-involvement, the little boy quality. He was both brute and infant, and had a strange tenderness, as well as a bizarre sense of humour.” But Marlon didn’t slip right into the role of Stanley Kowalski.

It was only near the third week of rehearsal that Brando got into character when the costume designer, Lucinda Ballard, took him for a fitting at the Eaves Costume Company. She had decided to dress him like one of the Con Ed ditch diggers she’s seen slaving away in the heat in midtown, according to Patricia Bosworth citing Peter Manso’s story in his biography of Marlon Brando. “Their clothes were so dirty that they had stuck to their bodies.” It was the “undesigned” outfit that Ballard chose – T-shirt and blue jeans – that ultimately became part of the culture, “the new symbol of American maleness”, an urgently desired new beginning, a badge of cool, a symbol of identity, the defining fashion moment of the decade, and, most importantly, fashion that was accessible to all, regardless of the economic reality in which people lived.

A ragged jacket, a couple of pairs of jeans and t-shirts and tennis shoes were his acting costume from his theater days, when he started to work with Stella Adler, prompting her to ask “Who’s the bum?,” when he entered her class. He would soon become her protégée. Stanley Kowalski’s look was not far from the bum, but it took the hand and imagination of a costume designer to transform an “undesigned” outfit into a character. As Patricia Bosworth continues to retell the story in her book, Ballard “dyed a couple of t-shirts red and washed them over and over again until they had shrunk.” Then she tore the right shoulder to suggest that Stella might have scratched Stanley. She had the tailor cut and tape the jeans to fit the contours of Brando’s body like a second skin. When he saw his reflection in the mirror, he saw how the jeans outlined every muscle in his thighs. He “almost went crazy,” Ballard told Peter Manso. “He was dancing between the glass cases…leaping up off the ground,” saying “This is it! This is what I’ve always wanted!” This was also what he needed to become Stanley Kowalski, and his “undesigned” outfit became part of the Brando iconography and of cinematic history. 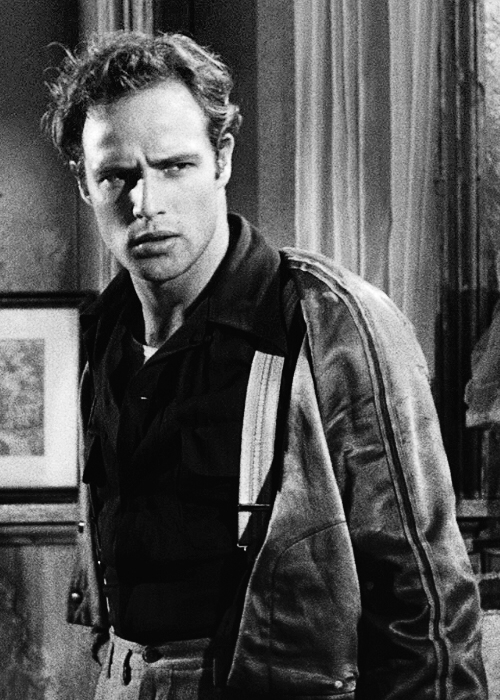 Brando would later complain that he was sick to death of being thought of as a blue-jeaned slobber-mouth, referring to Stanley, when he accepted the role in Julius Caesar (1953). But that look was so new and daring and unexpected and instinctive, just as his acting was so new and daring and unexpected and instinctive – the reason why Jessica Tandy didn’t know what she was witnessing (“Hers seemed to be a performance. Marlon was living on stage,” Elia Kazan said about his contrasting leading actors in the play, as William J. Mann writes in The Contender: The Story of Marlon Brando) – that it forever changed cinema. As Camille Paglia put it, “Brando brought American nature to American acting, and he brought the American personality to the world … Brando, the wild, sexy rebel, all mute and surly bad attitude, prefigured the great art form of the sixties generation: rock and roll.”

And perhaps this revolution he brought on screen is nowhere more telling than in the opening image to this article, that shot of Stanley Kowalski and Blanche DuBois. That shot encapsulates the historical significance of their pairing together: the brooding naturalism, the poet’s face and “squat gymnasium physique” (as described by Truman Capote), the raw sensuality and animal virility that Brando brought on screen, with his “sweaty t-shirt and unself-conscious swagger” and a voice partly drawn from observing working class guys in nylon shirts from a phone booth in Times Square – “Guys like Stanley, who hold a cup of coffee like an animal with a paw around it. The Stanleys of the world have no self-awareness.” – everything was so earthy and explosive and intuitive, and in striking contradiction with the stagey Vivien Leigh, with her sensitivity, cultivated femininity and nervous theatricality that so hauntingly projected on screen the inner torments of frail, faded Southern belle Blanche DuBois – “She was very much Tennessee’s wounded butterfly,” Brando described her. Old Hollywood was on its way out. Watching Brando, the world knew they were at the center of something that was about to change.

“Don’t use yourself, you’re too small. Find it in your imagination,” was Stella Adler’s acting philosophy, the opposite of Lee Strasberg’s Actor’s Studio Method acting, which is so often still wrongfully associated with Brando. Even today, seventy years later, watching Brando in Streetcar leaves you with something so vivid and intense that makes you realise that, to this day, he still has no identifiable image on film. And in that “undesigned” look that didn’t belong to anyone, the whole world suddenly found, and generation after generation will continue to find, a sense of belonging. 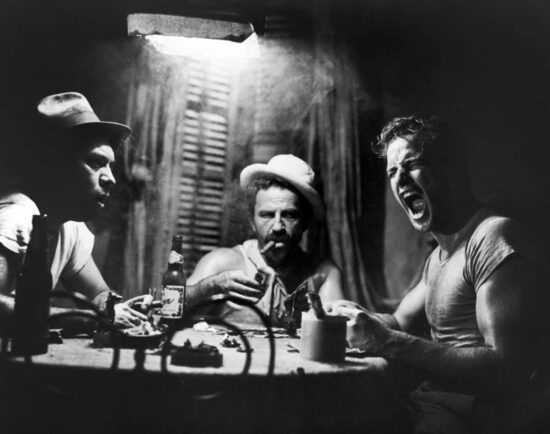