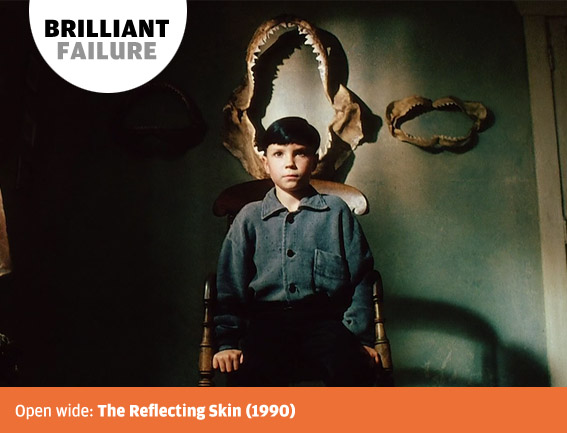 If making a film was like baking a cake one would reasonably expect art school polymath Philip Ridley’s 1990 directorial debut The Reflecting Skin, with its combination of fine ingredients, to have turned out like the grandest Viennese sacher torte. So how come it looks and tastes like a Greggs jam doughnut?

Actually that’s a little unfair to Greggs; their current hot pasty skirmish with the Coalition government is after all an important attempt to draw a line in the sand of democracy and seemingly the top issue of the day for the Great British Public to get worked up about (systematic demolition of the NHS anyone? No?). It’s also rather unkind to Ridley who is almost unique among British directors in sticking to his creative guns, even if it has meant that the pace at which his body of film work has grown since The Reflecting Skin has slowed to speeds normally associated with Terrence Malick.

Some very good things went into his mixing bowl; there are great performances from the likes of Viggo Mortensen and Lindsay Duncan, some exceptional location cinematography from Mike Leigh regular Dick Pope and a movingly melancholic score by Nick Bicât. Ridley’s own artistry provides the rich fruit filling, one grown from seedlings sown at St Martins School of Art that found form in the written word during the 1980s and led to his award-winning screenplay for Peter Medak’s The Krays (1990).

What it also benefits from hugely is several heaped tablespoonfuls of ambition. One can’t accuse Ridley of limiting himself to his own East End roots when sourcing material. There’s a big wide world out there for him to explore, and in The Reflecting Skin he sets his story amid the vast golden corn fields of 1950s Mid-West America. Young Seth Dove (Jeremy Cooper) embodies the universal nightmare of childhood/end of innocence courtesy of an hysterically abusive mother (Sheila Moore) who dishes out draconian punishments, a distant closet-homosexual father (Duncan Fraser) who commits suicide, an absent brother (Mortensen) who returns with horror stories of the atom bomb, a spooky neighbour (Duncan) who pines for her lost love and a roving cadillac full of murderous local teenagers.

What it lacks sadly is the binding presence of authenticity. Ridley’s take on the setting owes much to the American Gothic visual language of artists such as Edward Hopper and Andrew Wyeth, but unlike the work of David Lynch (who lazy journos have been comparing Ridley to since day one) which adheres believably, albeit perversely, to that director’s own personal experience, the world that Ridley creates feels like a Thatcher-era leaf through the postcard racks at your local branch of Athena. Writers and for that matter film-makers are supposed to show and not tell, but with The Reflecting Skin Ridley was showing off and ultimately didn’t really have a lot to say. The result is somehow both half-baked and overcooked, hollow and yet stodgily pretentious, and for many mostly indigestible.

Which is a shame, because there is enough here to suggest that Ridley could have been, should have been (still might be?) a leading British maker of movies. It is possible to watch The Reflecting Skin and enjoy it in the way you might enjoy licking the cream off the top of a cake. Be stimulated but don’t expect to have learned much by the end of it. That’s if you manage to get your hands on a copy – the film nearly qualifies for the Big Picture ‘Lost Classic’ status on account of its low levels of commercial availability, so if you’re going to go looking for it, and you don’t fancy the fallback segmented video sharing website experience, expect to find US or German import DVDs or tired VHS copies through the popular online suppliers.