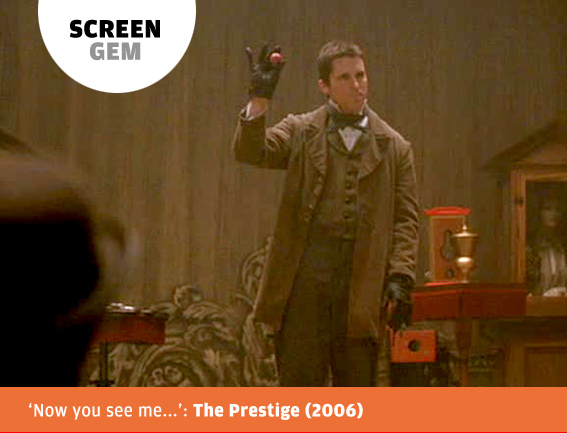 “Just a rubber ball,” says magician Alfred Borden (Christian Bale) after a member of his audience has inspected it prior to the first public performance of his new trick. “No, not a normal rubber ball. It’s magic.” Said trick is The Transporting Man, in which Borden begins to bounce the ball across the stage before entering a door placed to one side, only to reappear from another door opposite, thus catching the ball he himself threw. Watching on, rival magician Robert Angier (Hugh Jackman) is stunned, and embarks upon a quest to replicate Borden’s trick – a quest that firstly depends on the cooperation of a drunken look-alike, and secondly involves a dangerous teleportation device. (Spoiler Alert: The Film’s Ending Revealed)

The first time we see the red rubber orb in Christopher Nolan’s The Prestige (2006) is significant. Borden, having been wrongfully sentenced to death for the apparent murder of rival Angier, is chained to a table in a prison courtyard. A guard goads him: “They’re just stupid tricks right? They haven’t helped you get out of here have they?” Borden, still chained to the table, brings out the ball and begins a simple vanishing trick, which is meant to double as a metaphor for his own eventual disappearance.

Throwing the ball in the air, however, Borden botches the catch and clumsily drops the ball to the floor. Fumbling to retrieve it while the guard laughs, the magician begins to walk backwards, provoking the guard to follow him. “How did you get so famous then, eh?” the guard asks. “Magic,” Borden replies, just as the guard’s leg jolts back, chained to the table. Borden’s foul-up was deliberate, a means by which to unchain himself and tie up the guard. He has the last laugh.

This simple scene gets to the crux of The Prestige’s eventual twist. In an increasingly obsessed effort to reproduce Borden’s Transporting Man showpiece, Angier is willing to push science, risk death and play god. But while the teleportation device with which Angier clones himself each night is a marvel of scientific technology, allowing as it does an endless line of reproductions, Borden’s secret is more unique still (his ball is rubber, a material resistant to the electricity required by Angier’s machine).

As it turns out, Borden’s magic is genetic: he feigns over-elaborate trickery with something much more simple and irreproducible, by way of a daily sacrifice and commitment. Whereas Angier’s magic pertains to physics, Borden’s duplication is biological, which is why his final utterance of “Abracadabra” prior to being hanged has a devastating finality.

Borden’s hanging, like his botched catch in the prison courtyard, is itself a kind of sleight of hand. Though he does indeed die, he lives on in his twin, with whom he took turns to play loyal servant Fallon. Attentive viewers may have cottoned on earlier that Fallon is another “version” of Borden in disguise, but as that red rubber ball comes bouncing defiantly toward Angier in the film’s final moments, did they realise his magic was something much more sacred than scientific invention? Were you watching closely?