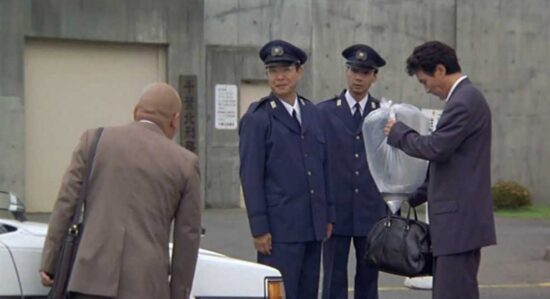 After serving eight years in prison for the murder of his wife, Takuro Yamashita (Koji Yakusho) is released on probation and opens a barber shop in the home town of his parole officer, an elderly Buddhist priest (Fujio Tokita). Shohei Imamura’s The Eel (Unagi, 1997) depicts the slow return to normality of the former salaryman who has learned his new trade in prison and tries to rebuild his life in the peace of a rural environment. He is reluctant to rejoin the company of others and eager to avoid conflict, which would mean an end to his probation. He is an alienated man, unable to adapt quickly to normality. Having internalised the rules of institution learned in prison, he automatically follows a group of men marching in step. His business does not prosper, for he is as “friendly as a prison door.” The creature he is closest to is the eel he has been taking care of since his time in prison.

The eel is the central trope for Imamura, who makes use of symbols, mise-en-scène devices, and dramatic situations to reveal his protagonist’s state of mind. Yamashita’s relationship to the eel offers insights into his feelings, the eel being a means to avoid communication with other people. He talks to the eel, which, unlike human beings, does not tell him what he does not want to hear. The eel in the glass tank is protected, whereas Yamashita cannot keep life out of his barber shop. A few neighbours, who come for a haircut but also out of curiosity, intrude into his private space, which he desperately tries to defend. His loneliness is paralleled by Masaki’s (Ken Kobayashi) obsession with aliens. Masaki replies to Yamashita’s rhetorical question, “Making friends among humans scares you, doesn’t it?” with, “You hate people. That’s why you talk to your eel.” The eel fills the emptiness in Yamashita’s life and is a surrogate for the love he has lost and for a normal life. When he throws an eel he has caught back into the river, he explains this act to his curious neighbour, the fisherman Jukichi (Makoto Sato), as follows: “I could never have loved that one.” 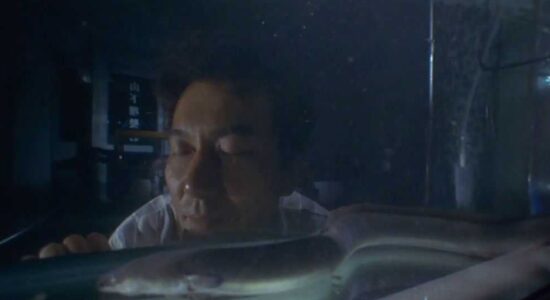 Dream sequences, visions, and memories shown in flashbacks provide other clues to his feelings. The priest and his wife wonder whether he has repented of his murderous deed. Even though Yamashita never expresses a wish to visit his wife’s grave, he is tormented by what he did: “I did not forgive her, because I loved her. Did I kill her because I loved her?” The opening sequence shows him reading a letter which claims that his wife is committing adultery. Following up this accusation by the anonymous writer, he discovers her making love to another man and kills her in a fit of jealousy. Eight years later, he is still haunted by the question of whether this letter, which has disappeared, really existed or is a mere figment of his imagination. This obsession is expressed in the voice-over – his inner voice – quoting sentences from the letter and also in a nightmarish scene in which the letter falls into the eel’s tank and Yamashita is sucked down into the water, unable to catch hold of the sheets of paper.

Yamashita’s past continues to haunt him in everyday life. Keiko (Misa Shimizu), whom he once saved from a suicide attempt, reminds him of his dead wife; the garbage man and former fellow convict Takasaki (Akira Emoto) tells Keiko about Yamashita’s past and threatens Yamashita himself. Takasaki is a personification of Yamashita’s self-doubt and remorse, insisting on the necessity for repentance. He becomes more openly Yamashita’s alter ego when the two men have a violent struggle during which Takasaki expresses his frustrations and sexual desire, revealing Yamashita’s own suppressed feelings. Yamashita has taken a life, but he has also saved one. However, the young woman’s presence in his life is filled with ambiguity. Her resemblance to his dead wife is emphasized by the fact that in two sequences she wears the same kind of skirt. She and her mother are Carmen-like figures, – the epitome of the femme fatale. Imamura does not make this reference explicit, but shows the women dressed as gypsies and dancing to music from Bizet’s opera and to flamenco music. However, Keiko’s mother has been committed to a psychiatric hospital, and Keiko fears that her illness is hereditary. In fact, the treacherous character is Keiko’s former lover, Dojima (Tomorowo Taguchi). 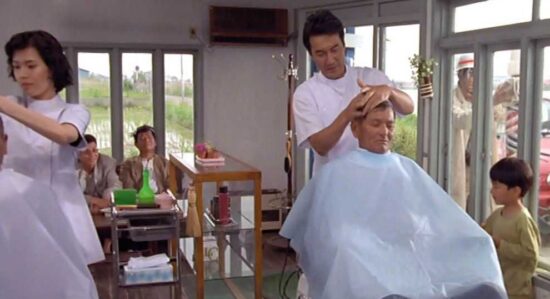 Not unlike Yamashita, Keiko is haunted by a violent past; but she is not simply a victim, for she has managed to free herself from her abusive lover. She starts to work in Yamashita’s barber shop, puts life into the business, and, undaunted by his rejection, contributes to her employer’s return to normality, as do the goodhearted neighbours and his parole officer, who all accept him despite his past. The barber shop, no longer sombre and dilapidated as at the beginning but painted in bright colours, is a visual symbol of change. However, Yamashita finally has to return to prison; by getting involved in a fight to save Keiko from Dojima, he has violated the terms of his probation. Before taking leave of his newly-gained friends, he releases the eel into the river.

The Eel’s mixture of drama and absurdity creates an appropriate tone for this tale of rebirth. Not unlike his eel, Yamashita swims towards the surface, willing to take responsibility, even for Keiko’s unborn child, fathered by Dojima. The fate of the eel is as uncertain as Yamashita’s. Newly hatched eels, as Yamashita has learned from Jukichi, travel thousands of miles to Japan, and many of them die during their long journey. The unexpected changes in Yamashita’s life point towards the unpredictability of human existence. The omnipresent symbol of water – rivers, canals, ponds – reveals another parallel between the protagonist and his eel. The eel is set free from the confines of its tank, whose walls were both protection and constraint, and can now live in the open waters of rivers and oceans, symbolizing both renewal and the fluidity of life. Yamashita has overcome the invisible walls he built around himself and is willing to move into the shapeless outside world, with all its dangers and uncertainties. 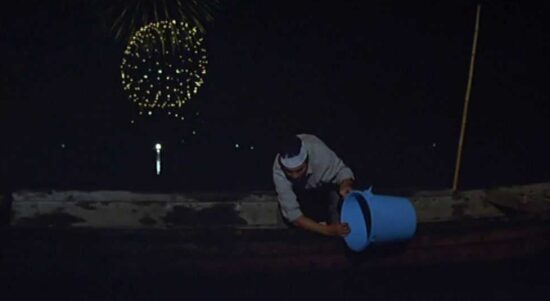 When Masaki asks her whether the aliens will come, Keiko replies optimistically and expresses her own hopes: “If one truly expects them, they will come.” The final image is that of a bride on a small boat on her way to a wedding ceremony. The rural setting of the film, where industrial wastelands are already developing, is a strong reminder of Japan’s economic decline in the 1990s. It is not the setting for a perfect idyll and, like the open ending, suggests the frailty of existence. However, this ambivalence also shows that love and happiness are always possible, as long as we are prepared to move out into the light.